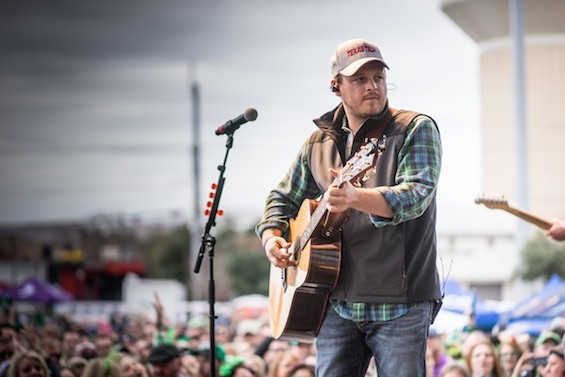 Mike Brooks
Josh Abbott Band will play the inaugural CFW Festival in Arlington.
The Dallas-Fort Worth area loves to throw festivals. Whether people love attending them usually depends on the draw.

Celebrations that work to combine arts, drink and food with live music tend to work the best. Index Fest (formerly known as Untapped) and the Wildflower Arts & Music Festival in Richardson have been consistent winners. On the flip side, a few festivals have struggled to maintain a sizable presence, and some, like the multicity Lonestar Texas Festival have failed to lift off the ground. But you can’t keep Texans down. Their can-do attitude has kept organizers coming back again and again with new ideas.

This spring and summer offers an array of new daylong and weekend gatherings that will attempt to leave their impressions on area lovers of food, spirits and music. On April 13-14, the inaugural CFW Festival (craft beer, food and wine) will be on the grounds surrounding Globe Life Park in Arlington. By including the area’s premier craft beer and wine brands, celebrity chef and local restaurant pop-up tents, and a music stage featuring several national recording artists, this venture aims high and is primed to make a strong regional presence.

“We’re hopeful that we’ll get about 15,000 people through the gates — 5,000 on Friday and 10,000 on Saturday,” says Lindsey Hopper, director of tours and experience at Globe Life Park and the spokeswoman for the CFW Festival.

Logistically, the festival is modeled after the Academy of Country Music’s 2015 Party for a Cause. That year, as the awards ceremony took over AT&T Stadium, much of the gala and many of the corresponding events took place in and around the adjacent Globe Like Park.

“Everything this year pretty much takes place on the north side of the ballpark, from Road to Six Flags and all over the north lawn overlooking the lake,” Hopper says.

The secluded area of greenery stands out among the concrete sprawl that occupies much of the massive entertainment district. If you’ve ever caught a glimpse of the Rangers’ postgame fireworks from that spot, it’s easy to envision the area hosting festival-goers.

The influx of regional beverage and food options is impressive. Hopper says the lineup is growing, and a complete list will be available soon on the event website. Locked in, though, is a pretty diverse music setup that will run both Friday and Saturday evenings.

“We wanted to appeal to the masses here,” Hopper says. “It was important to have music for everyone coming out to the festival."


“We wanted to appeal to the masses here. It was important to have music for everyone coming out to the festival." — Lindsey Hopper, CFW Festival

The music certainly stretches across genres and age demographics. Young the Giant headlines Friday night’s alternative indie-focused lineup. Best known for its singles “Cough Syrup” and “My Body,” the California band specializes in frenetic, adrenaline-fueled jams that continuously pop up on commercials and in film scores.

Nashville-based alternative R&B artist Reginald Lamar Williams Jr., aka R.LUM.R leads things off Friday. His song “Frustrated” was one of Spotify’s most downloaded songs of 2016, and his recent work has garnered critical acclaim from NPR and Vibe.

Saturday is earmarked for country music. Veteran ensemble Lonestar brings 20-plus years of Billboard chart-toppers to the stage before giving way to the Josh Abbott Band, undoubtedly one of the area’s biggest draws.

“Josh Abbott Band is local, so they made perfect sense, and Lonestar has such a classic presence around these parts,” Hopper says. “When we brought them up as a potential act, people here in the office couldn’t believe how many songs they remembered from their catalog."

With a central location, a bevy of craft beverage and food options, and a genre-inclusive music lineup, the CFW Festival is ready to take in its audience and perhaps become a regular event.

“We are all in for this year and hope that the event grows into an annual event,” Hopper says. “We hope that it grows into Texas Live and the new ballpark.”