Arlington Wants to Build the Largest Esports Stadium in the U.S. 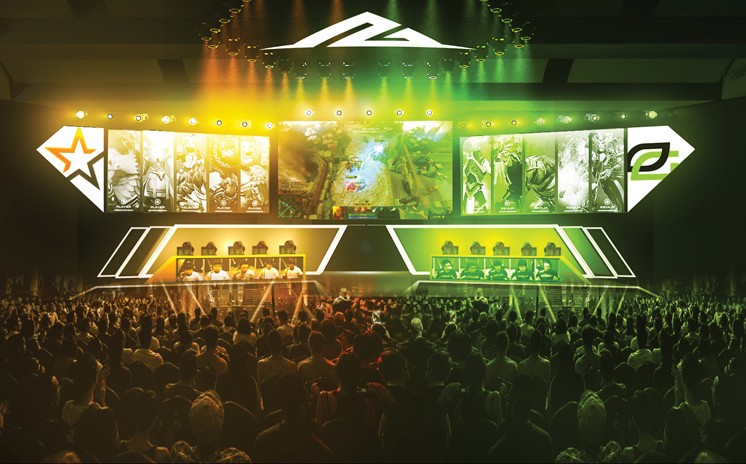 Artist's rendering courtesy city of Arlington
Arlington already has the largest local monopoly on professional sports with Globe Life Park, AT&T Stadium  the University of Texas at Arlington's Maverick Stadium. Now it wants to gain an even greater foothold by making one of the biggest public investments in competitive gaming.

Arlington officials this week announced they plan to build the largest esports complex in America, a $10 million, 100,000-square-foot facility called Esports Stadium Arlington that would transform the Arlington Convention Center into a space dedicated to housing competitive gaming bouts, as well as other facilities for esports teams and fans.

"Being on the forefront of new ideas and setting trends is in our DNA and part of who we are as the American Dream City," Arlington Mayor Jeff Williams said in a statement. "Esports Stadium Arlington will further cement our city's status as a national and international tourist destination. Players and fans will come here for the tournaments and they'll stay even longer to experience everything Arlington has to offer."

The project will be a joint venture of the city, the sports architecture firm Populous, and Esports Venues LLC. The entertainment marketing firm NGAGE Esports will manage the new facility once construction is complete. Esports Venues will have a 10-year lease, with a 10-year renewal option, with the city. The city plans to recoup the money it will spend through lease payments, revenues collected from the stadium's events and naming rights for the facility.

"This esports stadium will transform the Arlington Convention Center and position the city as the epicenter for esports in the heart of North America," Populous senior principal Brian Mirakian said. "Esports fans will encounter a live experience unlike any other by way of space for up to 1,000 spectators, VIP amenities year-round event potential."

The city hopes this venture will bring another live competitive event to the area in a new sports venture that's growing on both the competitive and professional levels. The Dallas-Fort Worth area is already home to several professional teams, such as the newly formed Dallas Fuel in Blizzard Entertainment's Overwatch League. The Call of Duty team OpTic Gaming and Team EnVyUs, a professional Counter-Strike team, recently relocated their headquarters to Dallas. Team EnVyUs CEO and owner Mike Rufail said in a recent Observer cover story that Dallas has a "stranglehold on esports."

artist's rendering courtesy city of Arlington
The UTA Esports student league achieved national attention after winning last year's highly competitive and lucrative Heroes of the Dorm college tournament for Blizzard's Heroes of the Storm game. The team earned $75,000 in scholarships and attention from university officials who are lending their support to the students for future events and the next big competition. The University of North Texas is also starting an esports team and has built a practice facility called The Nest in the campus media library.

Christian Gross, a junior who serves as the president of UTA Esports, said "it's incredibly exciting" to know that the city will have a massive space dedicated to competitive gaming.

Gross says this major investment from the city of Arlington means that the hard work of eports athletes and others is starting to get attention.

"It's technically a small victory in the long run, but the people haven't had the reputation or notice of their city and university. Seeing something like this is an actual action towards helping us for the future, and it means everything to them," Gross said. "I'm glad I could be a part of it."


Arlington has been working on plans for its esports facility for the past several months. Gross said he was involved early the planning stages.

"I was really impressed with how much they researched esports and saw the needs of a collegiate and professional organization," he said. "We have to play with the same number of players, and we have support staff like coaches, analysts and researchers. You can tell they took all this into account.

"We've had some big ideas for events, but we really didn't see any space ... but I can see them coming to fruition now because of this announcement."

Gross said UTA Esports hasn't made any official deals with Arlington regarding the new facility, but the city's interest and investment are a victory.

"This feels like it's a huge 'W,'" Gross says. "It's a giant 'W' that I see everyone around is taking notice of, which is hilarious because Heroes of the Dorm is one of the largest esports tournaments in the world. That was our entry ticket and our way to get people to listen that we're doing something magical. This past year, it's been, 'We see you, now back it up.' Now it sounds like we are backing it up, and we are doing things correctly and going in the right direction."