Karen Gavis
Victor Smith, 65, is a former electrician from upstate New York.
If you can get your hands on them, Victor Smith’s pasta roses are a must-eat at Scarborough Renaissance Festival.

Smith, 65, has cooked at the medieval festival — open through May 28 — for more than three decades. Before that, he was an electrician between jobs living in upstate New York when a friend suggest he attend his first Renaissance festival.

“I used to fence saber,” he says. “So they put me in a costume, and I was walking around fighting people for no reason.”

The next year, Smith ran a food booth. Now, in a dusty pasture on the outskirts of Dallas, he has five: Pasta Palace, Baron’s Bavarian Boar Haus (which his brother Vince runs), Peasant Bread, Fish & Chips and the Bakery, which features fresh-baked goods.

“I’m not formally trained at all,” he says from an office filled with cookbooks and fermenting apple sauerkraut. “But I’ve always been interested in eating.”

“Usually, on Mother’s Day weekend, he’ll do pasta roses,” she says. “Pretty much everyone who works at the festival lines up to get them.” 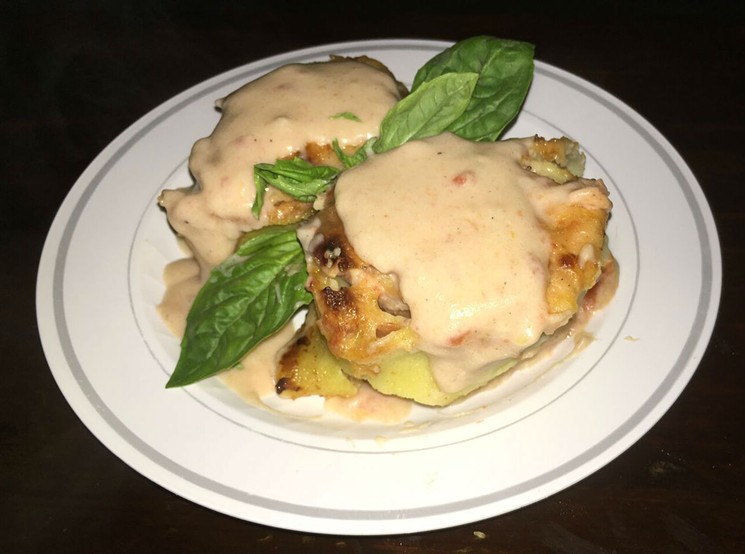 Smith's pasta roses are a popular dish on Mother's Day weekend at Scarborough Renaissance Festival.
courtesy Helaine Thompson
Smith makes a large sheet of pasta and layers it with almost see-through prosciutto and thin provolone before rolling it up like a jelly roll and slicing it into one-inch circles. The roses are loosely set so they can open up, he says. He then presses the pasta down with a ladle before pouring a scoop of rose sauce — made with cream sauce, tomato paste, nutmeg and parmesan — over each of them.

“If you look at them with a lot of squinch, they look like roses,” he says. “They’re really rich.”

It’s best to arrive early. The roselline di pasta made a showing on Sunday’s menu during the opening weekend of the festival and sold out.

Smith’s menu, which reflects what’s in season, changes daily. He says a lot of people appreciate the fact that he’s always serving something different.

“Here [at Pasta Palace], there’ll be three salads, one or two Italian desserts, pesto, I always have pesto,” he says. “I have four kinds of calzones, but the dessert, it and the pastas, except pesto, will change.”

Bratwursts and Reubens are also popular, as well as Smith’s chicken schnitzel, which consists of chicken breast pounded thin, battered, deep-fried, and served with cucumber salad and lemon slices.

Thompson says Smith has built up a following over the years.

Smith is typically manning his station at 6:30 a.m. If he’s lucky, he’s out of there at 10:30 or 11 p.m. He says he doesn’t usually lose experienced staff, which, along with good ingredients, is part of his secret. He makes his own mustard and gets his brats and sausage from Fischer’s Meat Market in Muenster. He also says the fact that the festival is only open on the weekends gives him all week for menu development.