Texas Backs Off Changes That Could've Led to CBD Confiscation, for Now 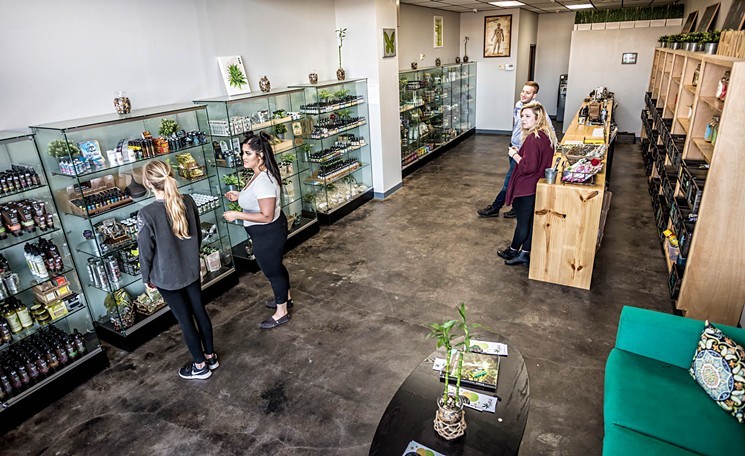 Danny Fulgencio
Inside one of CBD Kratom's two Dallas stores.
The Texas Department of State Health Services has tapped the brakes on a proposed protocol that could've seen all food and supplements containing cannabidiol oil removed from Texas store shelves, thanks to a deluge of comments sent to the agency last month in support of the products.

"The protocol that was proposed had only addressed hemp byproducts in food, and the public comments we received made it clear that CBD was being added to a wide variety of products," Texas DSHS spokeswoman Lara Anton said in a statement to the Observer. "After reviewing the comments, we realized that we needed to gather more information about the use of CBD in other types of products before making any decisions on how to enforce existing laws that apply to foods, drugs and cosmetics. We are gathering more information before deciding how to proceed."

Under the rules proposed by the department last month, any food product or supplement that had "a statement on the label, in the ingredient statement, or any other material indicating that the products contains phytocannabinoids, CBD or THC," would be subject to confiscation during a DSHS inspection.

Such a regulation would've been bad news for the shops, evocative of dispensaries in states with legalized marijuana, that have popped up around Dallas over the last year or so selling food and supplements boasting of the benefits of CBD oil, which is derived from hemp and used in smoothies, brownies or capsules. The products contain trace amounts of tetrahydrocannabinol, or THC, less than the federal limit of 0.3 percent. THC is the main compound in marijuana that gets users stoned. Cannabidiol, or CBD, doesn't have that effect, but some say it relieves pain, anxiety, spasms and a host of other ailments.

Dafna Revah, the co-owner of two shops named simply CBD Kratom that sell CBD products in Oak Cliff and Knox-Henderson, says she hopes that Texas DSHS will be swayed by public sentiment in favor of CBD products.

"It's great. I think that in the public comment period that they had, they saw how much the public just wants to continue to be able to get CBD products," Revah says. "I don't know what they were really trying to do — whether they were just trying to get businesses to stop selling products that they really didn't like — but I thought it was interesting that they just put it on hold and didn't say what they were going to do in the future."


"We just keep doing what we're doing. We've seen [similar rules proposed] in other cities and other states. It's just how it goes." — Dafna Revah

Revah says that the stores she owns with her husband will continue on the same path, even facing the specter of potential changes in the way Texas enforces rules regarding CBD products.

"We just keep doing what we're doing. We've seen [similar rules proposed] in other cities and other states. It's just how it goes," Revah says.

Attorney Richard Cheng of the law firm Dykema Cox Smith sent a letter to DSHS on behalf of the Texas Cannabis Industry Association after the draft rules were released, arguing that the Texas Department of Public Safety, rather than DSHS, "is the designated state agency to govern issues related to cannabis and cannabis related products."

He said Tuesday that he is glad DSHS is slowing down the process.

"They feel that, if this stuff is out in the public, it's going to do harm to the general public," Cheng says. "I can understand their position. I certainly don't want to minimize their concerns, but I don't think they've exercised the appropriate route to work in collaboration with people who have spent more time in this arena versus just going off and taking a position."