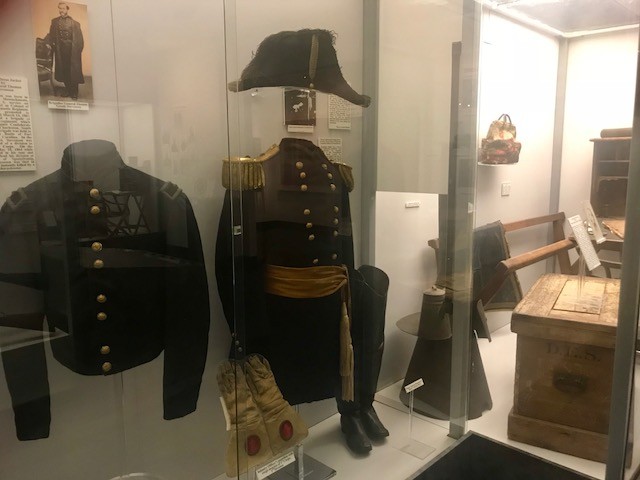 While the Texas Civil War Museum might not be the final resting place for Dallas’ Gen. Robert E. Lee statue, the museum’s director says the Southern-style structure may house a ghost.

Executive director Cindy Harriman, who’s been with the museum since it opened in 2006, seems to contain as much information as the museum did relics. She points out the rows of Civil War uniforms stored inside locked glass cases — blue coats are displayed along a north wall while a line of grey coats faces from the south.
Harriman has never seen an apparition while at work, she says, but if ghosts exist, the place might have one.

In one showcase, a military uniform worn by Maj. Gen. Benjamin Butler, who commanded Union troops during the occupation of New Orleans, is on display. Judging from his Union blues, Butler was a large man. Harriman explains how he was nicknamed “The Beast” and wasn’t too popular among the ladies of New Orleans.

Displeased by the federal occupation, women painted tiny images of Butler inside their chamber pots and then dumped the contents on soldiers' heads from balconies, Harriman says. Riled by the women’s actions, Butler issued an order, published in the Daily Picayune, that read, in part, “When any female by word, gesture or movement shall insult or show contempt for any officer or soldier of the U.S. she shall be regarded and held liable to be treated as a woman of the town plying her avocation.”

“Plying her avocation” was sort of longhand for “prostitute,” and Butler was later relieved of his command.


“Plying her avocation” was sort of longhand for “prostitute,” and Butler was later relieved of his command.

Harriman says that while the Texas Civil War Museum was being set up, Hurricane Katrina struck the Gulf Coast. Butler’s items were the only artifacts in a glass case in which a motion-sensitive alarm went off three times during the storm.

Other areas of the museum contain swords, guns and medical instruments from the Civil War, including amputation kits, crudely made scalpels and a wooden medicine kit containing a large amount of empty glass vials that Harriman says held an officer’s prescriptions.

A small wood carving of Gen. Robert E. Lee on his horse, Traveller, can also be seen.

Among the fashions on display are haute hats from a time when high style meant splaying a whole bird atop one’s head.

“This looks like something straight out an Alfred Hitchcock film,” Harriman says, referring to a blackbird hat.

The museum's summer speaker series, which occurs Saturdays through Aug. 4, will include a July 28 lecture titled Patriots in Petticoats about the role of female spies during the Civil War. According to Harriman, women threw lavish parties for the soldiers and eavesdropped on their conversations. Their skirts were also grand enough to smuggle an array of items to their desired destinations.

Past the museum’s ball gowns sits an antebellum dollhouse complete with Victorian-era furniture. Harriman says she placed a miniature image of Butler inside the chamber pot in one of the bedrooms. She points to a miniature dresser drawer that's upside-down along a wall in the bedroom.

Harriman has no idea how the tiny drawer landed there, she says, but guesses it might have been jarred loose by a passing airplane or big rig rather than a phantom.