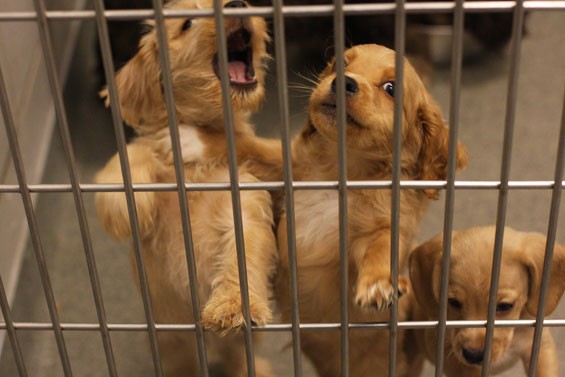 Mark Graham
Three puppies who would likely not be subject to any kind of dangerous-dog ordinance at Dallas Animal Services.
After a number of high-profile dog attacks, including the summer 2016 mauling death of Antoinette Brown in South Dallas and an April attack near Fair Park, Dallas is prepared to strengthen its dangerous-dog ordinance and establish criminal penalties for owners whose dogs attack.

Ed Jamison, the head of Dallas Animal Services, said Monday that something had to be done to improve the process. Under Dallas' current ordinance, he said, owners of dogs that the city attempts to have classified dangerous simply turn the dogs over to Dallas Animal Services to be euthanized when it becomes apparent they're going to lose their cases. He said judges are reluctant to issue tickets to the owners whose dogs are about to be killed anyway.

"For too long, just the animals have been paying the price, and there has not been anything being tied to the human," Jamison said. "The bulk of the tickets we [write] are gone once the animal is surrendered and euthanized. I don't think that's fixing the larger problem in Dallas."

Under the new ordinance, set for a June 27 City Council vote, a Dallas resident can receive a Class C misdemeanor citation when he or she fails to secure a dog and it bites another person away from the owner's property. Texas law allows owners of dogs who attack people to be charged with third-degree felonies, but only if they're found criminally negligent. The Dallas law would have no such requirement.

Pleasant Grove City Council member Rickey Callahan, who frequently has brought up the issues of loose and dangerous dogs in his neighborhood, praised the new rules but said that he'd like the law to cover dog-on-dog attacks as well.

"I really believe this is rational, practical and commonsensical," Callahan said. "For us to just continue to sit on our hands is, to me, mindless ... but I do think we need to go that next step even to dog on dog. You know there's a lot of big dogs attacking little dogs."


"The sort of obvious answer is that we ought to beat severely the owners in these situations." — Philip Kingston

Council member Philip Kingston praised Jamison for doing the best he could but suggested an alternative fate for owners whose dogs bite.

"The sort of obvious answer is that we ought to beat severely the owners in these situations," Kingston said. "But that, obviously, isn't something we can do as governmental entity, so you're doing the best you can under the legal framework."

After a bite or an incident during which Dallas Animal Services concludes a dog behaved aggressively, the agency evaluates whether the dog should be classified as dangerous. Under the city's current ordinance, owners of a dangerous dog can either follow the rules established to keep it in the city — such as spaying or neutering the animal, registering the dog with the city and keeping the dog secured at all times — take the dog out of Dallas or hand it over to Dallas Animal Services to be killed. The new ordinance would get rid of the second option, which Jamison said makes it tricky to know which dangerous dogs remain in Dallas.

Those dogs that land on the naughty list under the new rules would be featured in an online directory of dangerous dogs along with their addresses.