Dallas Is the Forbidding City for Many Renters 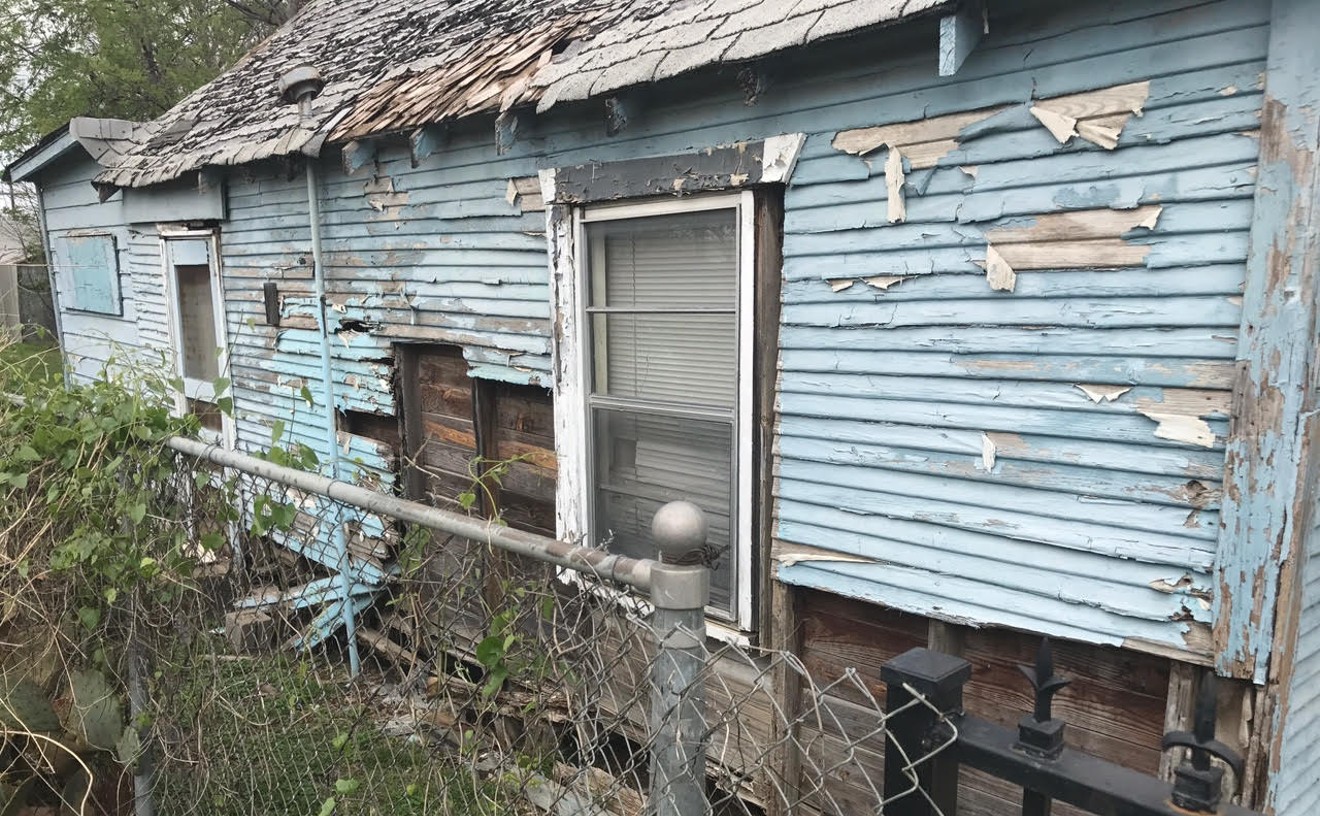 Khraish Khraish
This house, three doors down from the home of former Dallas City Council member Monica Alonzo, is more than what many people can afford.
Here’s a hobby. Spend some time finding out how many places in the United States you can’t live. Well, places where you can’t live if you also want to eat.

Then here’s a thought. Quit feeling sorry for yourself and find out how hard it is for people to live and eat right here. It’s pretty shocking.

The high cost of living indoors is what’s driving all of these shelter-related stories in the news these days —homelessness, affordable housing, gentrification, displacement. It’s all about people trying to get in out of the weather and having a very hard time doing it.

The Dallas/Fort Worth/Arlington region is one of the 10 most harsh environments in the country for extremely low-income families seeking shelter, according to a recent report by the National Low Income Housing Coalition. Only Las Vegas, Los Angeles, Orlando and Sacramento have fewer houses than Dallas/Fort Worth for people at the bottom end of the scale, according to the study.

When you look at the numbers, it’s easy to see the squeeze. In our area, we have 19 affordable rental units for every 100 poor families that need them. That’s a lot of people looking, doubling up, living on the street.

But the housing crisis is by no means only a story about the very poor. In terms of sheer numbers, the even bigger story is about people who aren’t poor. They’re just not rich. They have decent jobs. They draw paychecks. They might be … uh … you? Not to pry. They have incomes, but they still have one hell of a time finding a decent place to live that they can afford.

Another really interesting study, this one by Attom Data Solutions, zeroes in on local markets to see which is cheaper, buying a house or renting. The study concludes that in 54 percent of American housing markets, rents are so high you’re better off trying to buy.


The Dallas/Fort Worth/Arlington regions is one of the 10 most harsh environments in the country for extremely low-income families seeking shelter.

It’s kind of interesting to compare Dallas County with surrounding counties in the region. Ellis County south of us is a way tougher rental environment at 44.5 percent of average weekly wages, but that has a lot to do with the average weekly wage in Ellis being a third lower than the average here. Yes, Ellis is a tougher place to live and rent, but, then, you know, it’s also a tougher find people with safe truck tires in Ellis County. Ellis is just tougher.

Rockwall County, by the way, is even tougher than Ellis and for the same reason — even lower wages. Those people must be driving on the plies.

Collin is closer to the Dallas County equation. The average wage in Collin is slightly lower than ours. Our income is a tad higher, but average rent here is exactly what it is in Collin County. We’ve still got a little bit of tread left on our tires.

As I said at the top, there are plenty of places in America where most of us can’t afford to live at all. Forget about it. It’s hard to figure out how the people who do live there pull it off.

According to that Attom Data report, it takes 79.5 percent of the average local wage to pay rent in Marin County north of San Francisco. I met a person at a wedding not too long ago who is involved in affordable housing in Marin County, and she told me her worst problem was rich people trying to move into the few available rent-controlled affordable units.

Maybe it’s a trend. Chart it out. If the lines on the graph keep moving in the same directions, maybe 10 years from now, we’ll have people from Preston Hollow trying to sharp-elbow their way into public housing.

Here’s the constant — the thing that does not change. Human beings need shelter. We’re not Hereford cattle. At a certain point, shelter is a matter of life and death. The extent to which shelter becomes hard to find is the extent to which it becomes a central and pivotal political issue.

Only a few years ago, the basic availability of housing wasn’t even on the radar for Dallas’ old-guard leaders. They thought the big issue was attractive housing.

The whole eviction crisis in West Dallas last year came about because the mayor and City Council passed a much stricter new building code for rental housing without even thinking how that might affect supply. Some landlords had been able to charge very low rents while barely staying within the law according to the old looser building code.

One in particular, Khraish Khraish of HMK Ltd., took one look at the new code and decided to get out of the landlord business, which would have meant hundreds of evictions. That situation is still being litigated.

The amazing thing, looking back, is this: In the midst of an affordable housing crisis, very few people at City Hall even thought about the effect they might have on very poor renters by passing a law making it harder for landlords to make a profit.

My guess why that happened is based on two assumptions. They didn’t know there was a crisis. And most of the people involved operated out of a basic bias against anybody who rents to the poor, as if landlords are always the source of the problem, never the solution.

In the last year in particular, Dallas has come to a much more sophisticated perception of the housing problem. City Council members in the three inner-city council districts — Scott Griggs in District 1, Adam Medrano in District 2 and Philip Kingston in District 14 — have succeeded through basic jawboning in persuading developers to include significant numbers of affordable housing units in new projects and major renovations.

The highest levels of construction have been in Kingston's and Griggs’ districts, where until very recently developers were under no legal obligation to provide affordable units. But Kingston says only two projects in his East Dallas district have been built without affordable units in the last four years, an achievement he calls, “a credit to the developers, too.”

In Griggs’ North Oak Cliff district, very substantial numbers of affordable units have been built, some as 20-percent increments to market rate projects, some in projects that are 100-percent affordable. Griggs, meanwhile, was the principal shepherd on the City Council of a new comprehensive citywide housing policy passed unanimously by the council May 10. One of its goals is the proliferation of affordable housing throughout the city.

The dearth of affordable housing, after all, is as much opportunity as burden for the city. The less of it there is to go around, the more important an asset it becomes.

Khraish, mentioned above, still owns a lot of land in West Dallas, a part of the city that is rapidly gentrifying but still beleaguered. Like other people who own land there, he’s interested in seeing the area grow more stable and in seeing lot values rise. 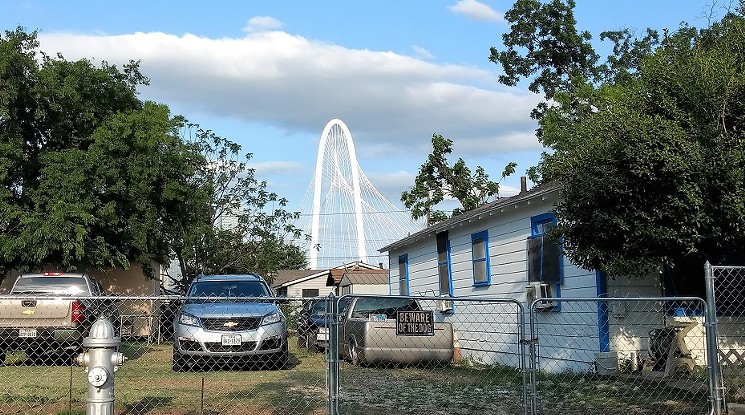 Erection of a flashy new suspension bridge to West Dallas set off a wave of land speculation and displacement.
Jim Schutze
Toward that end, Khraish recently announced his private program to develop new low-cost houses for police officers and firefighters, possibly also teachers, on the theory that a solid base of public-service occupants will spur more investment and improve the area. When I first reported on that effort, I got a lot of cynical responses from some readers telling me the inner city is the last place any cop, firefighter or teacher wants to live. And that’s what I would have thought. I don’t know about firefighters and teachers, but my experience over the years with cops has been consistent: Cops who work in the city live in the ’burbs.

But since the story ran, I’m not so sure about that. Our new police chief is pushing incentives to keep police officers inside the city. And I am hearing from some cops who say they’d like to learn more about Khraish's idea.


Maybe 10 years from now, we’ll have people from Preston Hollow trying to sharp-elbow their way into public housing.

We are almost three-quarters of a century into a housing trend that began after World War II, in which all levels of government churned out massive subsidies to encourage suburban sprawl. Those numbers I cited at the top for our surrounding counties are an indication that the affordable housing crisis is by no means specific to the inner city. It looks from the numbers more like it gets worse the farther out you go.

In that context, the Khraish idea — using affordable housing as bait — is sort of brilliant. The real asset, the thing that builds cities, after all, is not structures. It’s people.

Just think what it would do for the city to attract a flock of cops, firefighters and teachers back into urban residential neighborhoods. And while we’re at it, what about framing carpenters, car mechanics, jewelry salespersons and journalists? OK, strike that last one. They were never able to leave, anyway.

The city or place that gets there first wins. It will be the one that succeeds in creating a healthy, safe, affordable climate for people who work, including well-paid work for them to do. Then you have my personal dream. Everybody’s got new tires. I can hear them squeaking on the brand-new pothole-free pavement even as we speak.