Babe in the Woods: The Cowboys' Color Man and His Son Endure a Black Period

courtesy Babe Laufenberg
Luke Laufenberg and his father, Babe, at a Mesa Community College football game.
By the time Luke Laufenberg sat down at Mia’s, his life was destined to get worse before it got better.

“I was eating alone, hoping the pain in my bones would just sort of magically disappear,” Luke says of his lunch in December. “But before I could finish, it was excruciating. On a scale of 1 to 10? Eleven.”

The iconic Tex-Mex restaurant on Lemmon Avenue in Oak Lawn served as the unofficial launching pad of the Cowboys’ 1990s dynasty. Jerry Jones and Jimmy Johnson scarfed enchiladas and sipped margaritas there in 1989, the night before the Arkansas oil tycoon was unveiled as the new owner of America’s Team. At the club’s Valley Ranch headquarters less than 24 hours later, Jones announced he was firing legendary coach Tom Landry and replacing him with Johnson, the bombastic, successful college coach with zero pro experience.

After a tortuous rookie season in which the Cowboys went 1-15, the Jones-Johnson duo eventually grew healthy enough to win consecutive Super Bowls and propel the franchise into an unprecedented three championships in four years.

“There’s some history in that place,” Babe Laufenberg, Luke’s father and former Cowboys quarterback, says with a laugh about Mia’s. “We’re hoping Luke makes a successful recovery as well and goes on to great things in his life, too.”

By all indications, Luke has already endured his 1-15.

A successful season — one that attracted the attention of major college scouts — climaxed in Mesa’s appearance in the Valley of the Sun Bowl on Dec. 2. With Babe in attendance, Luke caught three passes in the first half before a sprained ankle limited his effectiveness.

Nonetheless, he had sufficiently showcased his skills and potential. Mesa was merely a stepping stone and almost in the rearview mirror.

“I felt normal. Felt fine,” Luke remembers. “I’d gotten sick a couple times in the fall, but nothing out of the ordinary.”

“It was an exciting time,” Babe says. “Everything was in front of him.”


Burkitt leukemia randomly affects only 1,200 Americans per year, flooding the victims' blood and bone marrow with dangerously high numbers of white blood cells. Doctors determined the disease had been in Luke's system and was beginning to ramp up during the bowl game.

During a workout three days later, he noticed weakness in his lower body that made performing his normal squat regimen difficult. Then during a run a week after the bowl game, that weakness intensified into debilitating pain.

“From my lower back … all the way down to my ankles,” Luke says. “I knew something wasn’t right. So I called my mom.”

Joan Laufenberg, a retired nurse practitioner whose specialty was pediatric oncology, directed her son to visit an urgent care facility on campus. The diagnosis? Flu. The treatment? Fluids, rest and Tamiflu.

“I was sort of relieved. But at the same time, this didn’t feel like any flu I’d ever had,” Luke says. “The pain was already so bad that my roommate had to drive me to the clinic. It would just come and go randomly.”

At the airport to fly home to Dallas the next week, Luke was in so much pain that he couldn't walk long distances without doubling over. He was forced to call a cart to transport him to his gate. But once home, he visited his regular doctor and received a steroid shot that drastically — albeit temporarily — relieved his symptoms.

“I felt good enough one night to go play basketball,” he says. “But it didn’t last.”

“I can’t begin to tell you how tough that was to see,” Babe says. “He’s a tough kid. Football player. Young. In great shape. But he was just on the floor, writhing in pain. I still tear up just thinking about it.”

That night — Dec. 15 — the Laufenbergs took Luke to Presbyterian Hospital on Walnut Hill Lane. The pain was controlled. The tests began. And although Babe's mind was a million miles from football, he got on an airplane to accompany the Cowboys to Oakland, where he would serve — as he has since 1996 — as color analyst alongside play-by-play voice Brad Sham on the team’s official radio broadcast.

“I knew something was up, and I was clearly worried,” Babe recalls about his unsettling trip to the West Coast. “But this came totally out of the blue. Hoped and thought it was just some sort of virus that would run its course. Cancer wasn’t in the equation at that point.”

Babe had dealt with disappointment in Dallas before.

Luke played football for Mesa Community College and attracted the attention of major college scouts until he fell ill.
courtesy Babe Laufenberg
In 1990 — the season after 1-15 — the Cowboys were poised to earn a surprising playoff berth. Behind rising young talents Troy Aikman, Michael Irvin and Emmitt Smith, a 3-7 start became a 7-8 record. A victory over the 4-11 Falcons in Atlanta in the regular-season finale clinched a postseason game. Only problem: Aikman was injured in the previous week’s game. His backup? You guessed it.

A journeyman who played for five teams during an eight-year NFL career, Babe was thrust into a high-profile, must-win game for football’s most prestigious franchise. His performance was ugly, bordering on disaster. Babe completed only 10 of 24 passes, threw two interceptions (one returned for a touchdown by Deion Sanders) and was sacked three times (once for a safety) in a 26-7 loss.

That pratfall, however, paled compared to his growing anxiety over Luke’s health.

“There was a lot of unknown,” Babe says. “But every day your son stays in the hospital, the more negative outcomes become a reality.”

After 10 days in the hospital, another Cowboys’ game and a very edgy Christmas, the diagnosis arrived Dec. 26 like shards of coal in a tattered stocking: cancer.

“I started crying,” Babe says, “and I really didn’t stop for a couple months.”

Doctors couldn’t pinpoint how Luke contracted the disease, but they were certain that the cancer had infiltrated 95 percent of his bone marrow and the only defense was chemotherapy. He moved to Children’s Medical Center of Dallas and immediately began five months of treatment. Over a 12-week period, he spent 10 in the hospital.

Babe, meanwhile, was lost in the woods.

Joan had experience with ill children, and Babe, as an NFL player, spent numerous holidays lifting spirits in hospitals — once even traveling to Alaska on a goodwill mission backed by the Players Association. But this was different. This was the Laufenbergs' youngest. This was Babe’s baby.

“My dad had prostate cancer, but he was 80,” Babe says. “I didn’t know much about cancer, but I got on WebMD and read everything I could. It was eyes wide open, and it was a crash course. I learned more than I ever wanted to. More than any father should ever have to.”

The doctors gave Luke a 70-percent chance of remission.

“When it comes to cancer, that’s pretty good,” says Babe, eyes welling and voice cracking. “But I also had to come to grips with the fact that that meant there was a 30-percent chance he was never getting out of that hospital. I made it a point to really go back and make sure I enjoyed and relived his first 19 years. Because there was no guarantee … ya know?”

“I wanted to make sure they knew in case my performance was off or in case my patience kind of snapped,” Babe says. “I hear people say going to work or playing games is a respite from stuff like this. But, trust me, there was no respite. I tried to get my mind off it, but there was no getting my mind off it. My mind was on it. Locked on it.”

While Babe attempted to remain positive during visits, Luke’s struggles grew harsh and impossible to camouflage. The chemo caused constant vomiting. His hair fell out. He developed a blood clot in his arm and lost his appetite, sometimes eating only one cup of yogurt per day.

By March, he’d dropped one-third of his body weight, withering from a 235-pound football player to a 155-pound cancer patient. 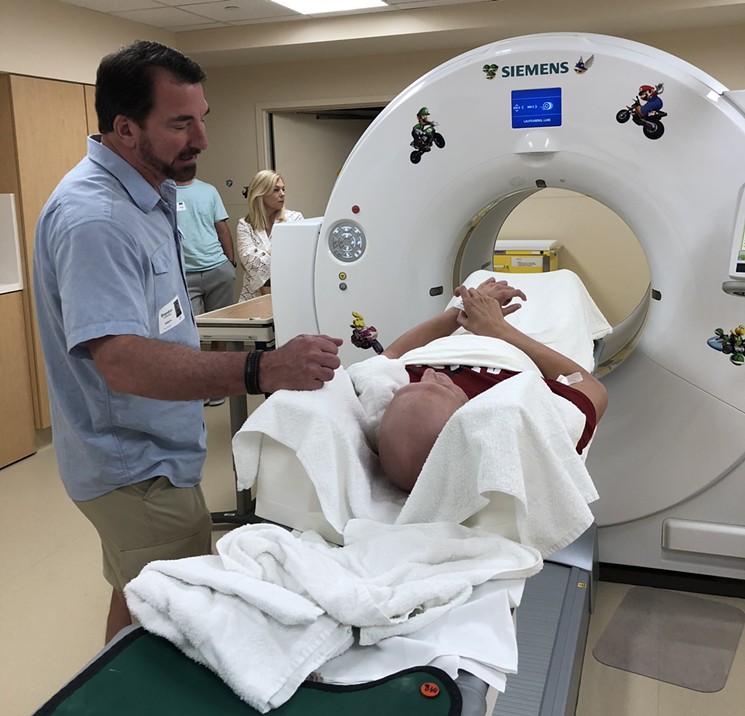 Luke endures a full-body CAT scan to locate possible cancer growth.
courtesy Babe Laufenberg
“Watching the college bowl games in January and then still being in the hospital for March Madness, yeah, that was a pretty low point,” Luke says. “I mean, I never really thought I was going to die. But I did look in the mirror when I was bald and weighing only 155 pounds and wonder if I’d ever be myself again. It was scary.

“It helped that my parents were both so positive. If you didn’t know better, you wouldn’t have even thought it was affecting them.”

Just the opposite, Babe says — several times, he calmly left Luke’s room and broke down in tears just outside the door.

“It was just heartbreaking to see him in that much pain, in that situation,” Babe says. “He was so skinny, there were bones sticking out everywhere.”

As the situation neared rock bottom, doctors told Luke’s parents that if he lost one more pound they would be forced to insert a feeding tube. Getting out of bed and walking two steps to the toilet took Luke as much as 10 minutes.

“He was just a very, very sick kid,” Babe says.

On May 3 — 146 days after he visited the clinic in Arizona — Luke received news that prompted Babe to send out the happiest tweet of his life. Under a photo of him and Luke:

"Why are we smiling on a day when Jason Witten retires? Because this tight end was pronounced cancer free today! I can say I have never been more proud of anything in my life than the way @LukeLaufenberg battled his ass off. He has shown me what it means to compete." 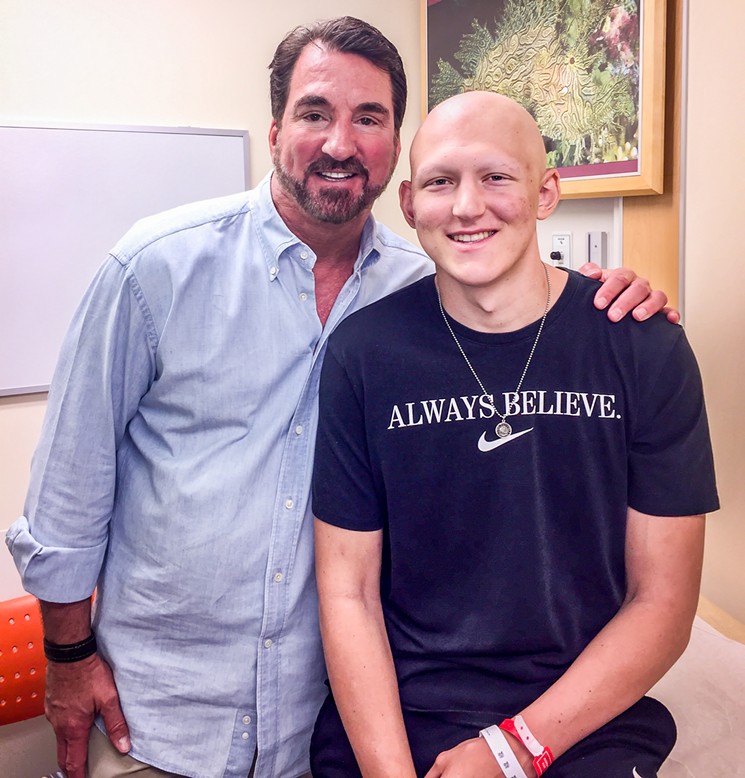 Babe and Luke celebrate Luke being cancer free after months of treatment.
courtesy Babe Laufenberg
Luke has since resumed a workout and conditioning schedule. He was on the field as an honorary team member during the Cowboys’ minicamp earlier this month. His weight is up to 210. His hair is growing back. He turned 20 on May 12 with a clean bill of health. His monthly checkups will gradually decrease to every three months and, eventually, only annually.

On June 21, Luke and Babe had just left a routine follow-up that included blood work and a monitoring of his heart, which was stressed by the chemo. They sounded upbeat. Positive. Able to peer into the future without the ominous constraints that muted the family for five months.


“I want to play football again. I don’t want having cancer to define me. I want to get it behind me and forget about it forever.” – Luke Laufenberg

“I want to play football again,” Luke says. “I don’t want having cancer to define me. I want to get it behind me and forget about it forever.”

Babe has dried his tears and unleashed the sharp wit and insight that allowed him to be the KTVT-TV (CBS 11) sports anchor for 17 years. Consider his jovial persona resurrected.

“Looking back now, it was pretty cocky of him to get the rare, fast form of cancer,” he jokes about his son. “Couldn’t get the garden variety. Had to show off.”

Mia’s feels like a lifetime ago. And not just for Jerry Jones.