DPD declined to name the law enforcement agency Sgt. Shannon Browning, Senior Cpl. Edward Van Meter and Senior Cpl. Roger Williams, turned themselves into. Their arrests are the latest in a string of alleged gambling infractions by members of the department.

According to a memo sent to the Dallas City Council on Wednesday night, the three arrests stem from an investigation into Senior Cpl. Edrick Smith.

In December, Smith was charged with gambling promotion, misuse of official information and bribery. According to an arrest warrant affidavit obtained by WFAA-TV, Sgt. Latasha Moore told DPD public integrity officers that Smith frequented a gambling hall called the Blue Dragon Events Center. Moore later recorded Smith offering her a $100 Pappadeaux gift card if she would tip him off — by sending him a "Go Cowboys" text — if a raid was coming on the Blue Dragon, according to the affidavit.
click to enlarge 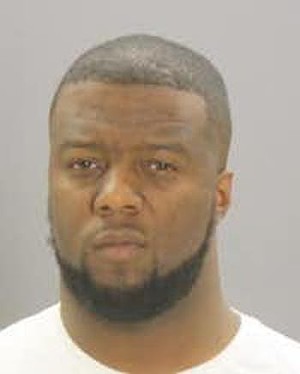 
Eventually, Smith gave Moore the gift card, according to police. He also repeatedly looked up cases and files related to the Blue Dragon on DPD's internal computer system, according to the affidavit.

On June 13, DPD arrested Moore, the officer who wore a wire to help catch Smith, on a separate gambling promotion charge after she deposited $1,600 in cash at an ATM across the street from an alleged illegal gambling operation in a Red Bird convenience store.

DPD is not releasing information about how Browning, Van Meter and Williams are tied to Smith, but the City Council memo refers to the three officers as Smith's "accomplices." Additionally, Smith has been charged with two more counts of engaging in organized criminal activity related to gambling promotion and money laundering.

Smith, Van Meter, Williams, Browning and Moore are all on administrative leave pending the investigations into their alleged crimes.