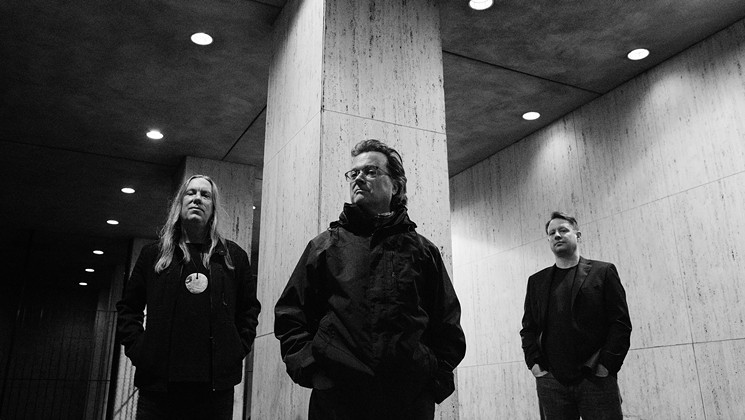 Ticketmaster
Some shows this week take place in sweet, sweet air-conditioned venues, so there's no excuse not to head over to hear the likes of soul star Musiq Soulchild at Music Hall at Fair Park or local rock darling True Widow after a movie screening at Texas Theatre. Need some nudging to get to those outdoor shows, like Thirty Seconds to Mars at Dos Equis Pavilion or Violent Femmes at the Pavilion at Toyota Music Factory? Keep reading, and let us convince you to brave the sweat and tears.

The Funky Knuckles have been together for almost a decade. In 2014, the band's second album, Meta-Musica, hit No. 1 on iTunes’ jazz chart the first day of its release. The band has played with major national and local acts such as Beyoncé, Erykah Badu, Chrisette Michelle, Talib Kweli, Puff Daddy and the Polyphonic Spree. The band incorporates elements of improv and thoughtful compositions into its sets. Last year's release, New Birth, has seen much critical acclaim within the jazz community. Diamond Victoria

Joshua Fleming, vocalist and guitarist for local cowpunk sextet Vandoliers, recently began hosting a recurring gig welcoming new songwriters at Fort Worth Live. By sharing his knowledge of the music biz, Fleming hopes to help young musicians find their foothold in the industry. During this "songwriter's night," as he calls it, Fleming plays his music and considers it a great chance to try out new material for the audience. He also wants the Monday night sets to be a way for young songwriters to hone their craft and network with local veteran musicians for potential collaborations. If you're looking to catch a first glimpse at some of the area's best up-and-coming singer-songwriters, this weekly gig is the place to be. DV

People dismiss Thirty Seconds to Mars simply because of what frontman Jared Leto does away from a microphone. Whether it's his method acting, his serious earnestness or fame because of his acting career, one can easily minimize a band that continues to have a huge audience. Sounding like a mix between U2, Coldplay and Nine Inch Nails, Jared and his brother Shannon are promoting their latest release, America. Pared down to the brothers with hired help (longtime guitarist Tomo Milicevic left the band this year), the band keeps putting out music that confounds people who don't buy tickets while speaking directly to those who buy them. Eric Grubbs

Over his almost two-decade career, Musiq Soulchild has cornered the market on alternative hip-hop with roots in '70s-inspired soul and funk, jazz, gospel and R&B. The Philadelphia native released his latest studio album,  Feel the Real, late last year. It's a Grammy Award-nominated cannon of neo-soul tracks which he helped produced. DV

Mutant Wave and Texas Theatre present a perfect pairing of music and cinema with a screening of a new 4K restoration of Jim Jarmusch's 1995 black-and-white psychedelic western, Dead Man, which stars Johnny Depp and features a score by Neil Young, followed by a one-two punch of a memorable behind-the-screen show with True Widow and Austin’s Troller. One of Dallas’ best rock bands since forming in 2007, True Widow is a trio of multi-instrumentalists known internationally for their brand of heavy, sprawling soundscapes that blend droning, fuzz-out stoner metal with reverb-heavy shoegaze and indie-rock — a truly unique sound that’s loved by metal fans, stoner bros and indie kids alike. Darkwave trio Troller’s beautiful, ominous, metal-influenced synth sounds balance out the bill perfectly. The trio formed in 2010 out of Austin's dense electronic and experimental scene and is known for compelling live performances. Troller’s members have all played key roles with indie-synth-label Holodeck Records, especially Adam Jones, who also plays with labelmates Survive and Thousand Foot Whale Claw. (Jones founded Holodeck in 2012 with members of This Will Destroy You and Pure X.) Daniel Rodrigue

Fronted by charismatic New Zealander Ruban Nielson, Unknown Mortal Orchestra — based in Portland, Oregon — has been riding a wave of momentum since its 2015 release, Multi-Love. With feet firmly planted in psychedelic-tinged dance rock, Nielson writes wordy paeans to the ups and downs of modern life. He keeps the details intact whether he's talking about cellphone addictions, political paranoia, or the dueling contradictions of balancing a healthy work and family life. Onstage, he loses himself in the moment with maniacal dance moves, stage dives and voyages out into the crowd to play guitar among the adoring fans. The band is touring behind its latest release, Sex & Food, a critically acclaimed collection of songs that demand attention and encourage dancing. Its diverse and ever-expanding catalog of songs should provide quite a bit of energy to the masses assembled Saturday night at the Granada Theater. Consider checking this one out if you're looking for an exciting evening of tunes. Jeff Strowe


Paramore
7 p.m. Saturday, July 14 at The Pavilion at Toyota Music Factory, 316 West Las Colinas Boulevard, Irving, $35 and up at livenation.com

In 2007, Paramore gave teenagers everywhere an anthem to ruin a relationship when they released "Misery Business" off their second album, Riot! Then in 2014, they gave those same teenagers, who were now entering the real world, another anthem on how much it sucks to grow up with their hit single "Ain't It Fun." Paramore hasn't slowed down, released an mostly-steady stream of albums over the past 10 years. See them in Dallas as part of the The After Laughter Summer Tour. Paige Skinner

There must be something in the famous Vaughan family blood that makes for great blues guitarists, as is made obvious by the talent of Stevie Ray and his older brother, Jimmie. After the two released an album together in 1990 and after his brother's death, Jimmie Vaughan went on to release numerous successful blues rock records and win four Grammy Awards. The Oak Cliff native returns to the neighborhood tonight with this Tilt-A-Whirl band at The Kessler Theater. DV

The Femmes have had a rocky transition from their heyday in the mid-90s. Lawyers, in-fighting, differences in musical philosophy and taste — any one of these conflicts could’ve spelled doom for a lesser band. Violent Femmes, even today, are no lesser band. The internal strife seemingly vanished after the band’s surprise 2013 reunion and even more surprisingly, the band released its first album in 16 years soon after. While We Can Do Anything flew under the radar, it demonstrated that the Femmes could still pen a good tune. Tracks such as “Traveling Solves Everything” and “Issues” showcase lead singer Gordon Gano’s distinct rising deadpan as well as the band’s oft-overlooked sense of morbid humor. There’s no instant classic nestled within the 2016 release, but for a band that nearly came apart over a Wendy’s commercial, there were seemingly far worse outcomes to consider than an adequate album debut. British new wave band Echo & the Bunnymen will join the Femmes during their appearance in DFW. The Bunnymen have a new album on the slate, The Stars, The Oceans & The Moon, which is scheduled for an October release. Nicholas Bostick

The British new wave band The Fixx, mostly remembered for hits such as "One Thing Leads to Another" and "Red Skies at Night," released a new album titled Beautiful Friction in 2012 after nine years of studio silence. The album received a warm welcome from critics in 2012 and is still a great fit into the record collection of anyone who prefers to remember the band as it was 30 years ago. DV