Paige Weaver
The interior at the new Gulabo's Brunch and BBQ in Carrollton.
Gulabo’s Brunch and BBQ is a new, fast-casual Halal and Pakistani restaurant in Carrollton. It is owned by executive chef Muzasfar Kushmiri, who has more than 10 years of experience working in kitchens in Pakistan and all over the globe.


“Our vision is beyond just the food. There’s so much more that can be done to empower women, not only in the nonprofit world, but also the small business world." - Aisha U-Kiu

Gulabo’s is operated by husband and wife team Ibrahim Choudhry and Aisha U-Kiu. The restaurant is a two-year pilot project through their organization, Gulabo’s Ventures. Independent from the restaurant, Gulabo’s Ventures offers small business consultations to DFW entrepreneurs, specifically South Asian women, with the goal of empowering immigrant women.

They opened Gulabo’s because they wanted to create a restaurant that caters to the next generation of South Asians. U-Kiu, Choudhry and Kushmiri worked together to develop a menu that plays to Kushmiri’s strengths as a chef. He is a specialist in paratha, a flaky flatbread, and kebabs.

“There’s no other chef in DFW who make paratha and kebabs like he does,” U-Kiu says.

Gulabo's caters to the next generation of South Asians.
Paige Weaver
The menu they settled on features traditional South Asian foods with a format that appeals to all audiences. The $10 barbecue basket allows you to pick a meat, a sauce and a bread. There are five options of each, including items like dangal kebab, chicken tikka boti, Texas barbecue sauce, Bastra jalapeno sauce, butter naan and laccha paratha.

There are also family-sized specials that include all the meat items they offer — at $35, $45 or $60, depending on number of sides, bread and drinks.

Gulabo’s serves brunch whenever they are open and has three menu options. There is the salt and pepper, a garden omelette served with crispy paratha; the sweet and savory, with halwa, poori, aloo and cholay; and the ginger and spice, with beef Nihari and butter naan. Prices vary from $5 to $30, depending on if you get one, two or four orders of each. 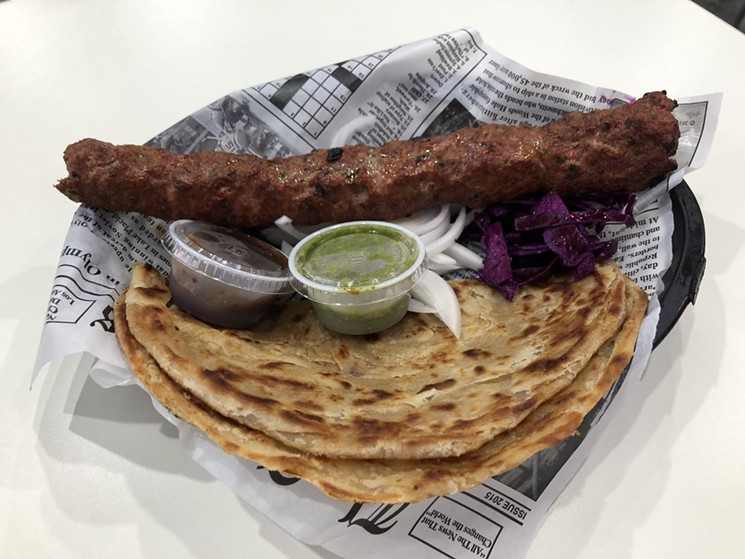 Gulabo's barbecue basket with dangal kebab, mint jalapeno sauce, tropical tamarind sauce and laccha paratha.
Paige Weaver
They also have a Halal bar centered around non-alcoholic drinks. Popular items include the Rooh Afza, a bright-red rosewater lemonade and Gulabi Chai, hot chai served with pistachio and almond shaving, a drink unique to the Kashmir region. If you want something special, ask for the mango lassi; it’s on the secret menu.

Gulabo’s soft launch was July 1 and since then, word of mouth has been strong.

“We’ve had a great response from the community,” U-Kiu says. The grand opening is still in the works.

“Our vision is beyond just the food," U-Kiu says. "There’s so much more that can be done to empower women, not only in the nonprofit world, but also the small business world. We wanted this space to be not just a restaurant. We want it to be more of a community center.”

In line with that goal, Gulabo’s Ventures just announced a $1,000 scholarship for South Asian female high schoolers in North Texas.