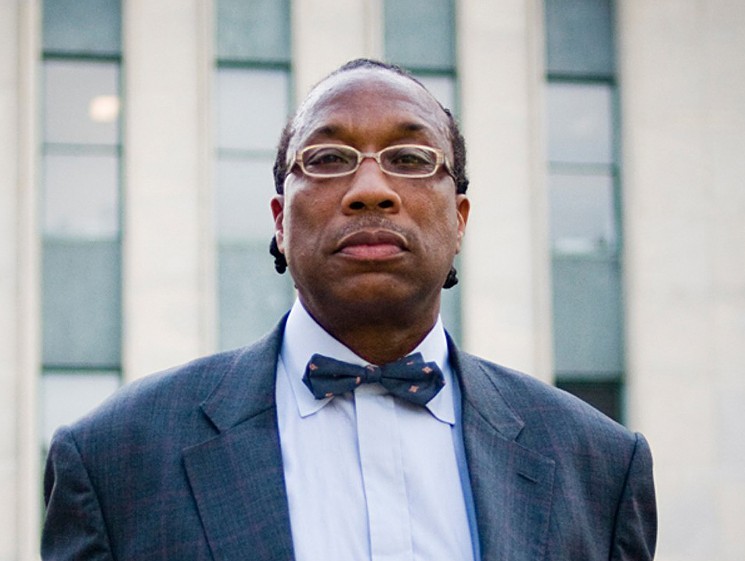 Brandon Thibodeaux
The people for whom Dallas County Commissioner John Wiley Price reserves special disdain above all others are white liberals.
In a speech to the Dallas City Council on Wednesday, Dallas County Commissioner John Wiley Price, the longest serving and most influential black elected leader in the city, warned that the most serious threat to racial amity in the city comes from white liberals.

It was vintage Price. The 68-year-old politician, in his post since 1985, has always believed in separate moral universes for black and white people, a convenient point of view that has made him rich. He despises liberals, because they tend to lack the two things Price really does respect, money and a willingness to stay on their own side of the racial divide.

During the 2017 federal fraud and bribery trial in which Price was acquitted of multiple charges, David Newsom, former top lawyer for Hillwood, a Perot company, testified he had recommended the company pay Kathy Nealy, a Price protégé, to help slow down the creation of a major new shipping center in Price’s own district that would have competed with Perot interests in Fort Worth.

The Inland Port or Dallas Logistics Center, as it was variously called, promised to be the single biggest source of employment in the history of southern Dallas. But Price didn’t care about the thousands of clean, high-paying jobs the center offered to his poverty-stricken constituents. In a derisive letter to the developer, Price said, “During slavery, everybody had a job.”

Instead, Price and his political posse demanded the developer deliver them a major ownership slice of their national family-owned business — an arrangement Price called “equity.” It was unclear if the pun was intentional.

The owner refused. Price, with a big handful of help from The Dallas Morning News and the city’s rich white oligarchs, drove the man into bankruptcy.

Price gets what he wants from rich white people. Moderates and liberals can give him nothing he wants. His constituents continue to return him to office by overwhelming pluralities because his constituents are suckers. Passed over by the civil rights movement, they still think it’s a miracle when a black man talks loud.

The issue Price spoke to the council about Wednesday was an attempt a week earlier by council member Philip Kingston, a white progressive, to get the council to name Sandy Greyson, a white moderate, to the post of mayor pro tem, an honorific title. For at least 20 years, that title has been reserved to minority council members in a patronizing gesture that shrieks old-guard racial condescension.

"Casey's record on worker, equality and justice issues is negative, so several of us couldn't support him. With black leadership so divided, we needed a compromise solution.” — Philip Kingston

The reserving of two honorific titles on the council to black or Hispanic members — mayor pro tem and deputy mayor pro tem — is a legacy of an era when the entire council was chosen behind closed doors by a private group of moneyed interests called the Dallas Citizens Council. The Citizens Council still exists, and its wealthy members are still a major source of campaign finance money in poor minority districts in southern Dallas.

The elephant in the room in all this a few weeks ago was former council member Dwaine Caraway, the previous mayor pro tem, who had been forced to resign because of corruption. Caraway, who is black, represented a district in which many families are bitterly poor. He confessed to taking hundreds of thousands of dollars in bribes from a group of white hoods who were screwing over poor children who ride the bus to school.

Kingston made the mistake of thinking that Caraway’s disgrace challenged the entire council, black and white members alike, to do something to declare their shared commitment to integrity. He chose Greyson because she probably is the only member who every faction on the council would agree is impeccable.

Kingston explained later why he chose Greyson over the two black candidates, council members Tennell Atkins and Casey Thomas, for the job: “I nominated Sandy because I honestly thought (and still think) that the council needs someone who can unite the whole council. Neither Tennell or Casey could get backing from everyone.

“I knew that going into the vote, because Tennell had agreed to nominate Casey but was also asking for votes for himself. Casey's record on worker, equality and justice issues is negative, so several of us couldn't support him. With black leadership so divided, we needed a compromise solution.”

Agree or disagree, it was the kind of reasoned political argument in which everybody needed to put on their big-girl and big-boy pants and speak to the issues at hand. Instead, the white members of the council most closely associated with the oligarchy, including the mayor, immediately pressed their racial alarm buttons as hard and as loud as they could.

The mayor said: “This is a terrific slap to the African-Americans around this council. We have three good, respectable African-Americans that represent this city well, and to say that they are less than what they need to be from a reputation standpoint is something that is very dangerous for this city.”

In his speech to the council a week later, Price made sort of a reference to citizens councils, and, again, it’s hard to know if any irony was intended. Price quoted Martin Luther King Jr.’s letter from the Birmingham jail, written in August 1963, when the famous civil rights leader was arrested during nonviolent protests against racial segregation in Birmingham, Alabama.

King wrote: “I have almost reached the regrettable conclusion that the Negro's great stumbling block in his stride toward freedom is not the White Citizen's Counciler or the Ku Klux Klanner, but the white moderate, who is more devoted to ‘order’ than to justice; who prefers a negative peace which is the absence of tension to a positive peace which is the presence of justice.”

The Dallas Citizens Council was formed as a business leadership group in 1937. White citizens councils were far-right groups formed in many cities in the mid-1950s, mostly in the South, to fight against integration.

Price also quoted Malcolm X: “You don't stick a knife in a man's back nine inches and then pull it out six inches and say you're making progress.”

And he quoted Mark Twain as saying, “History doesn’t repeat itself but it often rhymes.” It’s a statement often attributed to Twain, probably never uttered or written by him in fact, but lots of people think it was.

Then Price offered some of his own carefully scripted prose: “In those seven concise but concentric words, Twain describes Dallas by story and practice,” Price said, addressing the City Council from a podium.

“The names get changed, and the circumstances get tweaked, but we continue to make the same melodious mistakes. … Apparently African-American rhymes with lack of integrity. Apparently a problem with one black man rhymes with the issue of all black people.” 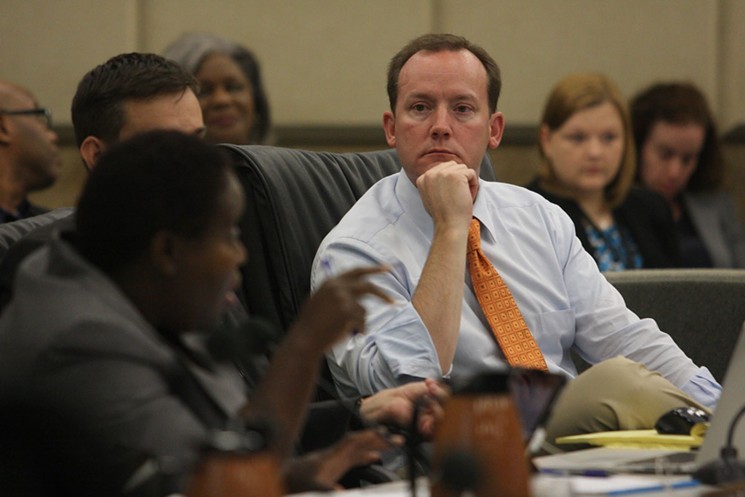 Dallas City Council Member Philip Kingston made the mistake of suggesting the council address a moral issue without reference to race.
Mark Graham
But Kingston had said nothing at all to slur black people. All of the allusions to collective guilt, all of the slurs by association in this saga were uttered first by the white Citizens Council cohort on the City Council, then by Price, the water-carrier for the Perots.

Kingston’s original motion and his explanation of it after the fact assumed, in fact, that white people and black people on the council could take shared responsibility for the terrible stain Caraway left behind when he betrayed his public duty and betrayed the children of his own district for money. It was the mayor and then Price who said that any reference to lack of integrity on the part of any black person [Caraway] must be a slur of all black people.


All of the allusions to collective guilt, all of the slurs by association in this saga were uttered first by the white Citizens Council cohort on the City Council, then by Price, the water-carrier for the Perots.

I have been aware of Price’s disdain for white liberals for a very long time. I have tried earnestly to figure it out.

Price was born in 1950. He grew up in Forney, still a country cotton town then. The vestiges of slavery were still alive in Forney in the form of black debt peonage and a brutally racist system of law enforcement and imprisonment. You could pick for the white planter or pick for the warden. Take your pick.

In the 1960s black kids were still being hauled out of their segregated schools in Forney to pick, while the white kids stayed behind in their newer better schools and studied. Those scenes, long shoulder-drawn cotton sacks pulled down endless rows behind the stooped backs of black pickers, could have taken place in 1863 as easily as 1963.

Is there something in that past that makes a man trust the white planter more than he trusts the white circuit-riding Methodist minister who preaches equality? Or is it that no trust at all is required between the picker and the planter? Just money. The more money the better, and if some tricks are involved in getting it, then that’s gravy.

Kingston’s real offense — the thing that set off the racial alarms and had all the Citizens Council people and Price jumping out of their skins — was the suggestion that the stain left behind by Caraway was a shared responsibility that the entire council could address without reference to race. The one thing neither side of the old equation can ever consider is a moral equation without reference to race.

One great irony here is unmistakable. It was the mayor and Price, in the end, who created a unity between Caraway, the defrauder of school children, and the other three African-Americans on the council. The mayor and Price are the ones who tarred with one brush, by arguing that any reference to Caraway was a reference to all.

They speak from a time in the city when white people and black people were distant tribes separated by the river of history. Eventually a few clever souls on both sides evolved a form of commerce across that river that only they controlled. Now the one thing neither side in that arrangement can afford is a bridge.