dallascityhall.com
Kevin Felder may be cuckoo, but he sure won a big one Wednesday.
Kevin Felder, the Dallas City Council member I have been calling King Cuckoo, cuckooed me big-time Wednesday I guess, winning a 13-2 vote against the South Dallas car wash that I have been defending from time immemorial.

Another big winner in the deal — this one really sticks in the old craw — was the editorial page of The Dallas Morning Pravda-Tass-News, which, as I have explained, believes that private property is theft. Like King Kooky, the newspaper also wants the city to shut down Jim’s Car Wash on Martin Luther King Jr. Boulevard for political reasons.


“I am asking you not to allow slumlords and non–residents to slither out of this.” — public speaker at Wednesday's council meeting

The car wash is just over a half-mile from Fair Park in a beleaguered but steadily improving part of segregated South Dallas. It has been a major bone of contention at City Hall since 2006, when it was at the center of an explosive Texas joint Senate/House investigative committee report.

That report found the city of Dallas was running a kind of protection racket on certain businesses that were out of favor politically. The city was pressuring those businesses to do more about reporting crime in their areas, but then the city was using the same crime reports as evidence against the businesses in public nuisance actions.

The irony in the case of Jim’s Car Wash has always been that the owner, Dale Davenport, a white guy from the suburbs, has always done everything he could and everything the city ever asked of him to fight crime. The black political leadership of South Dallas, nevertheless, blames Davenport for the sea of crime, poverty, drugs, prostitution and depravity surrounding his business — one hell of a lot of social dysfunction for one car wash to cause.

That note was struck in unison by neighborhood leaders who spoke Wednesday urging the council to come down hard on the car wash: “I am asking you not to allow slumlords and non-residents to slither out of this,” said a woman who identified herself as an attorney.

Get the white guy’s car wash out of our neighborhood, they all said, and the neighborhood will heal. And who knows? As I sat watching the parade of speakers coming to the mic to plead against the car wash, I had to admit that any similar showing by neighborhood leaders in my own part of town probably would get its way. It’s a democracy, after all, for better and for worse and in sickness and in health.

Mayor Mike Rawlings and the interim city attorney Christopher J. Caso had worked out their own little two-step before the meeting. Rawlings asked Caso to explain the issue beforehand that the council would be voting on — a bit unusual, in that normally the city’s elected leaders are expected to be able to figure that stuff out for themselves.

Caso told the council they were voting only on whether to submit the public nuisance question to an obscure appointive body called the Board of Adjustment, and then that body will decide whether to shut the business down. In a bit of clumsy sophistry, Caso tried to convince council members not only that they had little choice but to send the matter to the Board of Adjustment but also that they even lacked authority to discuss why they were doing it.

Luckily, it’s a democracy for better or for worse, so they just ignored him and talked about it anyway. Council member Sandy Greyson called the white guy, Davenport, to the podium to ask him if he had done everything the police had asked of him, like giving police permission to come in and roust his customers whenever they felt like it. He said he had, and he had a copy of the agreement with him.

The problem from the neighborhood’s point of view is that the car wash is a popular social gathering spot at night, and unlike any other business on the street, it’s very successful. One speaker complained of cars lined up in the street waiting to get in — not a problem any of the other businesses on MLK have.

Surrounding the car wash are drug houses, street prostitutes and an army of hollow-eyed crack zombies. The people inside the car wash at any given moment, however, tend to be owners of late-model automobiles.

The car owners I have met and interviewed there over the years have all been employed or owners of their own businesses. I can’t vouch for the people wandering through the crowd offering to sell odd items from backpacks. But it is what it is, and it is where it is.

Council member Philip Kingston made a very important point. When the business owner is cooperating with the authorities, doing every single thing he’s called on to do, but problems persist anyway, then that’s the authorities’ fault. 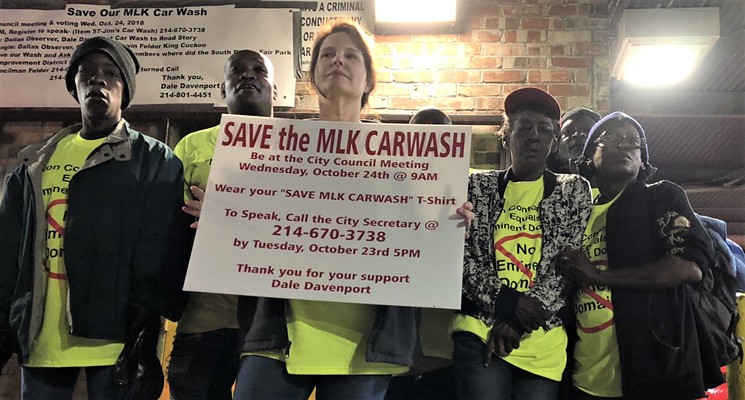 Somehow the white-owned car wash in black South Dallas just can't win for losing.
Jim Schutze
“The city is essentially acknowledging failure in its ability to support the neighborhood surrounding the car wash,” Kingston said. Under those circumstances, he said, the proper solution is not for the city to further diminish the value of the owner’s property by taking away property rights by fiat. Instead, he suggested, if the city really doesn’t like the way the property is being used, it should buy it from him at a fair market value.


“The city is essentially acknowledging failure in its ability to support the neighborhood surrounding the car wash." — Philip Kingston

None of those arguments carried the day, and the council voted overwhelmingly with Felder to send the public nuisance question to the Board of Adjustment. I will keep you posted on how that process works.

Remember this: King Cuckoo is the guy who killed a program by which people in that area were assessing themselves to pay for a hire-the-homeless program to pick up trash and for a private security guard program. The white guy, Davenport, was one of the leaders who helped overcome resistance from some business owners in the area who didn’t want to pay the tax. Davenport helped get the program established a couple of years ago.

So Felder kills the self-help program aimed at fundamental change and goes instead with the kick-out-the-slithering-white-guy crowd. And I have to admit, when I looked up at the scoreboard in the council chamber and counted the votes by which Felder had won, I wondered, “Who’s cuckoo now, Jim?”