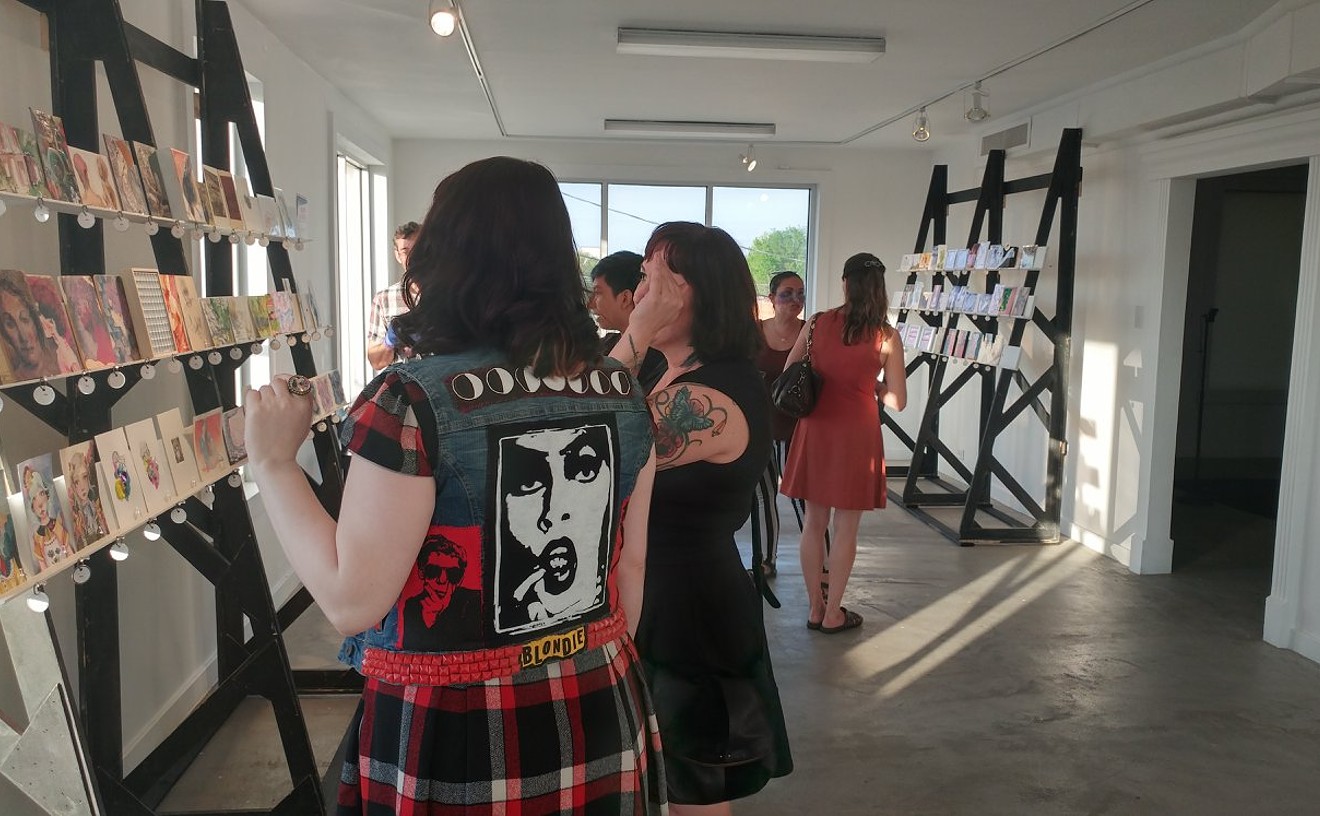 courtesy Figment
A scene from Figment Dallas' second fundraiser at WAAS Gallery in March.
After nearly eight consecutive days of rain leading up to Figment Dallas’ scheduled debut on Oct. 20, the storm had finally broken. Unfortunately the event had been canceled the day before, just as the last portable toilet was being unloaded.


“So many people from so many different aspects of our city … all these people believed in this concept enough to give their time and to help make it happen, but I was very particular about the budget.” — Suza Kanon

“The city called us the day before the event at 2 o’clock and let us know [the parks department] had determined it wasn’t a good idea because of the turf and the grass and all that kind of stuff,” says Suza Kanon, Figment Dallas’ organizer and curator.

Figment Dallas was scheduled to take place at Reverchon Park and will still be there after being rescheduled for Dec. 1. The commerce-free, daylong interactive art festival will still feature more than 30 installations from mainly local artists. But the sudden cancellation was a blow to the group’s morale and finances, if only for a moment.

After two successful fundraisers back in January and March, Kanon says she wasn’t eager to start asking for money again. Instead she and her team of volunteers rallied the artists and crunched the numbers.

“So many people from so many different aspects of our city … all these people believed in this concept enough to give their time and to help make it happen, but I was very particular about the budget,” Kanon says. “We had brunch the next day with some of the core volunteers and I did the math.”

Thanks to Kanon’s frugal spending and plenty of support, the art festival was saved and with little effect on the overall event. However, simply calling Figment an art festival is a bit misleading. There won’t be rows of tents with prints for sale, silent auctions for high-dollar items or VIP areas for those who pay a premium. Figment’s sole goal and purpose are to share interactive art with anyone and everyone interested enough to engage with it.

“We’ve had people that are like, ‘We work with this group and we want to come and we want to pass out brochures,’” Kanon says. “That’s not what Figment is about. I [would tell] them if you would like to come and do something interactive without your logo on it and talk to people about your interests, that’s totally fine. But we aren’t selling anything.”

Instead, attendees get to experience art in a way that’s hardly ever allowed within the four walls of a gallery. Everything on display will be interactive in some way. One project by art collective !BANG! will invite people to play drums on a large-scale sculpture, made of drums. Another installation called Heartbeat is a rotating LED sculpture that moves and flashes to the heartbeat of the person interacting with it.

There will even be a Frida Kahlo-themed augmented reality scavenger hunt created specifically for the park, a la Pokémon Go. Kanon calls it the epitome of site-specific installation and says the event will utilize lesser explored parts of the park in an attempt to encourage exploration. Handicrafts, music, costumes, dance and any number of creatively participatory activities will be provided or permitted (just as long as it's not dangerous or illegal).

“We talk about immersive installations and immersive environments, where you walk into this space that this artist created,” Kanon says. “But with Figment it’s really about breaking down that fourth wall and creating an interactive experience from the minute you get there.”