The Best Dallas Sandwiches of 2018

Sandwich Hag
Reyna Duong, chef at Sandwich Hag, has turned this meatball morning meal into one of the best banh mi in the city.
It’s hours of crafting, and you mustn’t use machines. For Sandwich Hag owner and chef Reyna Duong, meatballs are nostalgia shaped by hand into tiny planet shapes. As a kid, she orbited around her aunts and sisters, gathering the troops for a breakfast of torn shards of baguette, cilantro sprigs, sliced jalapeño and meatballs glazed in a sharp, bright tomato sauce. Tear bread, dip into sauce and repeat.

Years later, Duong begins her family’s Bánh Mì Xiu Mai recipe at Sandwich Hag when there’s time. She’s making more of them than ever, but there must be good, old-fashioned weekend hours to devote to the sauce. Part of the joy of a good meatball is sensing the work that went into it. You should be able to imagine the raw mixture rapidly patting back and forth in between the cook’s hands to become loose planet shapes. You should taste a family history.

Sandwich Hag’s meatball sandwich is exceptional in this way. There’s tangy tomato, bright as the sun, a veneer on the warming meatballs, cooled by fresh cilantro. It’s one of Dallas’ most remarkable things to eat in the past year. The best sandwiches invoke a memory. Others are just plain fireworks. Here are a few more to celebrate:

Porchetta is sliced thin as bacon at Sachet.
Nick Rallo

Best Use of Pork: The Porchetta Sandwich at Sachet

When it’s done right, porchetta is the Sistine Chapel of the pig. It’s a Roman canvas, labored over for hours in tight quarters, primed by brine, fire blistering the skin until it knocks when you rap it with your knuckle.

Sachet’s sandwich takes a couple of days to come together. The pork belly and collar immerse in a fennel and coriander salt bath. The tenderized pork rolls tightly into a log. It chills overnight, arming the flavor inside the skin. They score the fat and roast it for hours. Once the porchetta cools, it’s sliced into thin panes. Sachet’s design is neat and clean — crisp white dishes and tidy everything — but the flavors of the porchetta are more like the fire around a food cart. It’ll remind you of Roman street food, even if you haven’t been to Rome.

Bonus: Sachet's ciabatta is bubbly, blistered on the edges and made in-house. Crackle sounds happen when you press the bread down with both hands, forever an audible sign of greatness. 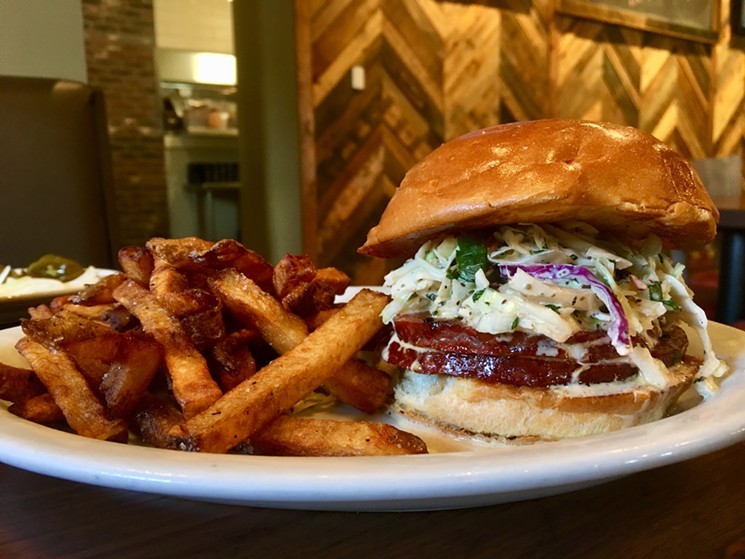 Lakewood Smokehouse knows exactly what to do with bologna. Coarse-ground pork shoulder and beef, top round, is kept icy cold until seasoning time. They carpet the grind with spices. They grind the mixture again, remix the seasoning and chill it again. The blend hangs out, curing for a day or two. It smokes for seven hours. Lakewood Smokehouse partner Andrew Golden, arbiter of the bologna, ticks the temperature up slowly to keep the fat jailed inside the casing. Two thick slices fry on the flat top. Between a soft bun, the double bologna sandwich is smoky, snapping with freshness and the rich-beefiness of a damn good hot dog. Mustard zaps the coleslaw. You want this sandwich anytime of the year, but especially now. It’s best eaten alone, free of bologna judgment, miles away from the pomp and circumstance of the holidays. 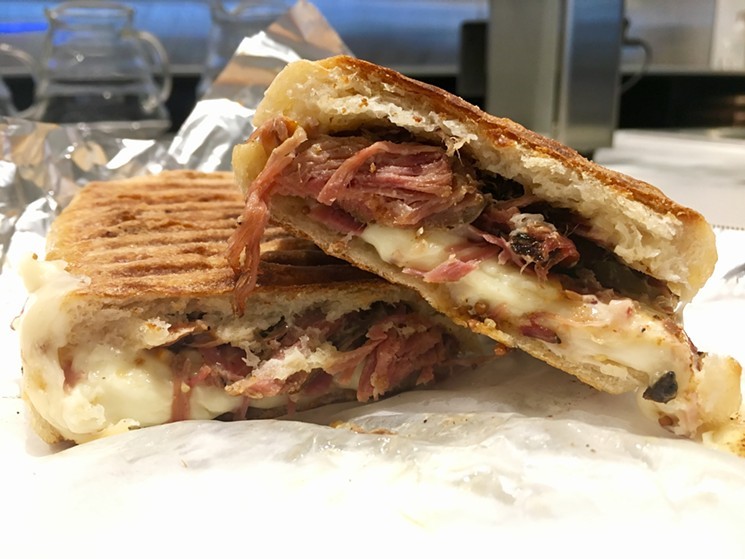 The machines at Civil Pour, Dallas’ new coffee and growler shop in the ever-changing Walnut Hill strip mall The Hill, are so expensively designed that you may miss the best thing about the joint right now: the flesh-and-blood humans who emboss your sandwich in the panini press, the trusty old machine that needs no digital readout. Order this Texas Cuban, stuffed with tender, juicy barbecue pork from Deep Ellum’s Pecan Lodge. Mustard seeds crack open against Tasso ham. Mayonnaise challenges what’s “authentic,” a richness cut by pickles sheared tissue-thin. It’s coffee-house food that puts the stale banana nut muffins and boring egg bites, sous vide for some reason, to shame.

“It takes so long to make, but it has to,” says Duong of her chef’s special, which is offered, for now, when she can take a deep breath and muster up the basic strength to make it. “It’s not a meatball until your back hurts when you’re done.”
courtesy Sandwich Hag

Sandwich Hag's chef Duong grinds the pork and mixes it with diced jicama and onion. There is lots of black pepper. The pork balls steam, juice and fat running. She adds it all to the bubbling tomato sauce. Duong reduces and stirs and waits. The perfect meatball sub is one that finds the right balance of sensations. Tender, soft and resistant meat  should be just lightly glazed sauce. The baguette crust should break like a shell, revealing chewiness inside.

Duong's meatball banh mi, offered as her chef’s special (available until she runs out — follow Sandwich Hag on social media for info), has each of these sensations. Duong doesn’t salt the sauce; she lets the pork’s fatty juices do the natural salting for her. Sprigs of cilantro are like fresh air. It’s a few ingredients, nursed for hours and cradled on bread.

“It has to cook down to a consistency that I deem is perfect. That’s why it takes so long. It’s a layering process,” she says. “It’s very fragile.” 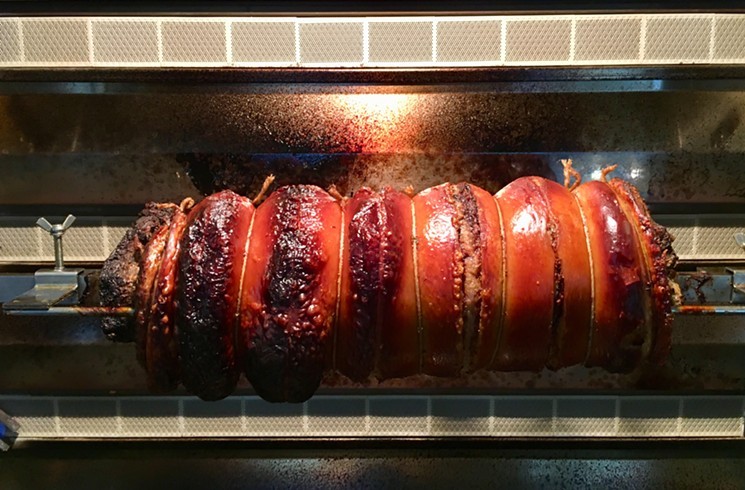 We could stare at the porchetta log for hours at Commissary.
Nick Rallo

Like a yule log, the porchetta spins in front of a gentle wall of flames at the Commissary. The skin, from hours of basking in fire, is as thickly crunchy as bark. It makes a “tap” sound when tapped with the handle of a knife. We could watch the porchetta spin for hours untouched, but we can’t: It needs to be sliced and placed on sandwich with a sunny-side-up egg, yolk sun-bright. The yolk runs down the edges when you break into the sandwich. Poppy seeds pop and break with nuttiness on the house-made bun. Salsa verde provides relief from the rich fattiness of the meat. Plan on taking the time to enjoy it; don't rush this gem.

The shaved lamb gyro is a throwback to the chef's days of eating at the Vista Ridge Mall.
David Pena

As a kid in Dallas, David Peña found himself with a gyro in one hand and the controls to a video game in the other. A mall gyro (he used to arcade at Vista Ridge as a kid), one that leaves the plastic of an arcade bizarrely greasy, stuck to the lobes of his brain. Years later, Peña has taken over the kitchen at Goodfriend in White Rock. After departing BrainDead Brewing, he’s done a gritty reboot of the menu — one that doesn’t ruin your childlike love of the old bar-patio food. He painted bacon with WhistlePig Whiskey and layered it between bread for a game-changer of a BLT made with bacon fat chipotle mayo. This isn’t like Netflix’s "Full House" reboot — this reimagining is more than welcome.

The Tex-Mex shawarma in all its glory.
Kathy Tran

There are good days and then there are the great ones, when the pomp and circumstance of a sit-down restaurant is too much to handle and all you order is a tornado of fire-charred meat in a crunchy wrap. In Irving, there’s a chicken shawarma wrap that causes visions. Shawarma fuses Tex-Mex to an already great thing, fire-licked chicken mixed with grilled onions, bell peppers, melted cheese and a Tex-Mex-inspired sauce. It’s the size of a firelog, and it’s less than $7.

The peanut butter and bacon burger: A quarter-pound of Nebraska chuck beef topped with Jif, the creamy stuff, with hot pepper jam on a soft brioche bun for $6.59.
Nick Rallo

“It’s one of those things that sounds like it could work," a customer says at the Off-Site Kitchen counter. Onions sleep in Worcestershire sauce until they’re good and sweet. Jalapeño pepper jam is a glassy amber beneath the griddle-encrusted chuck patty. A slice of unmelted yellow American hangs above the patty, and there’s a couple of planks of crispy bacon. The peanut butter, smoothed by the heat, finds those charred, fire-sparkled beef juices. It’s part of Off-Site’s refreshed, new-ish menu from General Manager Jon Aisner.

They use the Jif creamy blend. The thick saltiness of peanuts finds a swipe of jalapeño jam. It’s a nudge of heat, just enough to light up your mind in the way a new flavor profile can turn on the electricity.