Dallas' Minority Students Have Fewer Opportunities to Succeed Than Whites, According to Data

Black and Hispanic students in Dallas public schools are more likely to get harsher discipline, lower grades and fewer opportunities than their white peers, according to a report from ProPublica.

The report, which uses numbers mostly taken from data reported by schools to the U.S. Department of Education, shows that Texas’ history of segregation in education is still having an effect on students of color in the district.

DISD is trying to tackle the problem head-on.

“The biggest thing from the work that we’re doing on racial disparities, I think, is the racial equity resolution that we put in place which basically called out historical inequities, the role that Dallas ISD played in exacerbating those inequities and a charge to move forward to begin to directly address some of the largest inequities that exist within the school system,” says Miguel Solis, District 8 school board member for DISD. “On top of that, we created a racial equity department that draws some of its charge from the racial equity policy.”

The new policy on racial equity was adopted this summer and details steps the district is taking in creating guidelines to close inequity gaps related to race and socioeconomic status, in compliance with the Education Equity Resolution that was passed by the board of trustees in 2017.


In April, DISD also opened the Racial Equity Office to help implement its plans. According to the director of that office, Jamila Thomas, the new department is taking direction from the racial equity policy and is putting together a plan to close the academic achievement gap for minority students.

Thomas said some of their projects include creating a curriculum that teaches African, Latin, Asian and Native American history as well as a pilot survey of eighth- and 10th-graders across 18 schools in order to give the students a seat at the table.

“DISD is really moving towards a progressive model of dealing with these issues,” said Thomas, who was a student in the district. “This is just a little bit of all the things we’re working on right now."

Academics aren’t the only racial inequity problem that DISD is trying to tackle. Solis helped pass a policy last year that would ban out-of-school suspensions for kids in prekindergarten to second grade and would make it a last resort for students between third and fifth grades after reports came out showing minority students are more likely to be suspended than whites. He said he is already seeing change.

“We put new social and emotional learning standards in place to make sure that when kids get in trouble, we are working with them outside of the classroom." – DISD trustee Miguel Solis


“We put new social and emotional learning standards in place to make sure that when kids get in trouble, we are working with them outside of the classroom to make sure we’re rehabilitating their character [and] their mindset that may have been leading to the specific action that lead to the misbehavior, and that’s making a big impact,” he said. “We’re doing things like restorative practices and restorative justice to work with the kids, as well.”

Although Dallas shows some of the largest racial disparities in education in the area, the school districts surrounding DISD aren’t exactly innocent.

It’s a problem all over the DFW area, as the maps below demonstrate.

A screenshot from a map put together by ProPublica demonstrates how racial disparities affect black education in DFW.
ProPublica 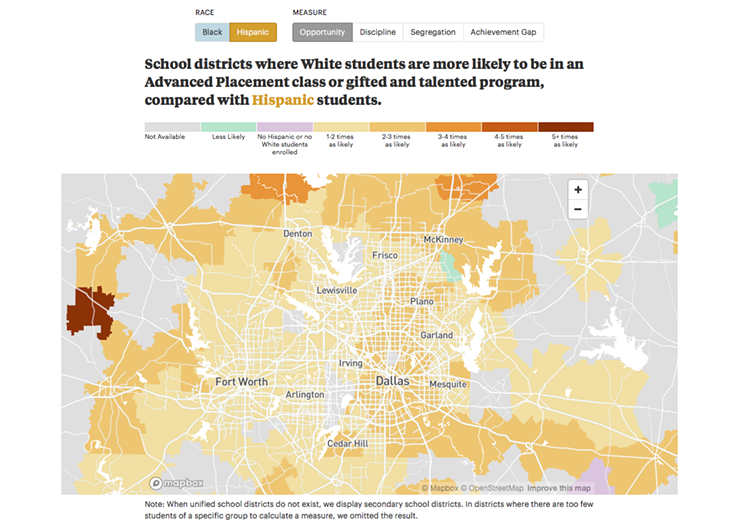 A screenshot from a map put together by ProPublica demonstrates how racial disparities affect Hispanic education in DFW.
ProPublica

But Thomas and Solis have hope for a better future.

“By unveiling some of the historical inequities and being open and honest about what we intend to do moving forward, we will ultimately be able to recon with a history and a set of astounding moral debts that are impacting kids in our schools today,” Solis said. “I think that it will take a continued support from both the school board and the administration to ensure that the policy continues to evolve and that the investment is made within the racial equity department so they can continue to move this work forward.”