In Some Circumstances, Should Cops Show Less Restraint, Shoot Sooner? 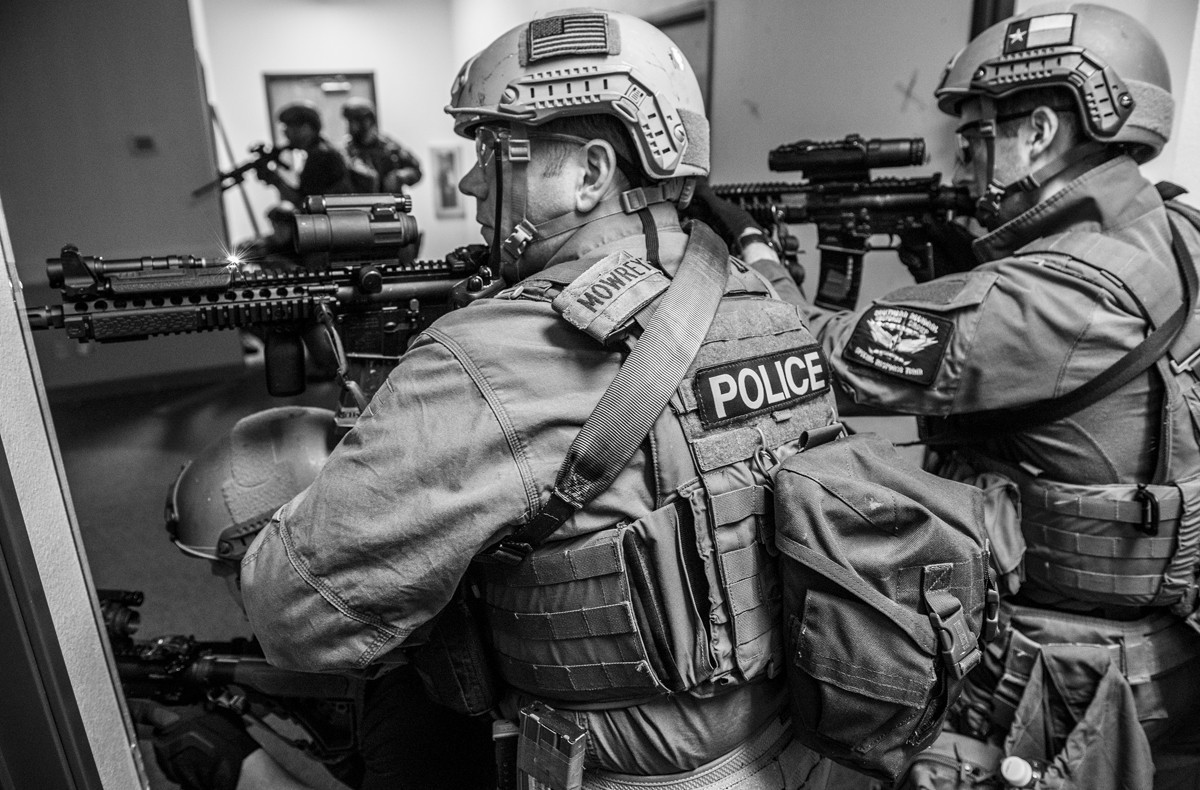 Danny Fulgencio
Police in a training exercise
In the Tuesday morning television coverage of the four Houston police officers who were shot the night before, the most heartbreaking and infuriating words came from Joe Gamaldi, president of the Houston Police Officers Union.

We all need to take just a minute and think about what happened Monday night. The Houston police chief said at a press conference, “Immediately upon breaching the door, the officers came under fire from one or two suspects inside the house.”


“We are sick and tired of having targets on our back."— Houston Police Officers Union president Joe Gamaldi

But a more detailed picture from police indicated that the gunfire from inside the house was not precisely immediate. Police said the person who opened the door disappeared into the house at first, then came back with another or other persons, all shooting.

So isn’t the issue whether the police should have started shooting sooner — the instant the person at the door failed to surrender? Except by shooting first, was there any other viable way for police to raid a place like this and not wind up with four cops shot, two in the neck and in critical condition?

Let’s figure out the procedure. First let’s take it from the perspective of the people in the house. I hear loud banging on the door. The door flies open. I see a bunch of cops outside in armored tactical gear pointing firearms at me. What do I do?

One: My arms fly up involuntarily, I shout something like, “Don’t shoot me,” and I fall to my knees. In other words, every syllable of my body language says total surrender.

Two: I turn away and go back into the house.

Why? What does that reaction mean? Under that level of threat, failing to surrender immediately is not a normal reaction. Could it mean the person behind the door is senile, deaf, otherwise impaired? Sure. Maybe.

But it’s way more likely to mean that the people behind the door are jacked on amphetamines and will come back to the door and the windows with semiautomatic tactical rifles to indulge their long-awaited fantasy of shooting at cops.

Now let’s look at it from the other side of the door. What are the cops supposed to do when the person inside the door fails to surrender and instead disappears into the gloom? One: fill the house with lead. Pump enough ammo in there to chop the place down.

Two: Wait a beat. What if the person was just going back inside to get his hat? Shouldn’t the police show restraint before they fire?

Remember that this was not a random raid on a random address. According to subsequent statements from Houston police, the raid was based on information developed over time by undercover narcotics officers. So when they raided, the Houston police knew they were raiding a drug house.

In raiding a known drug house where inhabitants should be assumed to be armed, should the police have hesitated at the door before firing, after the person who first appeared in the doorway failed to immediately surrender? Let’s imagine that we say yes. We want the police to show restraint under all circumstances before shooting at citizens.

Now let’s go back to the top, and you tell me how the cops could raid that place and not get shot. The cops hesitate before shooting. They show restraint. How do they not get shot themselves when the people inside come back to the door with weapons?

We should consider the alternate possibility that I mentioned above — filling the house with lead. What if they do that and it turns out they were wrong? The drug dealers were gone getting groceries. The person at the door was their granny, who was confused. Are the cops now killers?

How much restraint can cops exercise and not get shot?
Danny Fulgencio
Somewhere in all of this, I always wind up feeling there must be some kind of abject, even deliberate inattention to the social context in which these terrible things occur. We as a society fail to resolve the social crisis of drug addiction. Because we can’t get the drug trade up out of the gutter and put it into a rational intentional framework, we cede that entire volatile ground to the very worst ruthless criminal element. Next, we flood the streets with guns. And then we call the cops.


“Immediately upon breaching the door, the officers came under fire from one or two suspects inside the house.”— Houston Police Chief Art Acevedo

We don’t want the cops to get shot in the neck, right? We don’t think this is some professional sport like hockey, with strict rules for offsides and high-sticking. We know that with guns on both sides, there is only one rule: shoot first or be shot. So knowing all that, I would assume we’re going to give the cops a great big benefit of the doubt here, a margin of allowable error.

Hate to say it, but granny can get shot. Don’t want granny to get shot. But if we don’t want the cops to get shot, then this is how we would have to look at it: Putting your granny inside your drug house is not at all the right thing to do with your grandmother.

If she does get shot, you were the killer. You put her there. You made it happen, not the cops at the door. You killed her. It was murder by cop, but you are the murderer, not the cop who shot her.

The cops have nothing to do with creating the social context. We do that. We shape the society with our votes (or in many cases our nonvotes). The social reality we create is handed to the police on a platter. Here you go: vicious drug trade, moral mayhem, guns all over the place. Now you go deal with it for us.

In that context, the challenge left to police is more logistical than moral or political. How do they get into that house and not get shot? They have one brief moment, a snap of the finger when surprise is still on their side, before the shock fades and the people inside have time to grab guns and shoot back.

In that same blink of an eye, the person at the door has his or her one chance to survive through immediate surrender. If the cops hesitate beyond that moment, they get shot. So we should not only understand why the cops must fill the house with bullets at that moment, we should insist that they do so. It’s the only realistic way they can survive.

We don’t want dirtbags to take their lives when all they're trying to do is protect the community and protect our families. We’re on the cops' side. Right?