The big-screen TVs over the bar are showing the Celtics game, a college basketball matchup and SportsCenter. I’m sipping a draft pour of Dos Equis from a mug. Live music starts at 8:30 p.m., and a DJ may come in later. As I tuck into my bar snack — a thrillingly spicy hot-pepper-sauce-coated, deep-fried dumpling full of ground chicken, chives and cilantro — I can’t help thinking that a Nepali sports bar is exactly what Irving needed. 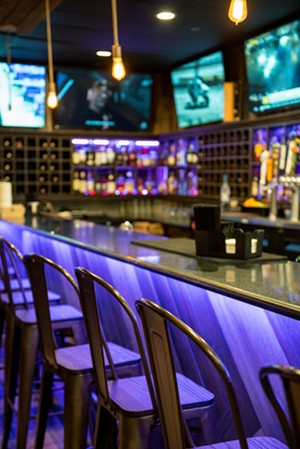 The bar at Peak Restaurant
Alison McLean
Irving is an unusual Dallas suburb for a number of reasons. Real estate website Trulia once declared an Irving ZIP code the most diverse neighborhood in the United States. This is also one of the drier parts of DFW. There are no liquor stores, and there are no pure, food-free bars. Irving’s watering holes are predominantly the “bar and grill” type, many of them national chains; ask Google Maps to recommend a bar in Irving and it will unironically suggest Hooters.

All of which makes Peak Restaurant an even more remarkable place. Peak, which opened on Belt Line Road last July, is a sports bar in a suburb with precious few places to drink. It’s also a proudly Nepali-Tibetan kitchen with stellar traditional food and staff so welcoming that there may be no better place in Texas for first-timers to try Himalayan dishes like momos, badel sadeko and a Thakali thali.


“We were the first sports bar with Nepali and Indian food in Irving that I know of.” – Bipin Thakali

And Peak offers not-so-traditional choices too. Who’s ready for a round of mango lassi vodka shots?

“We were the first sports bar with Nepali and Indian food in Irving that I know of,” says Bipin Thakali, one of Peak’s owners. Thakali partnered on the new bar with Manoj Raj, longtime owner of Everest, which might be the oldest and most well-known of the Himalayan restaurants in the Dallas area. Their head chef, Abhishek Rai, makes everything in house, even the dough that wraps his dumplings. Peak's chili momo, with steamed momo (in the background)
Alison McLean
Like all Nepali restaurants, Peak Restaurant serves its fair share of momos, the iconic national dumpling that comes in a variety of shapes and preparations. One of Peak’s specialties is huge steamed beef momos ($9 for eight) — a rarity, since much of Nepal’s population is Hindu. (Co-owner Thakali comes from a small ethnic minority, also named Thakali, with a more complex religious heritage.)

The beef momos are enormous and fantastic. They come with a bowl of broth for dipping, plus two additional sauces, one a blend of tomato, turmeric and other spices, the other straightforwardly spicy. I took great joy in dunking my entire dumpling in broth, pulling it up from the depths, dabbing it with sauce and savoring the flavors, the texture of the thin homemade wrapper and the spice blend of the beef filling itself. A plate of momos by itself isn’t a balanced meal, which is too bad, because sharing them requires superhuman generosity.

Almost every Nepali menu advertises the somewhat cryptic “C. Momo.” The C stands for chili — as in a hot red pepper sauce in which the dumplings are slathered after they’ve been fried. Peak’s chicken chili momo ($8 for 10) are unusually flavorful, with superb chicken-and-herb filling. They’re also a bit of a gamble: Most of the dumplings are quite spicy, but occasionally an extra bite of hot pepper turns one momo into a real flamethrower. Peak’s chili momos are perfectly round with twisted pleats on top that stiffen after they’re fried. For that reason, they’re better as microwaved leftovers the next day. Peak's masala papad
Alison McLean
One of the restaurant’s best-selling bar snacks, badel sadeko ($8), will win over many a first-timer. Slices of pork belly are mixed up in a moderately spicy red pepper sauce, fried until crisp and tossed with white onions and long, diagonal slivers of scallions. The pork is thin and salty, like spicy potato chips made from meat.

We needed a respite from the heat after the chili momos and badel sadeko, so we opted for a simple masala curry featuring mushrooms and peas ($12). It’s a superbly executed curry served in a small pot, and begs for some of the restaurant’s rather ordinary naan ($2) to sop it up.

There’s a more interesting, more region-specific vegetarian option. Many cultures from the Indian subcontinent serve a thali, a wide, round tray full of small cups of different curries, chutneys and vegetable dishes, typically centered on a mound of rice. Peak has its own selection of thali — vegetarian or with chicken, fish or mutton — based on the culinary traditions of the Thakali people, who come from Nepal’s mountainous north.

Thakali the co-owner, referring to Thakali the culture, explains that the differences in the food come down to spices, including an herb called jimbu, which is used to flavor the thali’s stew of black lentils. It’s also common for Thakali food to employ timur, the same tongue-tingling peppercorn better known for its use in Sichuan cooking. The petite, flavorful black lentils are my favorite part of Peak’s Thakali thali; they are tender, but they don’t turn mushy. My enormous vegetarian tray ($11) also came with a mild, comforting curry of the day — potatoes, green beans and chickpeas — and several selections of pickles, plus a bowl of yogurt and a greasy but addicting pappadum.

Peak has more plans in the works. The restaurant will debut lunch service in a few weeks, and after that — seven months after they began serving the public — they’ll finally throw a grand opening party and start their first marketing campaign. Thakali says that when cricket tournaments start, he may add that sport to the all-American lineup featured on the bar’s big TVs.

Peak's chicken chop suey
Alison McLean
Someday soon, they may even rewrite the menu, which lists the names of Nepali foods without any descriptions. With little help from the menu, the Irving natives who pour into Peak on game nights order food by asking for recommendations from Peak’s exceptionally friendly servers. Chatty, welcoming and happy to talk about favorite foods, the entire staff makes first-time guests feel instantly at home.

On my most recent visit, there was one more thing I had to try: the mango lassi shot ($6). Laced with vodka, it tastes exactly the way it sounds. I’ll be returning to Peak for the food, but if somebody suggests a round of shots, I won’t say no.