Dalila Thomas
Daddy Mac’s Double-D sandwich basket
Budget Bites is a series that looks for the best food and drink deals at restaurants in DFW. Because being on a budget doesn't mean you can't eat out in a city like Dallas. 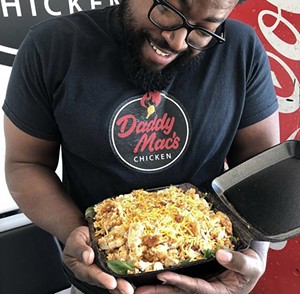 According to his mom, the Daddy Mac’s Chicken owner has been a fan since he was in the womb, so it made sense when McMillian opened his own fried chicken spot. And after being in the game since August 2017, customers are finding more and more to like about this chicken shack, from the restaurant's humorous Instagram to kitschy dish names to the food itself, which led us to name it one of the best black-owned restaurants in Dallas last year.

One of the main attractions is the Double-D Sandwich Basket ($6.99), with two large chicken strips, pickles, a side of "mac" sauce and fries. If you want to kick things up a notch, ask for the spicy seasoning.

Daddy Mac’s Sugar Daddy Wings are glazed with honey-maple and dusted with powdered sugar.
Deah Mitchell
Daddy Mac’s also offers the Sugar Daddy, fried chicken wings topped with honey-maple glaze and powdered sugar. And if that doesn’t satisfy your sweet tooth, Mama’s Banana Pudding — made by McMillian's mother — will take you where you need to go!