Hillside Tavern Opens In Lakewood With the Dreamiest Patty Melt 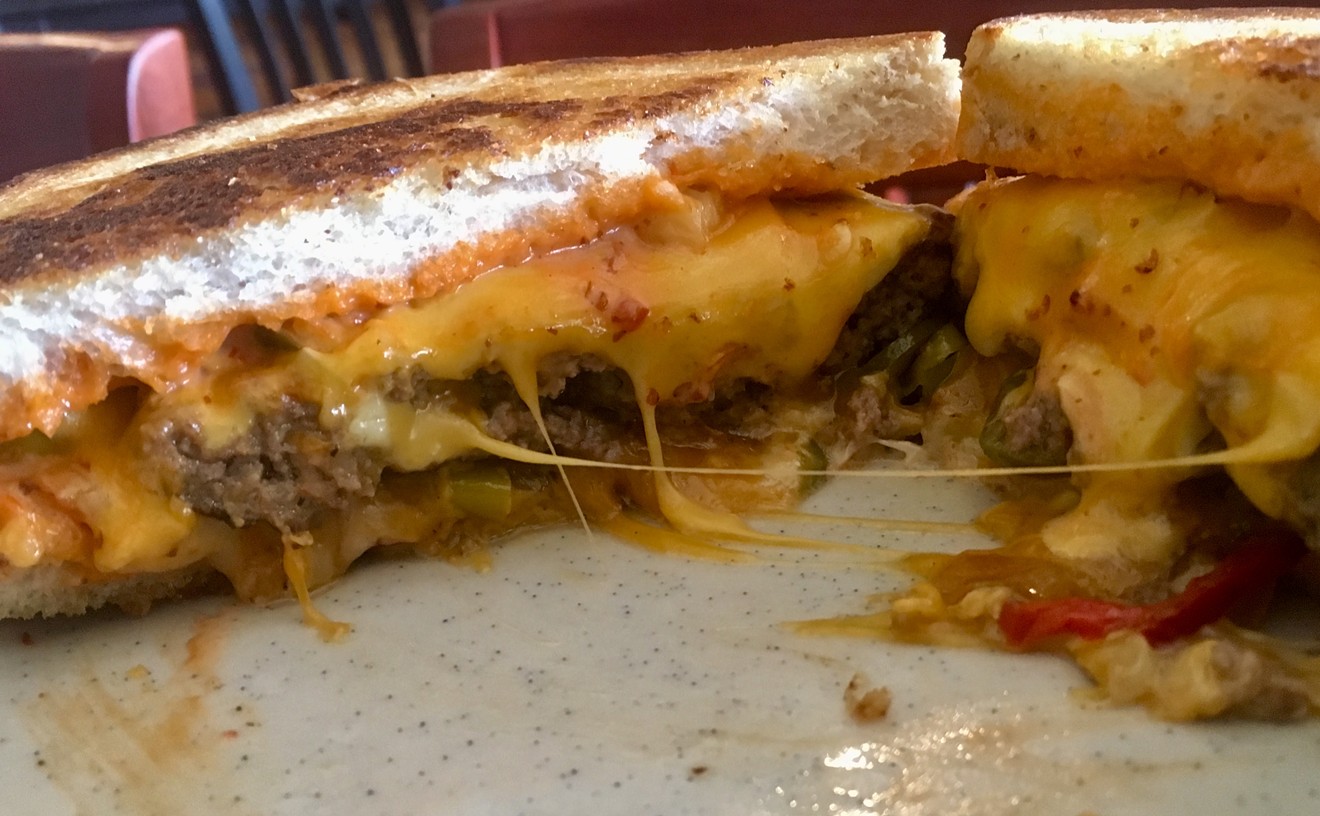 Nick Rallo
The four cheese patty melt at Hillside Tavern is served on toasty sourdough for $10. No more, no less.
The sensations are familiar. At a tall seat near the bar, the kind where you could swing your feet and they wouldn’t touch the ground, pre-summer heat roils the air conditioning of the room. Eddie Vedder’s voice does the same thing — his low grumble rolls around the speakers with “Daughter,” and one of the servers sings along with the verse. So, yes, this new Dallas tavern is designed floor-to-ceiling with Texas decor and good lightbulbs and plenty of hardwoods.

Then, the plate drops looking like it was pulled from the back of grandma’s pantry: It’s white flecked with blue and a blue rim. The only thing on the plate is the sandwich, and it's not plated with any trumpet-announced fanfare. It's the little diner things that keep us going.

Patty melts are an end-to-end perfect food. The classic melts have caramelized onions and white or unearthly- yellow cheese beneath crusty rye bread. They’re rich and salty. The pitch-perfect patty melts harness acid like a rider on a bucking bull. These perfect sandwiches are a complete meal with all the flavors of sweetened heat, pickled and numbing, mustard brightness and a slowly erupting flow of cheese bookended by toast. That’s what Hillside Tavern’s patty melt showcases.

It is, without a doubt, the dreamiest, most sensational patty melt in East Dallas right now. It’s rich and overflowing, zapping with pickled heat from cherry peppers and pepperoncinis. Chef Nathan Tate, who also helms the menus at Boulevardier and Rapscallion, walks out of the kitchen with a cool, calm expression, hat snug on his head.

Perfection, thy name is patty melt.
Nick Rallo
“We initially started with the classic ingredients, but I’m huge on acid,” he says.

He spreads French’s yellow mustard over the beef patty before smashing it into the flat top. Onions simmer on the griddle with cherry peppers, as bright red as a Valentine’s Day card. The “secret sauce” is also as red and molten looking, amped with Sambal chili sauce and creole mustard. They toss in some of their barbecue rub too. The ending secret sauce is creamy, hot and crackling with mustard and pepper seeds. It’s good.

“I just like ’em,” Tate shrugs, after being asked about his patty melt’s origin story. “We wanted to hit a price point so that we can sell a cheap burger.”

Despite the sauce’s coddling, this is no fancy patty melt. It doesn’t feature beef from grass-fed cows who get drunk on wine and lounge in a hot tub on a cozy farm. That's for another burger joint, it looks like. Hillside Tavern's burger is just sizzled ground beef, resting in between the blanket of American, provolone, cheddar and jack cheeses. It’s 10 bucks on grandma’s plate. At least that’s what it feels like.