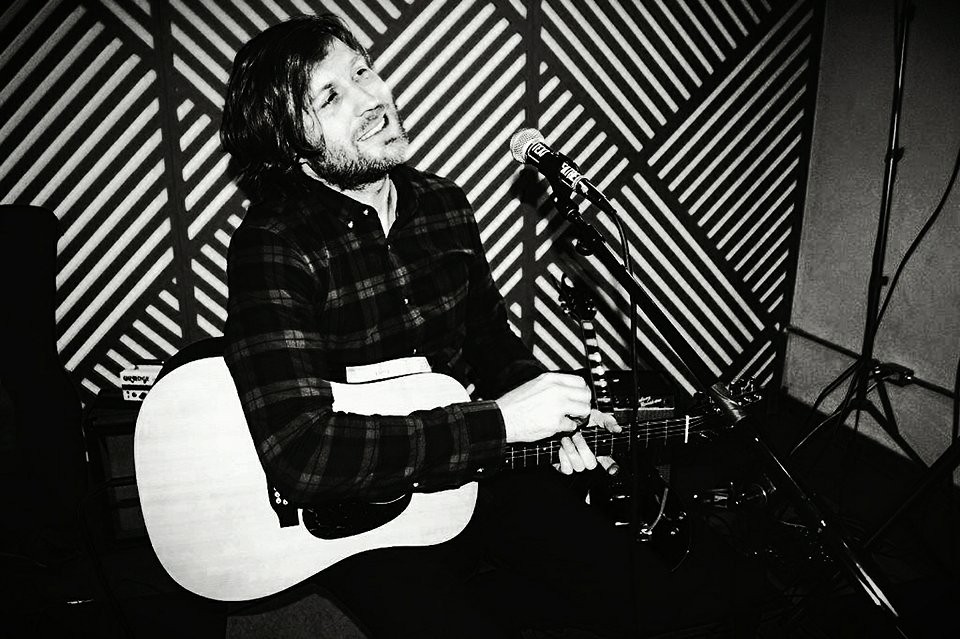 Lucero Rodriguez
Singer Andrew Moss waiting for his video to debut for the song "Mr. Monocle."

Today, the band is releasing its first video for the song, “Mr. Monocle,” one of the album’s most introspective moments.

A kind of recapitulation of Lacan’s Mirror Stage — where one must grapple with the fact that we do not feel whole even when the mirror presents us as a complete being — the song presents us with the image of a person pleading with the mirror, “Revive me in your ways.”

Directed by Andrew Sherman of Drewlio Photo, the video presents us with the bleak image of singer Andrew Moss sitting half-lit in an otherwise pitch-black room holding his guitar. As the video goes on, we see Moss' character reading through a scroll, staring into a mirror and interacting with a black bust of Caesar.

“When storyboarding the ideas for the ‘Mr. Monocle’ video,” Moss says, “I kept going back to the origins of the song.”

“Manifesting through the Aeolian mode, chords take on a bleak journey near oblivion. When the lyrics arrive in verse one, they immediately reference the pitfalls of vanity and arrogance each of us is capable of possessing.”

Moss also explains that as Sherman studied the visual concepts of the outline, he decided that he wanted to go for something simple and dimly lit in order to allow the story to ooze through without the usual distractions that go along with effect-heavy videos.

“We knew we wanted something that was honest and cryptically revealing to those who pay attention,” Moss says. “This song and video explore the true nature of why we want others to be impressed with the way we look.”

As evidence of this sentiment, Moss points to the lyrics of the chorus: “guard your heart from this, let the seasons pass you over ... the mirage that you’ve created takes you closer.”

“It serves as a caution to those who seek to impress others with worldly things,” Moss adds, “even if that thing is a monocle.”

For fans looking to find the deeper meaning in things, there is plenty else to find in the video’s list of small things.

Whether it be reading a scroll, staring into a mirror, ringing a bell or, of course, wearing a monocle, there is plenty to look for and guess at in this video.

“This song and video explore the true nature of why we want others to be impressed with the way we look.” — Andrew Moss

Moss also says that some of the symbolism in the video may have been added subconsciously, particularly when it comes to his interaction with the bust of Caesar, placing a monocle on the bust before ultimately wearing it himself.

“I just thought it would be cool to look over to a mighty face,” Moss says. However, when asked about the symbolic contrast between Moss’s face and the face of a powerful emperor, Moss reflects upon the fact that “maybe he was everything and I’m the opposite, and he still didn’t make it.”

Fans of the video and song can find Great Heart’s The Sunrise Machine EP digitally on the band’s Bandcamp page. Watch the video for "Mr. Monocle" below: