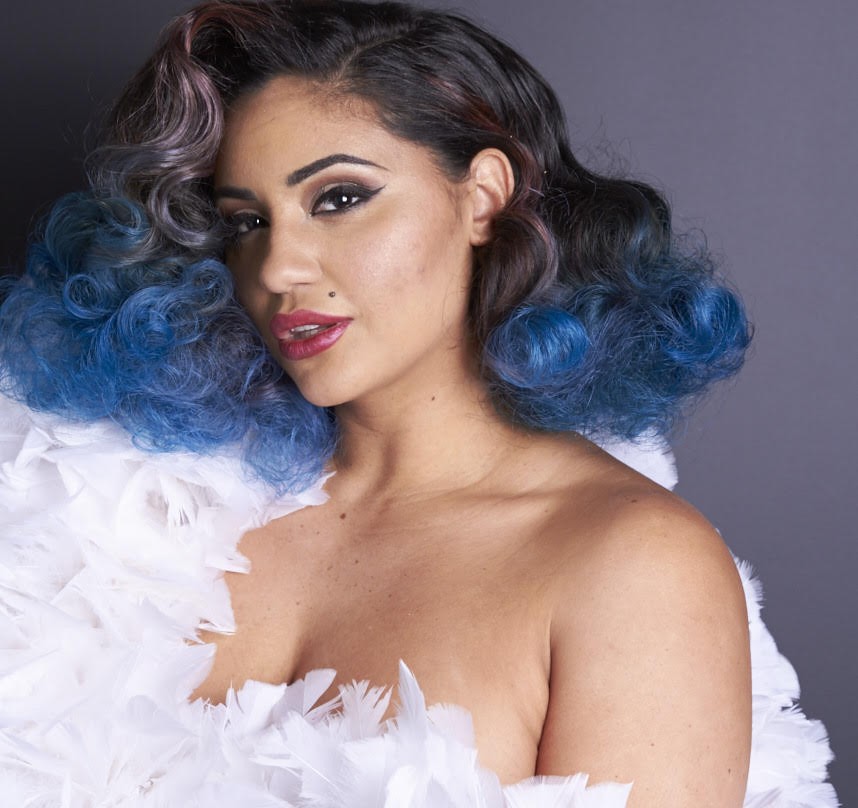 Crissy Brookshire
Iris Le'Mour, a jazz singer, decided to incorporate live singing into her burlesque act, rather than navigate the music industry's sexism.
Let it be known that Iris Le’Mour shines. On an intensely sunny Sunday afternoon at Deep Ellum’s colorful vegan café Tiki Loco, she lights up the space beyond the daylight glow.

Le’Mour speaks on her signature burlesque acts, and the tagline for one of them as she enters the stage, which is "Serving you something hot, brown and full-bodied."

“I wanted to make something that was like brown woman in a brown liquid that everybody would want – coffee,” Le'Mour says. Onstage she allures crowds in an ombré brown ball gown with a looming giant coffee cup as an essential prop that simply reads “Iris.” Almost every act of Le’Mour’s is accompanied by a jazz song of her choice, performed by women of color.

“When I was growing up, one of things that people used to call me was a café con leche girl,” Le’Mour recalls. She mentions that women of color are often labeled in line with what’s in your morning pick-me-up: as "black, caramel, mocha, etc."

“I wanted to make this act for all of the coffee-colored girls in the world,” she says.

She picks up her vegan taco and talks about her career. Le’Mour has been in Dallas for 15 years, performing burlesque for 10 of them. She started as a pin-up model when someone approached her asking if she did burlesque. She didn’t, but she began to fake it until she made it — or won it.

“I ended up actually winning a competition for my debut,” Le'Mour says. She has since competed, performed and made fans on countless stages. In 2013 she won the Italy Queen of Burlesque title and competed in the Burlesque Hall of Fame for Best Solo Act, where she was one of over 600 applicants and 10 performers. “It was the pinnacle of my burlesque career,” she beams.

Not only does Le’Mour woo her audience with burlesque, but she also sings.

“I actually just got back from Minneapolis where I sang 'I Just Want To Make Love To You' by Etta James, wearing a really beautiful 1930s dressing gown with red lingerie,” she says. Le'Mour has been singing her whole life, but only started to work her musical chops into her acts in the last four or five years. And, as she notes, it’s not common for a burlesque performer to sing.

“Typically you’ll do one or the other — not both, ” she says.

"As a young woman trying to do music, there’s a lot of people trying to take advantage of you, and I wasn’t trying to play that game.” — Iris Le'Mour

Le’Mour had grown up singing in choirs and even tried working with some recording artists but didn't find it hospitable to women.

“The music industry is very sexist," she says. "As a young woman trying to do music, there’s a lot of people trying to take advantage of you, and I wasn’t trying to play that game.”

On the contrary, Le'Mour found that the burlesque industry is commonly run by women, creating a safer and more encouraging place for Le’Mour to dazzle audiences.

While she has sung, burlesqued and charmed the souls of audiences all over the country, Le'Mour's favorite role, and primary focus, is being a champion to women of color and of every body type.

“Women would approach me after (a show) and say that me performing made them feel good about themselves,” she says. “I put my body type in such a positive light and that made them feel better about their body type.”

For her next act, Le'Mour has a gender-neutral swimwear line debuting in July, called Juno Apparel.

Beyond tassels and acts, possibly one of the most enchanting things about Le'Mour is her preoccupation with energy and intention.

“I have to be very careful about what I think and what I say, because I’m really good at making those things happen,” she shares, while casually mentioning manifesting her thoughts into reality.

“I think everybody has little tiny super powers,” Le'Mour says. “This just might be one of mine.”

Iris, in Greek mythology, personifies the rainbow, which is a fitting description for Le'Mour's colorful presence. As an onstage character, and even off, she radiates an air of strength and unapologetic seduction — all while standing up for women.