DFW cities and suburbs are booming, according to numbers released Thursday by the U.S. Census Bureau. Three of the 15 fastest-growing large cities — defined by the bureau as having populations of more than 50,000 — are in North Texas, as is the city with the third-highest numeric population growth. Two North Texas cities are among the 13 biggest in the country, as well.

Fort Worth experienced the largest population growth in the region. According to the Census Bureau, 19,522 people moved to Cowtown between July 1, 2017, and July 1, 2018, a figure topped only by Phoenix and San Antonio. Fort Worth's total population is 895,008, bumping it up two spots from 15th to 13th. 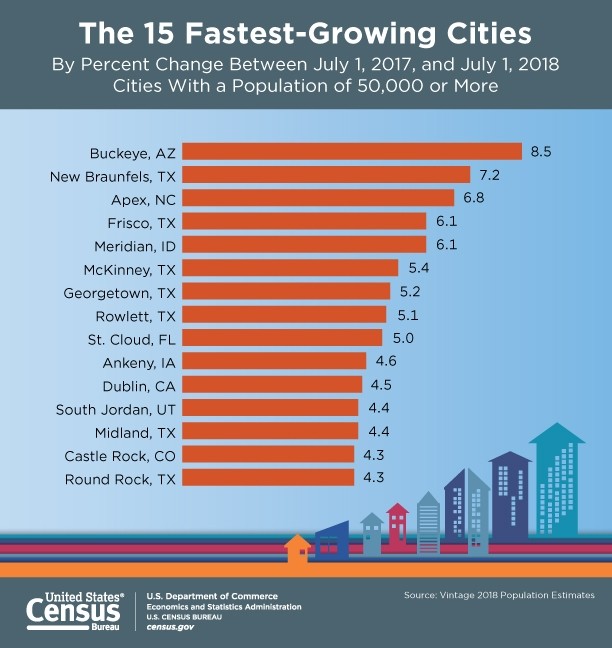 Seven of the 15 fastest-growing cities in the U.S. are in Texas.
U.S. Census Bureau


Dallas remains the ninth-largest city in the country, with 1,345,047 residents.

While Dallas and Fort Worth remain the biggest population centers in what remains, according to Census data released earlier this year, the United States' fourth-largest metropolitan area, the cities' suburbs are experiencing tremendous growth.

In the year covered by the data, Frisco grew by more than 6% and is now home to 188,170 residents. McKinney and Rowlett both grew at a similar pace, coming in at Nos. 6 and 8 on the Census Bureau's fastest-growing list.