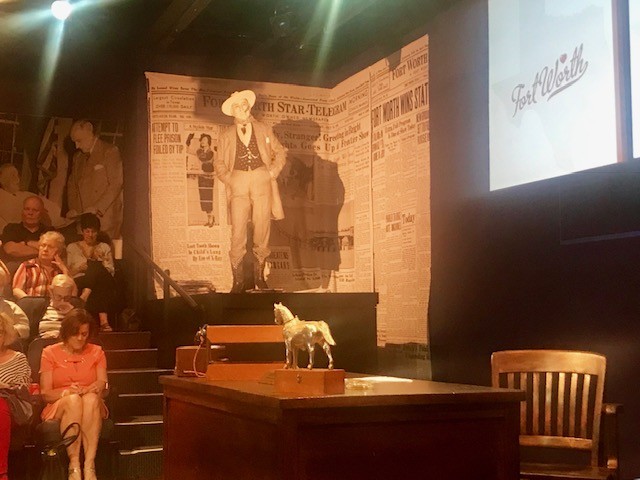 “It was because of Watergate,” he says. “When Watergate happened, I realized that I wanted to be, like, a columnist and an investigative reporter.”

New York also scared him off. It was crowded, intense and expensive, Lieber says. So he left, made a few stops along the way and eventually settled in Texas.

“The main thing that happened is I could see the big sky,” Lieber says of the state's appeal.

The greenhorn Southerner soon landed a job with the Fort Worth Star-Telegram, where he worked for two decades.

“I was this liberal, divorced, democratic, New York City jew,” Lieber says of his early days at the publication, “and they constantly reminded me of that,” he says of Texans, clarifying: "conservative Republican, Baptist, married, native Texans."

Lieber, 61, talked about what it was like to have “serial harassers.” A heckler once yelled for a crowd to not listen to him because he was from New York. Another time, he was invited to dinner and informed by a host that he was going to hell because of his beliefs, all before the main course had been served.

Lieber got used to the ragging after a while, he says, and he loves Texas and Fort Worth, much like media tycoon Amon G. Carter Sr., whom he wrote about in his first play, Amon! the Ultimate Texan.

Lieber calls his theatrical work "a love letter to Fort Worth.” The play is based on Lieber's eighth book, by the same name. The story combs through the life of the Fort Worth Star-Telegram publisher. It had its world premiere earlier this month at Artisan Center Theater in Hurst. Originally slated for eight performances, the number of shows more than doubled and nearly all sold out.

With newsprint plastered on the theater’s walls and a “magical” cowboy hat in hand, actor Kelvin Dilks took audience members on an animated, funny and sometimes emotional ride through time for a look into Carter’s life and at some of the events that made his newspaper’s headlines.


“I was this liberal, divorced, democratic, New York City jew, and they constantly reminded me of that.” — Dave Lieber

Dilks engaged audience members, asking whether they were from Fort Worth or Dallas. His lighthearted teasing brought lots of laughter, especially when in full Fort Worth promotion mode. The actor portrayed Carter’s character with such fervor that his words rang out like gospel.

While plans are subject to change, Lieber hopes the performance will be shown in other theaters and to members of the Fort Worth Club, where Carter was long-standing president.

“The goal is to show it to all the students in Tarrant County,” Lieber says, and a new, juvenile version would be written in addition to the adult version. Lieber also aspires to write a musical comedy with his wife of 24 years, Karen.

Although Lieber has enjoyed the play’s success, he says he hasn’t had time to revel in it.

“I’m just trying to write two columns a week plus go to every show so I can try to autograph the books that people buy,” he says. “I’m fairly lucky if I can get any sleep. It’s been a very, very busy period. And it’s been wonderful. But there’s been no time to celebrate. That’s for sure.”

At the beginning of the performance, Lieber mentioned that Carter might be mad that he just celebrated his sixth anniversary at The Dallas Morning News. On one of the days Lieber delivered the joke, audience members clapped, and another time they booed.

“It’s funny, but it’s also really sad because (Carter) nurtured the rivalry between the two towns for, you know, decades and decades,” Lieber says. “And they fought over everything. That whole bitterness, presented in even a comic way, is really kind of stunning to me.”

Nonetheless, the script, directed by Connie Sanchez, isn’t about what Lieber thinks of Carter, he says, but about “the audience, who they are, where they live, and the culture of the area.”

“The stories were so powerful that one person could carry it off,” Lieber says of the one-man play. “(Dilks) really has brought this guy to life. The laughter alone is worth it.”