8 Times Pastor Robert Jeffress Was a Stooge for Donald Trump

First Baptist Dallas Pastor Robert Jeffress took to the airwaves Friday to make one thing clear: He and the rest of President Donald Trump's evangelical backers aren't being used by the president.

“I agree 100 percent that no pastor should be a stooge for a political party or for a government leader. I agree 100 percent with that, but I don’t know anyone on the current team that is," Jeffress said in response to comments from J.D. Greear, president of the Southern Baptist Convention. "If he is insinuating and I think he is that those of us evangelical leaders who support Trump are somehow being co-opted by him, that is absolutely not the case at all.”


1. "Make America Great Again" the hymn. When the time came for 2017's Celebrate Freedom Rally in Washington D.C., President Trump called on Jeffress and the First Baptist choir to help fill out the program. When it performed on July 1, the choir was ready, serenading the crowd with a specially composed hymn titled "Make America Great Again." Nothing says not being co-opted like writing a hymn around dear leader's campaign slogan.

2. Jeffress assures the doubters that Trump actually understands what he's talking about on the campaign trail. In October 2015, as many Americans were still struggling to get their heads around Trump's candidacy, Jeffress touted Trump's acuity after the then-candidate met with evangelical leaders in New York.

"I tell ya, anybody that was in that meeting would've left there, first of all, impressed by his great charisma, by his grasp of the issues, but also the fact that he's in it to win it," Jeffress eagerly told Fox News the night after the meeting.

3. Jeffress was stooging for Trump from the very beginning. In September 2015, Trump came to Dallas for the first time, holding a rally at the American Airlines Center. Jeffress was the opening act. He was a good one, too, even managing to work "Make America Great Again" into his invocation.

5. Trump calls NFL players exercising their First Amendment rights "sons of bitches," Jeffress says they're lucky they aren't in North Korea. "These players ought to be thanking God that they live in a country where they're not only free to earn millions of dollars every year, but they're also free from the worry of being shot in the head for taking the knee like they would be in North Korea," the pastor told Fox & Friends host Ainsley Earhardt. "And I think tens of millions of Americans agree with President Trump when he says they ought to be called out for this." 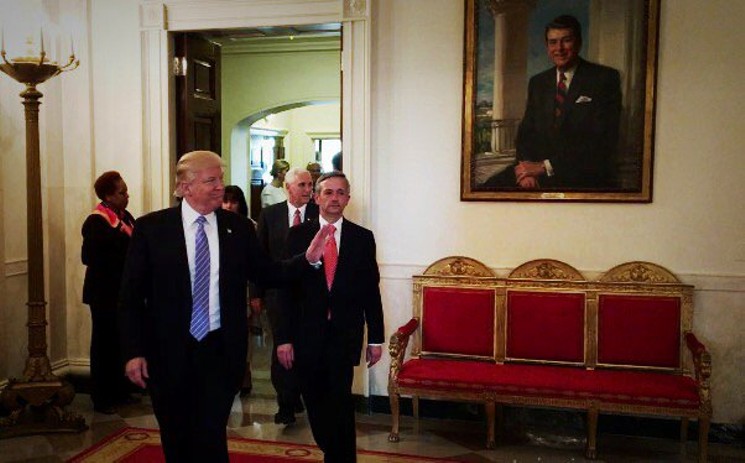 President Donald Trump and Robert Jeffress
Robert Jeffress via Twitter
6. The border wall is God's will, Jeffress says, not a Trump scheme. "The first step of rebuilding the nation was the building of a great wall," Jeffress said in a sermon given the week of Trump's inauguration at St. John’s Episcopal Church in Washington, according to The Washington Post. "God instructed Nehemiah to build a wall around Jerusalem to protect its citizens from enemy attack. You see, God is NOT against building walls!"

7. Here's what Jeffress had to say about Christians who have yet to embrace Trump. “Let me say this as charitably as I can,” Jeffress said, prefacing a statement that you just know was going to be as charitable as a loan shark. “These ‘Never Trump’ evangelicals are morons. They are absolutely spineless morons, and they cannot admit that they were wrong.”

8. Even the patron saint of conservatism isn't safe from Jeffress' tongue when Trump is in trouble. "The reason we supported President Reagan was not because we were supporting womanizing or divorce," Jeffress told Fox News. "We supported his policies."