The Most Impactful Images in Dallas History

For all of its focus on the future and economic growth, North Texas has been the backdrop for many momentous historical events. Some bring pride, others shame. Throughout our complicated, vibrant history, photographers have been at the front, capturing and preserving the good, the bad and the ugly. Here are a few highlights from North Texas history.

Though the Trinity has flooded many times, it was the flood of 1908 that prompted Dallas to build the Trinity Levee and harness the river. Doing so forever changed the way Dallas is oriented geographically, and now as the city strives to reconcile its socioeconomic divide between north and south, the once wild river bed is on its way to becoming the largest urban park in the nation and symbol of the city's growth.

Taken minutes before his death, this photo shows President John F. Kennedy riding in the motorcade through Dallas on Nov. 22, 1963, just before Lee Harvey Oswald fired the shots that killed him. Kennedy, hit in the neck and head, was rushed to Parkland Hospital, where he died of his wounds. This tragedy has shaped Dallas, leaving its ugly mark on the city’s West End district. Recently, the district has been undergoing a renaissance, turning what was a somber place of blight into the gateway to the city it was meant to be.

While the police were transferring Oswald from their headquarters to the county jail, night club owner Jack Ruby broke through a scrum of press folk, bystanders and law men and shot JFK’s assassin. Ruby’s shots fatally wounded Oswald, who later died at Parkland Hospital. Bob Jackson, who had been with the Dallas Times Herald for about three years at the time, shot this photo just as Ruby stepped in front of him to take his shots. Jackson won a Pulitzer Prize for the image, and it remains one of the most impactful photos of raw history to ever come out of North Texas.

Big Tex went up in flames, but now he is risen again.
WikiCommons/Christian Bradford
Big Tex Burns Down

Nearly seven years ago, Big Tex, icon of the Texas State Fair, caught fire after 60 years at his post. The mysterious blaze brought the big man low, destroying all but his 50-foot steel frame and the sleeves of his classic Lone Star Wrangler shirt. It was a sad day for Texas, but the Fair must go on, and the construction of a new Big Tex started right away. New Big Tex assumed his rightful place at the center of the fairgrounds in 2013 with a clean white shirt, new boots, and extra 5 feet of height for good measure. 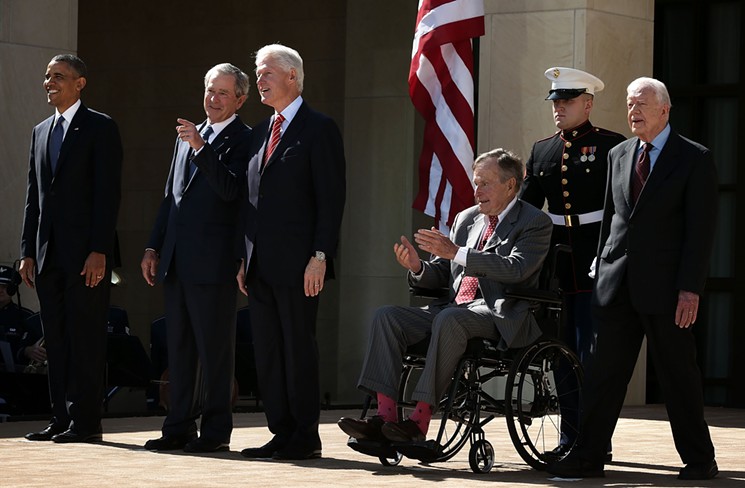 On April 25, 2013, five presidents gathered in Dallas to commemorate the opening of the George W. Bush Library at Southern Methodist University. It was the first time in history five living presidents had ever been in one place, and it drew a huge crowd. The Bush Library houses W’s watercolor paintings of dignitaries, family and friends; a twisted steel beam from the 9/11 attack on the Twin Towers; and gifts he received during his two terms as president, among other memorabilia from his presidency. The building houses the Bush Institute, a policy think tank, and serves as the backdrop for many nationally relevant debates, events and talks.

On July 7, 2016, a lone gunman opened fire on police officers at a Black Lives Matter protest. He killed five officers and injured 12 others. Tensions in the city had reached a fever pitch in the months leading up to this tragic night. On July 11, the city banded together to attend a candlelight vigil for the fallen officers, an act of solidarity in a time of division. 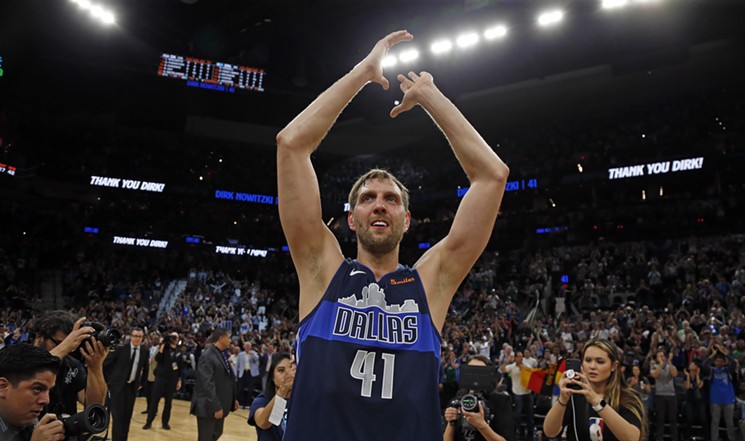 Possibly the most lovable German ever to lumber across the hardwood, he was the Mavericks’ north star through thick and thin for 21 seasons. From 1998 to 2019, Nowitzki racked up 31,000-plus points, was named league MVP, Finals MVP and won a championship. Nowitzki’s humility, philanthropy and athletic prowess etched his name into North Texas’ fabric forever. For real, we’re thinking about naming a street after him.


Federal Courthouse Shooting
On June 17, 22-year-old veteran Brian Clyde fired on the Federal Courthouse downtown. Law enforcement fatally shot Clyde, and he injured no one. The Dallas Morning News' Tom Fox took a haunting photo of the gunman, but we can't show it to you because we can't (or won't) afford their photo prices. No clear motive has been determined for the shooting, but Clyde's father says he thinks his son intended to commit suicide by cop. The days since have been tense, with a bomb scare and police activity resulting in closed lanes and roads around the courthouse.