Dale Davenport
Freddy Davenport and his son Dale bought Jim’s Car Wash at 2702 MLK Jr. Blvd. in 1993.
The core Achilles’ heel problem, the perennial failing and persistent flaw in the way Dallas City Hall thinks and operates, is its bizarre insularity, almost as if the world outside Dallas city limits does not exist. Maybe the strangest and most wonderful illustration of that problem is the now almost 15-year-long battle over Jim’s Car Wash on MLK Jr. Boulevard in South Dallas.

Fifteen-year battle over a car wash, you say? Other cities our size have elected whole new regimes, turned over voting populations and developed new urban images in 15 years. And we’re fighting over a car wash?

Yes, we are, because we either can’t remember anything or we can’t learn anything or we don’t believe anything until we get whacked in the head with a 2-by-4 and even that only really lasts until the bump goes down. So now Dallas is gearing up to get another good knock on the noggin delivered by the world outside.

We got a sharp taste last week in the form of a lightning-fast decision by the 5th District Texas Court of Appeals. And there’s an important reason behind-the-scenes why the appeals court acted with such uncharacteristic dispatch and efficiency to shoot down City Hall and a local judge in the car wash fight. I’ll get to that.

Dale Davenport, the owner, probably is not the only white man on MLK, but white people are sufficiently rare on that stretch of road — and Davenport has a sufficiently high personal visibility — that people tend to know him as the only white guy on MLK. The officials and the neighborhood leaders who hate Davenport and who want to shut him down are all black.

Meanwhile, the people who wash their cars and gather socially at the car wash, all of whom are black, love the only white guy on MLK. The black officials and the neighborhood leaders who hate Davenport also hate the black people at the car wash, in part because they love the white guy. I may not be explaining this right. It’s complicated.

“Those who refuse to play by such rules, the committees heard repeatedly, found themselves the target of random police searches.” — Texas Joint Committees

The people who gather at the car wash at night and especially on weekends are an outdoor beer- and wine-drinking, street-smoker-barbecue-eating, possibly also pot-smoking kind of a rowdy crowd. Most of the time they’re just having fun.

The anti-car wash crowd is more like, well, me. Like me, they are inner-city homeowners fighting a host of urban ills with crime at the top of the list. They don’t really like me, but we have a lot in common, so we can talk.

It’s different at the car wash. I have gotten to know the car wash crowd over a long period — going on 15 years — but I still can’t say I am exactly welcome there by myself except with Davenport as my chaperone, because part of the fun at the car wash is no white people. Except Davenport. And no bougie black people. I said this was complicated. Or not. I don’t know. I’m just doing my job.

Last month District Judge Eric Moye agreed with the city that the car wash was operating in violation of the city’s public nuisance law. Moye signed a final order composed for him by city attorneys that included a requirement that Davenport hire shifts of two licensed peace officers at a time to patrol his closed car wash “for 24 hours per day, seven days a week, to be sure that the Property is secured and not being trespassed upon.”

Davenport tells me he has priced the kind of security Moye ordered him to put in place, and the cost is just north of $50,000 a month. Moye has a long reputation as a straight shooter and close reader of the law. I have no idea how much he knows of the background here, although Davenport’s lawyer, Warren Norred, included a good history of the 15-year car wash war in his answer to the city’s original petition.

Ordering Davenport to pay shifts of two officers at a time to patrol his property 24-7 in perpetuity — that’s six eight-hour shifts a day — is essentially a move to break the bank and force him to sell his land, sell it fast and sell it cheap.

This very issue is a direct link with the last time the outside world reached in to konk Dallas City Hall on the head for messing with Jim’s Car Wash. In 2006, Davenport was a star witness before a joint session of two Texas House and Senate investigative committees in Austin looking into selective enforcement of the nuisance laws in Dallas.

Based in part on Davenport’s testimony, a bipartisan majority of the two committees issued a stinging rebuke of the city of Dallas in their final report. The report said over and over again that Dallas cannot use its nuisance laws to make a business owner responsible for crime that is rampant all over the area where he owns a business.

The report said Dallas was hammering business owners for not curing crime in their areas when it was the city itself failing to do its job: “The committees also heard from citizens who expressed concern about the inadequacy of law enforcement resources to help fight crime on their properties and in their communities.”

The report said Dallas was using the nuisance laws to pressure businesses to hire off-duty cops: “The committees were told by representatives of properties under a nuisance investigation and by ordinary citizens that police officers routinely suggested that the only effective solution to potential adverse nuisance abatement litigation from the city was hiring off-duty Dallas police officers.”

The committees found that Dallas was telling businesses not to expect the police department to help them: “In essence, the citizens of Dallas, who have paid their taxes for law enforcement services from the police department, were in some cases being told that even basic calls for service would be ignored. Some witnesses alleged they were told by the police department not to call about anything unless it was a life and death situation.”

The final conclusion of the report was that Dallas City Hall was running a protection racket, shirking its own responsibilities while it fattened its coffers by bleeding innocent business owners: “Underlying the repeated allegations heard by the committees is a recurrent theme of ward-based politics run amok as the selective enforcement of nuisance laws protect politically connected insiders and punish their competitors. 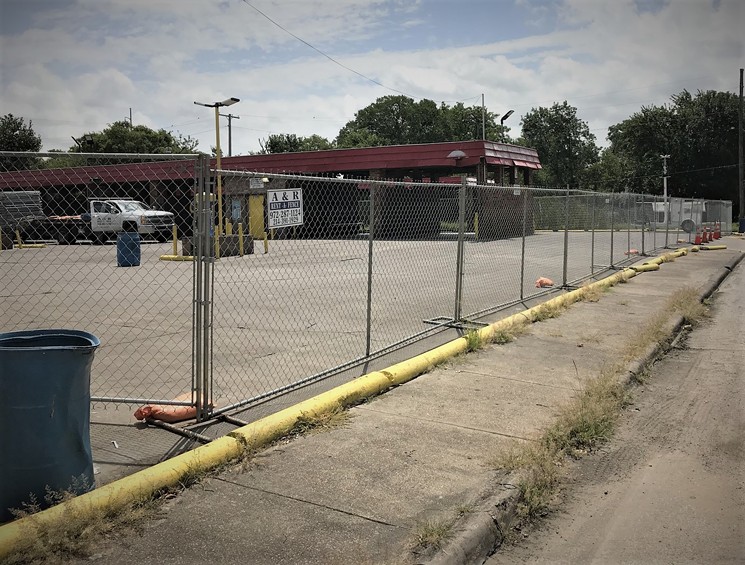 At the order of Judge Eric Moye, the Davenports installed fencing around their closed business.
Dale Davenport
“The committees heard allegations of undue political influence being used to benefit businesses and property owners who responded favorably to ‘suggestions’ that they channel funds into an incumbent official's favored nonprofit organization or that they hire security personnel from a company owned by another local elected official with powerful political ties.

“Those who refuse to play by such rules, the committees heard repeatedly, found themselves the target of random police searches, fire and other code inspections and costly, time-consuming litigation.


"The citizens of Dallas, who have paid their taxes for law enforcement services from the police department, were in some cases being told that even basic calls for service would be ignored." — Texas Joint Committees

“As a result,” the report concluded, “the committees are gravely concerned that the problems stemming from Dallas' use of the nuisance laws are the result of a unique and incorrect interpretation of those laws by city officials — wrongly taking the laws to mean that fighting crime is no longer the city's responsibility but has instead now become primarily the responsibility of private citizens and businesses.

“Furthermore, the body of evidence available to the committees also strongly suggests that the city uses the nuisance laws to intimidate, promote cronyism, and inappropriately use law enforcement personnel, specifically uniformed police and code enforcement officers, to deliver not-too-subtle messages of coercion and retaliation to legitimate businesses and property owners who refuse to submit to such tactics.”

So guess what? Almost every single one of these charges against Dallas City Hall is back on the table and back in action against the car wash, and what’s most astonishing is the sheer baldness of it, as if that report never happened. While a local judge signs an order designed to force the property owner to sell quick and cheap, community leaders in the area are saying openly they would like to have “a voice” in what happens with the property next.

Why would anybody have a voice in what happens with somebody else’s property? The answer, all too transparently, is that the current action against the car wash, like all of the previous attempts, is what the law calls a taking. City Hall, goaded by political forces in the community, wants to force Davenport to sell, because somebody wants somebody else to own that land and own it cheap.

So let’s go back to that lightning-fast decision by the appeals court. Almost overnight, the court granted a request from Norred, Davenport’s lawyer, that Moye’s $50,000 a month security requirement be expunged. This is a court famous for taking years to budge. How did Davenport get relief overnight?

Well, I don’t know for sure, but I wonder if it had anything to do with the one-on-one meeting Davenport had the day before with Texas Attorney General Ken Paxton. And I wonder if Paxton may have been especially interested in Davenport’s case because in 2006, when Paxton was in the Texas House, he wrote the report quoted above.

In other words, I wonder if the outside world isn’t just about to reach in and give Dallas City Hall another richly deserved goose-egg. And what I really wonder is how, after 15 years, Dallas City Hall still doesn’t see this stuff coming.