courtesy Frank Underground
Chef Jennie Kelley prepared a tsukemen carbonara with house-made black pepper pasta for Frank underground. It proved to be one of the most popular courses at their sold-out dinners.


For about seven years, Frank underground dinners has dominated the concept in Dallas.

To be sure, there are other underground/pop-up/private dinners/etc., in town that produce good experiences, but Frank found a way to break in strong and keep it that way.

Despite that, dinner service is on hold for a while.

Last month, the group sent an email to its list of 20,000 supporters with an announcement of a hiatus:

“Our guests have pressed us with questions over the years...When will you publish a FRANK cookbook? When will you offer cooking classes? Can I have a private dinner in my home? When will you take us on your fabulous trips around the world to dine and adventure like locals? When will you open a restaurant so that we can eat your food whenever we like?

“The answer to all these questions is, ‘We don't know!’ And if we keep up the current pace of FRANK, the answer will always be that.”

“Everyone’s kind of wondering what’s next for Frank,” says Jennie Kelley, one of the chefs who started and operates the underground dinner company. “I’m going to take some time to reinvent and reimagine what I want to do next.”

Those next steps are really open to whatever they want, she says. The time away offers a respite for her and her colleagues, chefs Ben Starr and Adrien Nieto.

“The decision kind of came really organically,” Kelley says. “My chef partner in January sent me this really sweet email: We’ve been doing this for seven years now, I love it, but I need a break.”

He mentioned August, which felt immediately right to Kelley.

“I thought that was kind of the universe telling me it was time to take a break,” she says.

The past decade has been a good ride for the Frank team, especially SMU alumna Kelley, who was a founding member of The Polyphonic Spree.

“I was the one girl that wasn’t eating off the rider,” she said of her 15 years touring with the band. “I took this time because I enjoyed food; it was almost like a culinary tour of the world. And I would come home and try to re-create these dishes.”

While she didn’t go to culinary school, she took master classes through El Centro College.

She became good enough to land a spot on the MasterChef TV series in 2011, where she worked for two months consuming a lot of “string cheese and gin.”

That’s where the three chefs met.

“I left a bottle of gin, with a note: ‘This is just the beginning. I can’t wait to see what’s next.’” she says. 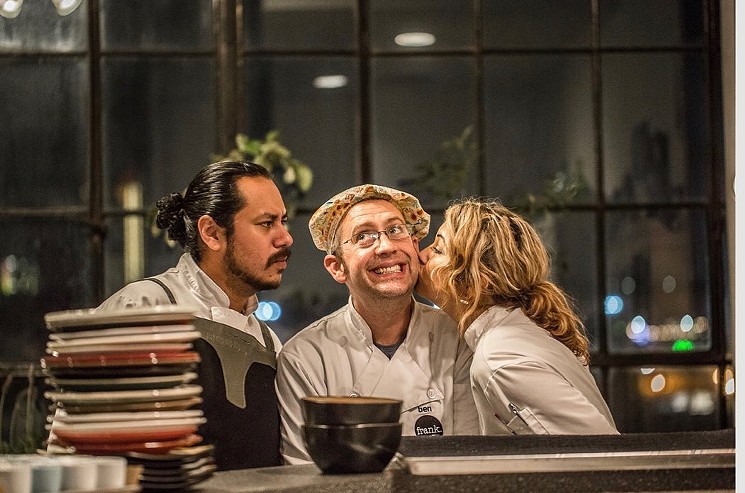 Chefs Adrien Nieto, Ben Starr and Jennie Kelley make up Frank.
courtesy Frank Underground
The underground movement started with the intention of doing them once or twice a month for family and friends, but when word about the dinners hit Yelp, everything changed.

The dinners were intimate and cool, offering a different menu every seating. They had the plan to move around to locations, schlepping ingredients, cooking tools and plates all over Dallas. But after a custom table was made for her loft, they all ended up being there.

Those who have tried to get a seat know the drill: You sign up after the announcement of a dinner and wait. On their side, they’re fielding the 500 to 1,000 people responding for 24 seats.

After this weekend, the rush will pause.

courtesy Frank Underground
“Frank 2.0 will be a little bit more. I’m not sure exactly what it will be, but it will be less guerrilla-style. Not in my home, for example,” she says.

Classes, a brick-and-mortar, a cookbook: All of those are options.

“I kind of want to give back to the city, because the city’s been so good to us,” Kelley says. “So I’m thinking of what the city might need.

“Chef Ben is a natural teacher. He needs to be doing foraging classes. … It’s a good time for everyone to see where their assets are. … I want to have time to think about what I want to do, and also what comes my way.”

Meanwhile, emails will still go out, updating followers. Keep a special eyelet in September, as that’s when Kelley expects an announcement for next steps to come out.

They may do some private dinners, but other than that, Monday, July 29, will be the last dinner served at Frank’s for a while.