Texas Used More Energy from Wind Than Coal this Year — What Does that Actually Mean?

Getty Images
For the first time, Texas produced more energy from wind than coal, according to the Electric Reliability Council of Texas.
July is likely to be the hottest month ever recorded on earth. And while the planet has been heating up, so too has been Texas' renewable energy industry.

For the first time in the brief history of wind power, Texas produced more energy from wind than coal, by a small margin. While this sounds like good news for renewable energy, and it is, what the numbers actually indicate is complicated.

Although wind power's lead in production was widely reported as 1% over coal, the real number is closer to 0.4%. So far this year, Texas has produced 21.37% of its energy from coal and 21.78% from wind, according to the Electric Reliability Council of Texas (ERCOT). 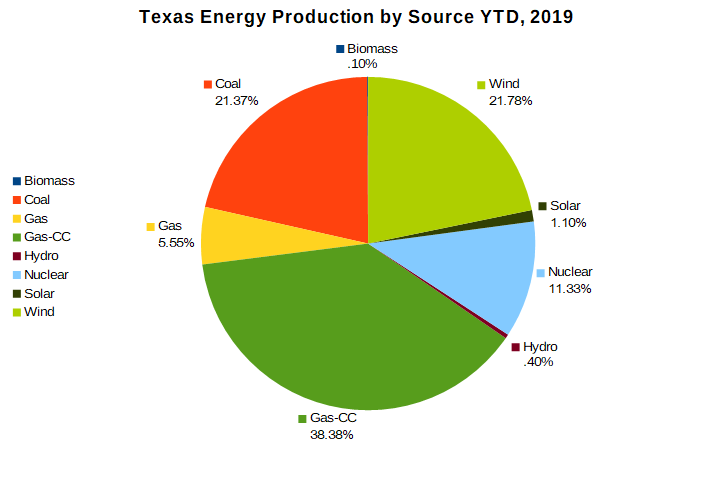 Electric Reliability Council of Texas
The milestone is part of a trend that started years ago, said Michael E. Webber, a professor of energy resources at the University of Texas at Austin.

A lot of wind blows in Texas, and improvements in turbine, storage and transmission technology coincided with the rise of the price of coal. Because energy use is driven by cost, Texas shifted gradually toward using more wind as it became cheaper and capacity increased, Webber said.

“Part of the decline of coal is cheap wind and solar,” he said.

Texas produces more energy from wind than any other state, more than three times as much as Oklahoma, which has the second-highest output in the United States, according to the U.S. Energy Information Administration. Even so, it is unlikely that wind's lead in generation will hold for the year, according to Warren Lasher, ERCOT's senior director of system planning.

The weather this year has been relatively mild, and coal is used most in the summer and winter, when extreme temperatures mean people heat and cool their houses the most, Lasher said.

But while this may not be the year wind generation stays above coal consistently, Texas has 22,000 megawatts of installed wind capacity and the potential for up to 36,000 megawatts to be connected to the grid in the future. It is important to note that ERCOT records the numbers of future connection by how many projects they have been asked to study. Not all projects included in potential capacity numbers will come to fruition.

If all of the wind capacity currently under review were to be approved and put into operation, Texas would have more than double its current wind energy capacity. Conversely, there are no new coal projects in the queue.

“As we move into the future, (wind generation surpassing coal) will be more likely,” Lasher said.

But wind energy is only one piece of the renewable resource picture for Texas. Currently, just 1.1% of Texas' energy comes from solar power, mostly because solar technology has only recently become financially competitive.


“The solution that works for sunny California might not work for cloudy Vermont.” — Michael E. Webber

Solar today is where wind power was about 15 years ago, Webber said. It's finally cheap, and production is set to accelerate. Texas became one of the top 10 solar producers in the country two years ago and has risen already to sixth place, he said.

As of the end of July, Texas had just 1,900 megawatts of installed utility-scale solar capacity, according to ERCOT, but up to 62,000 megawatts' worth of capacity in the queue for the next few years. That potential means that Texas has projects in the works that could eventually increase its solar energy generation by more than 30 times its current capacity.

Now that the price of solar equipment has become competitive in the energy market, Texas can begin to use the trove of wide, flat land in West Texas. The land is ideal for solar power, not only because of the ease of installation and a high number of sunny days a year, but also because much of the land is already connected to the energy grid by existing natural gas and oil projects in the area, Webber said.

“What we have in Texas is this 'can do' spirit and 'let's make money off our land,'” he said.

While all this may sound promising for Texas' renewable energy future, in spite of its high percentage of wind and growing solar capacity, the state still uses a larger percentage of power from natural gas than any other source — 38.3% — and has new projects in the pipeline, according to ERCOT.

But while natural gas does not pollute the atmosphere to the degree that coal does, traditionally extracted natural gas is still a finite resource and cannot be the primary power source for the state forever.

Whereas coal has to be imported from other states, a lot of natural gas is produced here and is easy to turn to for energy. When new facilities are built, the owners expect them to be used and to generate income for years, which risks committing the state to producing a certain percentage of its energy from those facilities, Webber said.

But there are options. Renewable natural gas, known as bio gas, can be pulled from decomposing natural matter in places like landfills, waste water and the atmosphere. This kind of gas is renewable and can be stored in and travel through existing natural gas infrastructure.

Although facility owners might prefer traditional natural gas, and bio gas is fairly expensive currently, new and existing natural gas facilities could use bio gas in the future, Webber said.

“In Texas we have a blessing of resources,” he said.

A low-carbon future for Texas will include a creative and flexible combination of those energy sources. And while the impact of energy production and pollution happens on a global scale, the limits of local resources should be what drives decisions about future energy plans, Webber believes.

“The solution that works for sunny California might not work for cloudy Vermont,” he said.

Unfortunately, although Texas has a cornucopia of energy production possibilities, it's not straightforward for the state to become a leading source of energy for the country. There are three power grids: Western, Eastern and Texas, Webber pointed out.

Most of Texas is not set up to transfer power to other parts of the country. Although interconnection would be relatively simple from an engineering perspective, it is complicated from a market and policy standpoint, he said.

Instead, he proposed a different solution. If Texas becomes a leading producer of clean energy, then so too could it become a front-runner in manufacturing and use low-carbon energy to make and export cleaner goods to the rest of the country.