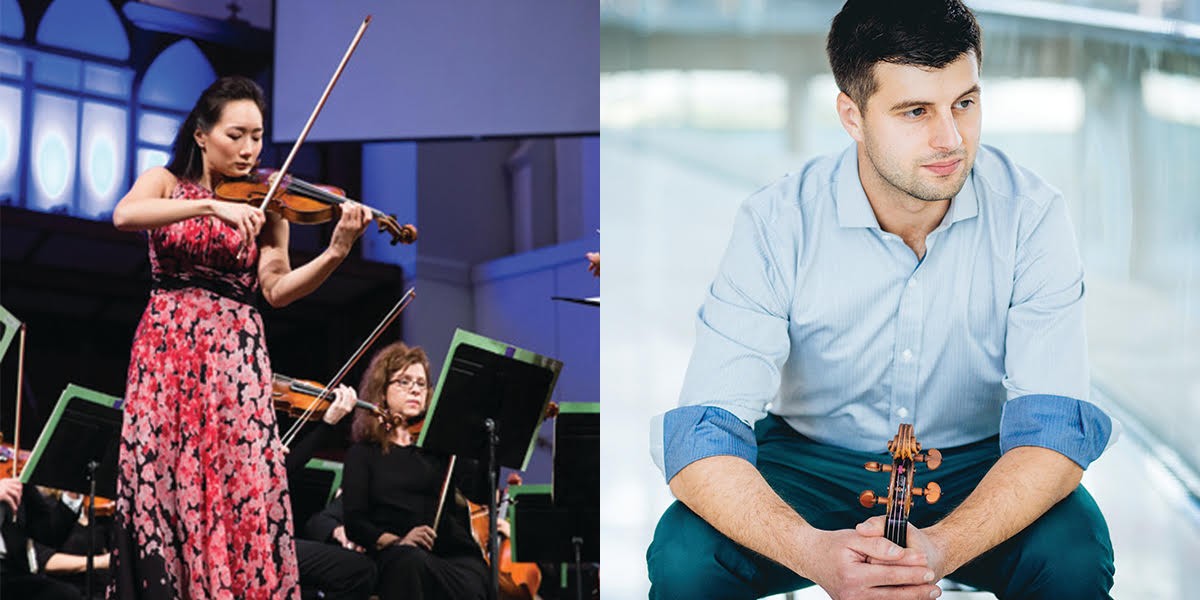 Antonio Vivaldi’s Four Seasons has been at the top of the classical music “charts,” so to speak, for hundreds of years now. One doesn’t even have to be familiar with classical music to recognize the piece, which was written in 1723 as a collection of concertos depicting each season of the year. Astor Piazzolla conceived his own version a few hundred years later, in the 1960s. The work is full of Piazzolla’s signature Argentinian flair and has become a staple of the repertoire in its own right as well.

The Dallas Symphony Orchestra will play both works side by side as part of their DSO on the GO concert series in various locations throughout DFW this week. We caught up with the two solo violinists, Nathan Olson and Eunice Keem, in the Green Room at the Meyerson Symphony Center, to chat about the program.

It’s going to be really interesting hearing these pieces back-to-back on the same program. What inspired this pairing?

Olson: You know, it's kind of a natural pairing. Obviously Vivaldi’s Four Seasons has been a huge hit for hundreds of years now. Although there were a couple hundred years when it wasn't played as much, but at least for the last like hundred years or so …

Keem: It’s made a comeback! [laughs]

Olson: Yeah, it’s been one of the most popular pieces. We did it here a couple years ago and sold out four shows. Piazzolla came along later and wrote his Four Seasons of Buenos Aires, not for the group that we're playing in, which is solo violin with orchestra, but for a smaller group with bandoneon and other authentic Argentinian instruments. Russian violinist Leonid Desyatnikov came along …

Yeah I wasn’t even going to attempt to pronounce his name ...

Olson: [Laughs] He came along and made this arrangement for the same group (solo violin and orchestra). So now that we have these two pieces, it's nice to kind of compare and contrast them by performing them on the same program. Piazzolla definitely references a lot of Vivaldi in his music.

People outside of the classical music world might not understand how much work it takes to prepare for a performance like this. Can you guys talk about how that works and your individual processes?

Olson: When you're playing a concerto you'd have to start thinking about it — well, depending on each person; but for me, at least a few months ahead of time. I'm not necessarily practicing it every single day at that point, but I’m beginning to look at it and kind of letting things seep in. Having played the piece once before definitely helps things come back a little quicker, and I don't have to go through the process of making a ton of decisions on bowings and fingerlings. When I was younger, I didn't used to mark as much on my part because I'd always just remember what I was doing. Now, I've learned to mark stuff on my part, not so much for the time I'm playing it now, but that way when I come back to it a couple years later, all my info is there and a big chunk of that prep time is cut down.

And how about you, Eunice?

Keem: I would say for me it’s some of the same process, along with studying the score and just listening to every kind of different recording out there. Sometimes that can be inspiring, or sometimes it can make me realize, “Oh, I definitely don’t want to do that.” But either way, it kind of helps reconfirm your musical choices.

And there’s no conductor for this program, which means you both will be leading the group, in rehearsals and performances? How is that going to affect your normal routines?

Olson: I think it does change the prep a little bit. Sure, as a soloist, you should still know the orchestra very well, but you don't have to know it as intimately. You know, you can know what it sounds like, and not necessarily knowing the score …

Keem: [We need to know] who has what and how all the lines come together. That’s where studying the score comes into play.

Olson: But since we can’t rely on the conductor to take care of that, we’ll have to be in charge of that.

I feel like that would be really challenging, in the Piazzolla especially, if only just because the orchestra hasn’t played it as often.

Olson: True. Yeah, we definitely have to know each sections’ part pretty well. In my solo part, there are a few places I've marked where I’ll have to go straight from playing something to cueing somebody in. So it’s just always being two steps ahead and being ready for all that stuff.

Will conducting be nerve-wracking for you guys?

Olson: Yeah, we were just talking about that the other day. [Laughs] I don’t think either of us feel that conducting is in our futures.

Olson: But conducting for a few bars is fine.

Would you say that because the Vivaldi is so well-known, that you feel like you have to play it a certain way and have less room to make different musical decisions?

Keem: Oh no, definitely not. Because it's been … I don’t want to say “overplayed,” but it's been played a lot. The spectrum of interpretations out there is wild. You have to decide how Baroque-esque or Baroque-y you want to perform it, because there are a lot of different ways to do it. While learning this and going through this process, I've discovered there's just so many different options that you could choose for so many different parts of this piece.

That’s probably nice for the audience too, because they want to maybe hear a fresh take on some parts.

Keem: Sure, definitely. And that’s the thing — there have been so many fresh takes done on it, and then people sometimes go back to the very straightforward version of just playing it down. Every version exists. So ultimately, I think it just comes down to ... in your gut, what it is that you want to interpret musically.

Olson: Yeah. The music is so popular and has been around so long, and as you said, performed so many different ways that I think, as a musician, you come to find what your own take is on it. It’s not one of those pieces that's only been recorded two or three different times, so you have those particular recordings in your ear. The printed music itself is what's in your system, and the way you feel it is how it comes out.

How do you think the audiences are going to receive this program?

Keem: I think they’ll like it! I hope they will.

Olson: I think they'll love it. The Vivaldi is obviously very popular, and then there’s a huge contrast with this tango-inspired Argentinian music. But the Piazzolla is also very accessible and very audience-friendly.

Keem: I think it’s exciting. The Piazzolla is actually quite popular as well, but it just hasn’t been around as long and hasn't been performed as often. So that might be the newer piece for people to experience, but it's super accessible and fun.

Olson: I think it's also just a fun contrast. The one difference in instrumentation is that there's harpsichord in the Vivaldi. So it has that Baroque, icy texture, and then we have the total opposite in the Piazzolla with its sultry, Argentinian vibe. One interesting difference also is that, as you touched on a little bit Eunice, in the Vivaldi, there's a lot of kind of specific programmatic things, where he’s said things like “this is a bird call,” or this is “the wind of the West.” Piazzolla doesn’t notate those specific descriptions. It's more just each “Season” has its own kind of vibe.

And since Piazzolla’s version is the Four Seasons of Buenos Aires, it’s opposite or a mirror image of Vivaldi’s, right?

Olson: Yeah, exactly. Since Argentina is in the southern hemisphere, when it's summer down there, it's winter up here. Piazzolla actually kind of references that. For example, in “Verano Porteño,” which is summer, he reference’s Vivaldi’s “Winter.” So he makes a point of drawing that parallel.

Do you think that this could be jarring for audience members to go from listening to Vivaldi directly into Piazzolla? And maybe that’s the intended effect?

Olson: We’ll see! I know that programming these two pieces has been done before, but I've never personally experienced it either as an audience member or as a performer. So honestly, I'm kind of interested to see how it feels to switch back and forth. I think it may be a little jarring for us too.

Oh yeah, that’s a good point. It must be quite an adjustment for the players themselves, too.

Olson:Yeah, and we actually don’t have a ton of time to put this all together. We have two rehearsals, so it’ll be pretty quick. But in a way, that makes it a little simpler to figure out.

Head to one of the DSO’s concerts this weekend — Sept. 6 in Oak Cliff, Sept. 7 in Preston Hollow or Sept. 8 in Plano — to experience the final product.