“It’s pretty cool to be reading stories about what Dallas restaurants are, rather than what they aren’t,” Vana wrote.

For years, Dallas restaurateurs were dogged by the things critics said they weren’t: creative, interesting, diverse, fun, sophisticated or cool. Instead, we’ve been told our city’s dining scene is obsessed with fads from elsewhere, monotonously meaty, devoid of an original style and restricted to only three or four places that would make the cut in a “real” food town.

That reputation was only ever part-true.

Yes, we have a lot of awesome burgers, a sea of corporate mediocrity and a few sexist steakhouses, but that was never the whole story. Many of us never even knew the full story: It’s only in the last year or two that Laotian, Nepali and Iraqi foods, for example, started to gain recognition outside of those immigrant groups.

But Dallas and its suburbs are thrilling, dizzying places to eat, and now the rest of America is finally noticing.

Chef Joel Orsini plates food at Izkina, which is now rebranded as Booty's with Orsini still at the helm.
Alison McLean
So let’s all take a moment to step back and congratulate ourselves on what we’ve done. In the last few years, especially, the Dallas food scene has enjoyed a creative resurgence.

Maybe the biggest difference the past few years have made is in the caliber of our neighborhood spots. Beloved corner fixtures where everyone can hang out and enjoy brilliantly made food are a must in every great city, and many of ours are surprisingly young: Macellaio, Sandwich Hag, Sachet, Petra and the Beast, Hillside Tavern, Khao Noodle Shop, Nori Handroll Bar, Homewood, Ceviche Oyster Bar, Big Claw, Munchiez, Momostop, Peak Restaurant, Izkina/Booty’s and José are all only a year or two old.

We’ve made it, Dallas. This isn’t just about Bon Appétit, either: Please notice that every photograph in this post is of a restaurant the magazine did not have room to feature. 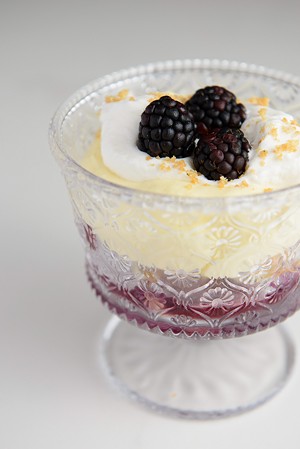 Blackberry trifle at Homewood
Alison McLean
Full disclosure: I helped Bon Appétit put together the article, building a travel itinerary for writer Hilary Cadigan, who had to eat at every stop on our list in just two and a half days.

The first thing she said to me when we dined together at Izkina was, “First I had lunch at Sandwich Hag, and then I had a second lunch at Nori, and my third lunch was at Petra and the Beast.”

Izkina, which sadly was cut from the story when it rebranded but still sports the brilliant kitchen leadership that got it considered in the first place, was her third dinner of the night, and she made two more stops before bed.

Before Cadigan visited, I crossed out four or five of her planned meals and substituted about a dozen of my own, which only made her schedule crazier. I especially don’t know how she survived the last half day, in which she looped around the suburbs filling up on Syrian ice cream and Nepali momos before catching her flight back and, hopefully, getting a very good nap.

But Cadigan didn’t tell me what the story was. She said it was “just a travel piece.” Even when Bon Appétit started scheduling photo shoots at Las Almas Rotas, Izkina and Sandwich Hag, I thought it was going to be a harmless little story that said something like, “Dallas isn’t super lame anymore, and you are now allowed to admit you like it.”

Well, take that, America. Not only are we not super lame anymore, we’re pretty darn awesome. 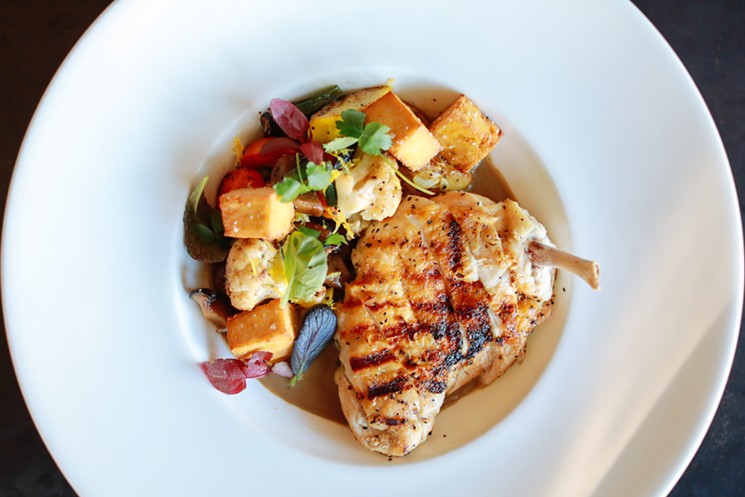 This may look like a simple chicken dish, but don't be fooled: This Mot Hai Ba treat is a savory flavor explosion.
Kathy Tran
Dallas, it’s time to take a victory lap. It’s time to celebrate what we are, rather than getting down about what we aren’t. It’s time to get over our city’s insecurities and embrace the traits that make us special.

So many of our chefs, bartenders, mixologists and restaurateurs have been working hard for years to make this city a fascinating one to eat in. That includes the immigrant communities we at the Observer have tried to document, but it also includes numerous high-profile chefs who’ve abandoned the gaudy, rich plates of “Southwestern” cuisine in favor of all sorts of weird stuff.

As Bon Appétit itself says, “These chefs are ditching the large-scale restaurant group models of yesteryear and instead forging their own paths, creating highly specific, highly personal spaces that feel more like stepping directly into said chef’s brain.”

Hell yeah. But also: Let’s keep it up. Hungry eaters, go out and support all the fascinating, personal restaurants that are popping up around Dallas. Chefs, keep being hungry yourselves. Food writers, keep helping us reframe the portrait of our city, and keep rethinking who belongs inside that frame. Investors and landlords, take note of where all the cool kids are going and back more business plans like those.

Who knew Dallas food could be creative, interesting, diverse, fun, sophisticated and cool? Well, some of us did. And now the rest of America is finding out. We mustn’t let them down.