Dallas Budget Is a Hit, For Now

dallascityhall.com
Dallas Mayor Eric Johnson got his first budget approved unanimously Wednesday.
The talking point Wednesday at City Hall, for almost everyone, was unity. The Dallas City Council, fractured as it's been presented in recent years, signed off unanimously on the city's budget, allocating Dallas' resources to the city's parks, libraries and social programs.

The biggest chunk of the budget, as it does every year, will go to public safety, but this year, so will the lion's share of the $40 million in increased property tax revenue Dallas is slated to take in. Dallas Mayor Eric Johnson, the City Council and Dallas' police associations are more than OK with that, they were all happy to say.

The new, big-ticket items in the budget are all public-safety related. There's money in the budget for hiring new police officers, if the Dallas Police Department can bring them in quicker than officers can leave the department. Midcareer cops will benefit from the new budget, too, seeing their wage scale bumped the year after the city increased starting pay for new cops to $60,000.

All told, $874.9 million, more than 60% of the city's general fund, will go to public safety, which is made up by Dallas' police and fire departments, marshal's office, municipal courts and emergency management department.
click to enlarge

Mike Mata, president of the Dallas Police Association, is also happy with the budget.
Jim Schutze

Mike Mata, the president of the Dallas Police Association, said Johnson, the City Council and Dallas' city staff finally did right by their police officers and residents who are concerned about crime in the city. DPD can now retain the officers it hires and trains, Mata said, rather than losing them to better paying departments in surrounding areas.

"I'm not shy to sometimes condemn actions by the City Council," Mata said. "Today is not that day. Today I came to thank you."

At a press conference after the budget vote, council members offered only minor criticisms of the plan they'd just approved. 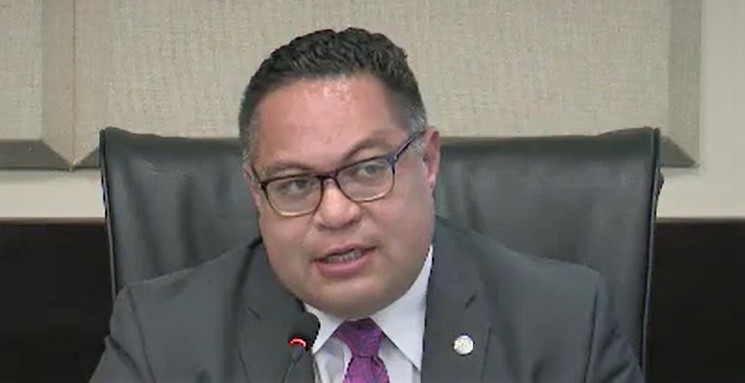 Narvaez pointed to expanded access to Dallas recreation centers for teenagers and city-funded legal services for immigrant residents as examples of social programs in the budget that could be built on in the future.

The strongest voices against the budget Wednesday came from Dallas' activist community. Sara Mokuria, the co-founder of Mothers Against Police Brutality, said that the city's recent police staffing study showed that DPD's problem isn't a lack of officers, but a lack of appropriate management.

"This budget, which we say is a public safety budget, should be an anti-poverty budget," Mokuria said. "With a 1% reduction in public safety spending, we would not have had the fight pitting youth services against elderly services, against whether we should have cultural programming in this city. That would be $5 million that we could pour into our residents."