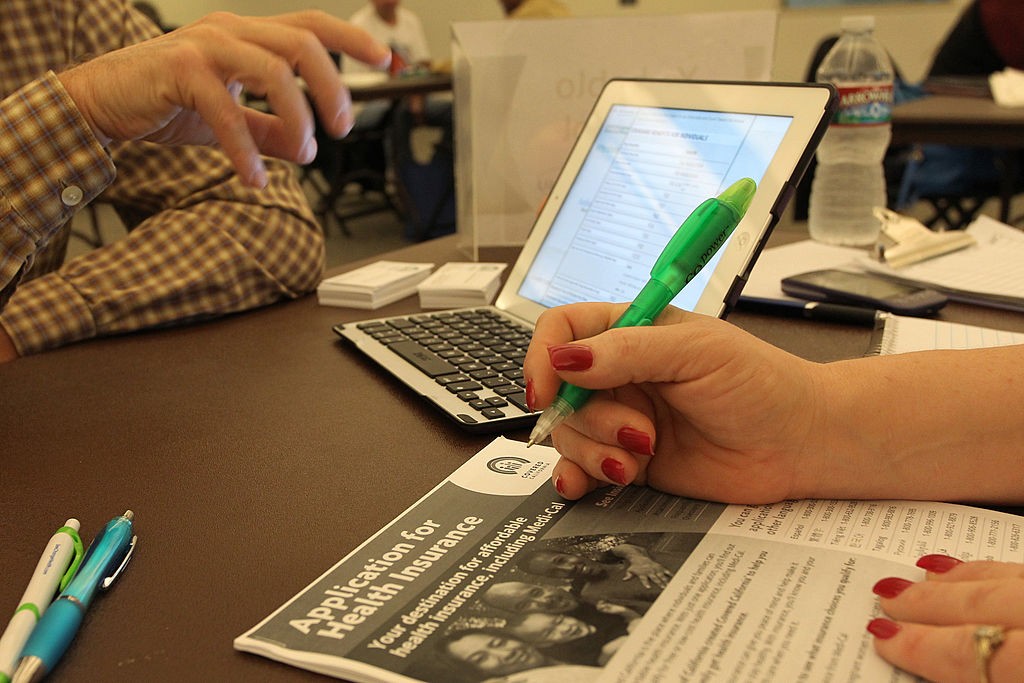 Getty Images
Clinics are overwhelmed and kids are suffering because of poor policy decisions on the state and national level, advocates say.
The Dallas-Fort Worth area has the lowest rate of children’s health insurance coverage among the 25 largest metro areas in the United States, according to new census data released Thursday.

Across the area, 11.7% of children are uninsured, continuing a multiyear slide that reflects statewide trends.

Adults in Dallas and its surrounding cities fare only slightly better. Their uninsured rate, 17.6%, is surpassed only by the Houston area. San Antonio is third, giving Texas the dubious honor of containing the three metro areas with the worst insured rates in the nation.

Dr. Philip Huang, director of Dallas County Health and Human Services, called the rise in uninsured concerning and said it would require the county to direct more resources toward indigent care. Without insurance, more and more families seek care from county-subsidized clinics and emergency rooms, where they are entitled to care regardless of whether they can pay.

Texas has by far the highest uninsured rate in the nation. Anne Dunkelberg, associate director at the Austin-based Center for Public Policy Priorities, says it's a problem fueled by the rising costs of private insurance and a decline in the use of Medicaid, driven by state and federal policies that have made it more difficult for people to enroll.


“It’s a huge barrier to economic prosperity. If you don't have health insurance — unless you're very, very wealthy — you don't have economic security.” — Anne Dunkelberg

Enrollment in Medicaid and the Children's Health Insurance Program, a program for low-income families with children, has been declining since late 2017, according to a report released by the center. Dunkelberg blames strict eligibility policies. A bill loosening those policies recently passed through the Texas House but died in the Senate.

Texas is also one of only 14 states in the nation that didn't accept federal funds to expand the qualifications for Medicaid, leaving many families not poor enough to qualify for federal programs like Medicaid but still unable to afford private insurance premiums and copays.

The cost of private insurance sold on the federal marketplace in Texas surged in 2018. The cost of the average lowest-cost silver-tier plan available in Texas rose 35% from the previous year, according to data collected by the Kaiser Family Foundation.

Without insurance, stress and other chronic health conditions can make it difficult for low-income families to rise up the economic ladder.

“It’s a huge barrier to economic prosperity,” Dunkelberg said. “If you don't have health insurance — unless you're very, very wealthy — you don't have economic security.”

Many of these families end up in places like the Agape Clinic, which offers free medical care at its East Dallas clinic. Stephanie Bohan, its executive director, said that the clinic has been overwhelmed in recent years by patients seeking care. It can take over a month for a new patient to get an appointment.

“Most of what I see are hard-working people who are trying to make ends meet. Medical care is just so expensive that they cannot access it,” she said.

More and more people are coming in already sick, a result she attributes to a lack of insurance.

“They don't get preventative care," she said. "By the time they come in, it's because they're sick or they have a disease.”

She’s currently raising money to expand to a new location in South Dallas.

Children are especially vulnerable to a lack of insurance, explained David Murphey, a researcher at the Maryland think tank Child Trends. Studies have associated a lack of health insurance not just with increased rates of sickness but also school absenteeism, child abuse and parents forgoing vaccinations.

“Ultimately, we all pay, because we’re all buying into this healthcare system,” he said.

He and Dunkelberg agree that a major problem, particularly in Texas, is the “chilling effect” of the attention given unauthorized immigration by the Trump administration. Studies have found that some parents who aren’t citizens are pulling their children off government benefits out of fear of being denied citizenship in the future.

“We have a role that we need to play in getting the word out that that is mistaken and that it’s safe and important for those kids to get healthcare,” Dunkelberg said.