Sean Gladwell/Getty Images
Be afraid.
For many of us, October means that it's haunted house season. For unemployed actors, it's Christmas-is-nearly-upon-us season. With so many haunted houses to choose from, it’s hard to decide where to spend your hard-earned money. After all, what each person seeks from their haunted house experience can differ wildly. Maybe you need something really hardcore to scare you because you grew up in a mortuary and nothing affects you anymore except for the most depraved acts of medieval torture. Or maybe you’re a coward but your girlfriend really wants to go, so you need to find the place that’s designed for children (and try to sell her on how scary the black-light bounce house is so you seem like a team player). Whatever category you might fall into, this guide will cover you.

First, we need to make a blanket statement warning you of the rules that almost all of these spots will tell you: Don’t wear elaborate costumes or masks — save those for the next Star Wars premiere or for the next pain-in-the-ass themed party that you're hosting. Don’t be drunk. Don’t bring guns. Remember that the ghosts aren’t real, and you can’t shoot a ghost to death even if they were, but most importantly: It’s definitely a 16-year-old trying to save up for a car and, again, not a ghost. So don’t shoot anything.


Now, in no particular order, is your guide to some of the best haunted houses in North Texas this year.

Known for its cinematic production value and immersive creative scare tactics, Dark Hour Haunted House is a must for horror fans, without having to make the long drive that some of the other locations on this list require. This year the Vampire Witch Lilandra will be pitting her coven of the undead against any men and women brave enough to walk into their den. Among a cemetery, a vampire’s nest and a crypt city of the undead, Dark Hour will be the scariest thing in Plano outside of being pulled over by one of their cops.

Moxley Manor is a reliable source of scares for those living on the FW side of DFW, and it's on its 10th year in the business of scaring Texans. The story line for Moxley will appeal to fans of traditional haunted houses, with the mansion being home to a murdered family whose spirits are trapped within the walls. The creative group behind the long-running indoor haunted house go through great pains to make the experience different every year. The actors have a no touch policy — even if you ask ever-so-seductively — and there are no refunds under any circumstances. Price of admission will also provide you access to two other scare attractions on the property, Regan’s Revenge and Big Top Terror. On Moxley's website they advise that the place is suitable for children 10 and over, so keep those chicken-shit 9-year-olds at home where they belong.

Six Flags is always a good bet if you have multiple people in your party who aren’t excited about being scared, but love riding on boat adventures starring Bugs Bunny. This also stands as one of the most family-friendly options, as the amusement park sends out a warning to clear out the little ones before the scare actors begin to roam the park. You can still have the kids in the park after Six Flags switches over to horror mode, but therapy bills are not included in the ticket price. The haunted attractions are an extra fee, but you can always count on discounts for tickets by bringing some kind of soda can or random trash to the gate. What do they do with all those cans? Is Six Flags really a front for a recycling center? 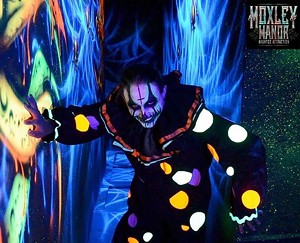 Meet some friendly people this year at the best haunted houses in DFW, like this guy at the Moxley Manor.
courtesy Moxley Manor

Both affordable and close for Dallas residents, J & F House of Terror is back for another year of terrorizing locals. This year’s theme is "urban legends," and the crew behind J & F promise that not only is this year’s maze longer, but also scarier than ever before. Once you’ve survived the house, there are more reasons to stay, with psychic readings and an escape room available to entertain your entire party. The main attraction is recommended for ages 16 and older. 15 and under require parental supervision so that the older kids can make fun of them.

Normally five haunted houses would be an overachievement for a scare site, but Screams doesn’t get close to stopping there. The Halloween theme park is a one-stop shop for all things spooky, offering something for all ages including karaoke, games, a food court and much more. Screams is primarily outdoors, so if you’re going to make the trip, come prepared for any weather conditions. (Rain doesn’t slow down any zombies.) While the spooky fun is done when one exits most of the other attractions in DFW, Screams gives you reasons to stay until they kick you out.

This converted Fort Worth meat-packing plant guides the courageous through multiple floors of murder and mayhem. Expect chainsaws, jump scares and more from the American Haunts group, the company responsible for creating haunted houses in states all across the country. Check out the Cutting Edge Haunted website for details about purchasing a two-park pack that also grants you admission to the Thrillvania haunted houses.


Voted No. 1 Attraction Spot of 2016 by Texashauntedhouses.com — which is a very specific website —The Parker House is quickly becoming known as a spot to check out every October. The cost of admission will grant you entry to three attractions: The Parker’s Mortuary, The Parker Plantation and Ratliff’s Sanitarium. Check out the Parker House website to get a little more back story on the particular evil spirits you’ll come across in this Denton spot, which adds a nice touch to elevate the scares past the generic zombies you might otherwise see. Proceeds from the house also benefit The Heroes of Denton County, a charity for the families of first responders injured or killed in the line of duty.

With three attractions spread across 50 acres, Thrillvania is probably one of the more recognizable names when thrill seekers go searching for a jolt of adrenaline. The park’s most well-known scare house, The World Famous Verdun Manor, contains all of the staples of horror, including werewolves and half-animal science experiments. Once you’re finished surviving Verdun Manor, you also have Cassandra’s House of Clowns and Sam Hain’s Trail of Torment to contend with. The crew behind Thrillvania advise that it takes a few hours to make it through all three attractions, so make sure to arrive as early as possible so you don’t miss out.

Hangman’s House of Horrors is a Halloween institution in Fort Worth, having been around for more than 30 years. That’s longer than most modern marriages, by about 27 years. The 2019 edition should be really interesting for fans of Texas lore, as the haunted attraction will explore the Lone Star State’s murky past with an added dose of jump scares to make sure no one dozes off during this history lesson. For those with younger kids who want in on the action, mark your calendar for Scaredy Cat Night on Oct. 13. On this occasion the lights stay on and the actors pass out candy instead of scaring

Make sure you have a full day available when you visit the Reindeer Manor Halloween Park, as their four haunted houses will keep you running in fear you might miss something. The four houses cover the range of any phobia, including killer clowns, werewolves, vampires and a morgue where the dead just might not stay dead. Striving to be more than one isolated haunted house, Reindeer Manor is much like Screams, where a carnival experience is offered, providing ax-throwing, stage shows and games to keep even the most easily frightened person entertained.