Nick Bostick
Protesters, upset with the outcome of the Amber Guyger case among other grievances, arrived right on time for the 6:30 p.m. Oct. 2 meet-up outside the Frank Crowley Courthouse. The meeting was organized by Next Generation Action Network.
The scent of burning sage and the sounds of Jamaican dancehall legend Buju Banton wafted down the steps of the Frank Crowley Criminal Courts Building on Wednesday night as protesters gathered to react to the sentencing of former Dallas police officer Amber Guyger.

By the end of the night, one in the crowd would be booked into the same jail where they gathered.

The protesters had planned to gather outside the courthouse regardless of the outcome of her case. But after hearing that Guyger would be sentenced to 10 years in prison for the 2018 murder of Botham Jean in his own apartment, protest organizers reacted quickly, sending out a text message notification calling the sentence “disrespectful” to both Dallas and the Jean family. Next Generation Action Network founder Dominique Alexander seemed especially upset as he addressed the protesters yesterday evening.

Dallas police officers move protesters off streets and onto sidewalks.
Nick Bostick
What would constitute justice in the eyes of the protesters, barring a complete overhaul of Dallas Police Department policy, are the resignations of Dallas Police Association President Mike Mata, Officer Martin Rivera as well as Texas Ranger David Armstrong. The first two have been accused of tampering with evidence during the beginning of the investigation into Jean’s death. Rivera has also been targeted by Mothers Against Police Brutality, who are hoping to reopen the investigation of the 2007 shooting of Brandon Washington. He was shot and killed by Rivera over an allegedly stolen candy bar.

Armstrong defended Guyger and testified that she justified in shooting Jean in testimony given while jurors were sequestered. Armstrong was the lead investigator on the case but has since been accused of being given leniency by the Texas Department of Public Safety in 2017. While driving double the speed limit in a state-issued car, Armstrong’s vehicle struck a pickup that had run a stop light, killing the driver. The Texas Ranger was found to be responsible for the incident but was never punished.

“I don’t want to see another 18-year-old on a stand be burdened with the responsibility to forgive the murderer of his brother,” imam and civil rights activist Omar Suleiman said, referring to the hug shared between Amber Guyger and Botham’s brother, Brandt Jean, after her sentencing. “This isn’t about vengeance, this is about justice. This isn’t about punishing Amber Guyger, this is about stopping more Botham Jeans from being murdered.”

Two members of the Dallas Nine, a group of activists who were arrested on Sept. 15, 2018, for obstructing the intersection of North Collins Street and East Randol Mill Road outside AT&T Stadium, were the last to speak at the protest. Melissa Perry called Guyger’s conviction a “small victory” and called to the crowd for continued support.

The protesters then gathered at the sidewalk in front of the courthouse, linking arms as they attempted to form a square around the intersection of South Riverfront Boulevard and West Commerce Street. Dallas Police officers were quickly on the scene to clear the roadway, saying some young children were part of the group in the middle of the street. 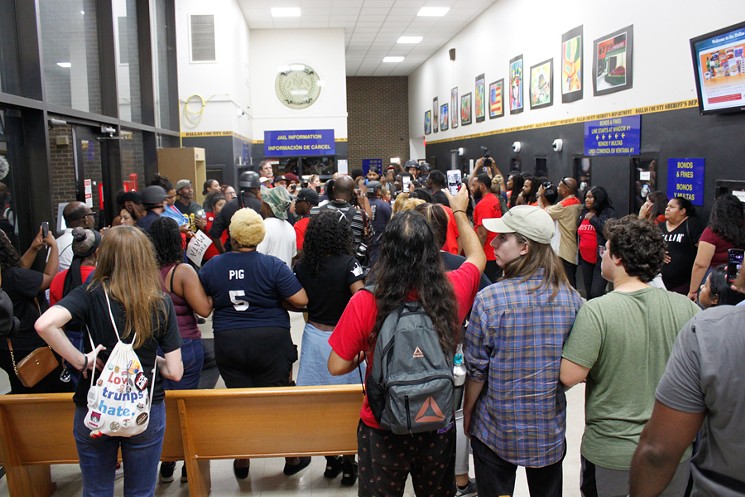 A little more than half of the protesters attempted to rush the courthouse but only got as far as the lobby before police escorted them out.
Nick Bostick
Protesters hurled insults at police as the protest moved east down Commerce Street before entering the courthouse lobby from the southern entrance. More officers with riot shields soon streamed into the lobby and threatened to arrest those who refused to leave the premises, which they did shortly after. But not before Alexander, the protest organizer, promised to return in time.

After regrouping, protesters marched up Elm Street, followed by more than a half-dozen police vehicles, a number that more than doubled by the end of the night. Both groups made a lap around West End as the number of police in the area continued to swell, armed with rifles, pepper ball launchers and fully extended batons. Officers in vehicles, in helicopters and on foot followed, with no major altercations until the group started making their way back through Dealey Plaza.

Police officers mostly kept protesters off the streets and away from major storefronts and buildings, even racing ahead to intercept the protesters as they approached the entrance to the Omni Hotel. It was then that the crowd began to head back to the courthouse. Going west on Main Street, protesters mocked Guyger and shouted her booking number at officers, some yelled “No tears for dead pigs,” many more shouted variations on “fuck the police.” Soon after the crowd crossed North Houston Street, police officers grabbed one of the protesters as she moved toward the sidewalk, throwing her to the ground and arresting her on the spot.

Identified as Safiya Paul, a 32-year-old St. Lucia national, she was seen carrying a St. Lucian flag during the protest. Paul remained in jail Thursday morning in lieu of $500 bail.