Protesters and Police Scuffle During Inaugural Meeting of Oversight Board 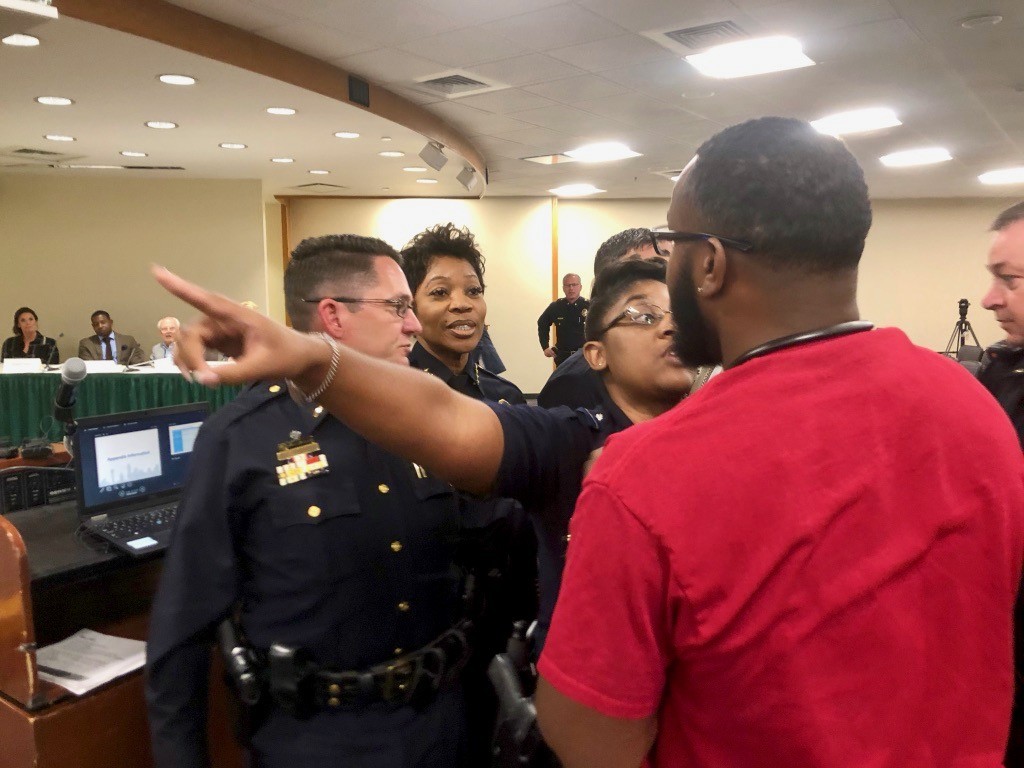 The board overhaul was approved by the City Council earlier this year after years of debate, resulting in a compromise that created a new office to monitor departmental investigations. The board, however, lacks fundamental investigatory powers such as the ability to subpoena officers.

What had begun as a rote presentation outlining the board’s new duties was interrupted by an altercation and ended with a string of passionate pleas by activists demanding effective oversight.

As interim chairman Jesuorobo Enobakhare Jr. attempted to close the proceedings, there were shouts from the crowd demanding the opportunity to speak.

“Shut up, you ignoramus,” someone yelled at the protesters, at which point Chief U. Renée Hall stood up and told officers to remove the group of activists who had interrupted the proceedings.


“This is a feel-good board. It has no teeth whatsoever." — La'Shadion Shemwell

Four officers flanked the podium at the center of the room as the protesters advanced. Reinforcements streamed in from the wings as people stumbled over chairs.

In the midst of the screaming match, Hall grabbed a microphone and angrily gained control of the room. The chairman called the committee back to order and allowed a period of public comment to begin. Nearly a dozen people spoke at length, expressing doubts about the board’s effectiveness and the intentions of some of its members.

Activist and McKinney City Council member La'Shadion Shemwell approached the microphone, armed with knowledge of a new Texas law that requires all official meetings to include a period of public comment.

“We will be at all public hearings, and you have to hear us. That’s our right,” he told them.

Shemwell pointed out that the board’s powers are limited: The director of the new oversight office is not obligated to keep the board informed, and Hall remains the final decision-maker.

During the initial presentation by the chief and other police department leaders, board member Perro Henson had asked when the board would be given an opportunity to provide input. He was told that it could recommend an independent investigation.

“This is a feel-good board. It has no teeth whatsoever,” Shemwell said later.

Many of the speakers also confronted members of the board who were appointed despite objecting to the board’s existence.

“If you are or have been against strong police oversight … you are going to taint the community's trust in the entire board, making their task impossible,” said Bruce Orr.

Tami Brown Rodriguez called for disbanding the board when running for City Council last year. Asked to explain why she had now accepted a position on it, she said, “I’m here because I believe in community, I believe in the rule of law.”

Janice Coffee, another board member, admitted that she had objected to the board in the past but, she said, “I would like to have someone change my mind up here, I want to see what’s going on.”

“I think I need to be given a chance,” she told the Observer after the meeting.

At one point, Hall took the microphone and spoke to the crowd. “I apologize for my temper earlier and I hope that this does not continue every meeting. This is for us to be unified,” she said.

After the meeting adjourned, Hall debated with activists whether officers had initiated the shoving match during the scuffle. She argued that the officers were simply standing their ground.

In an interview, board member Henson said he understood why activists were frustrated. “Community should be involved. With that said, it’s a partnership. We need to work together to get things done. The police department needs some work, without a doubt,” he said.

At one point, slamming the podium for emphasis, Dr. Pamela Grayson explained the board’s importance to a community rocked by the murder of Botham Jean in his own apartment by an off-duty police officer.

She has a son who is 25. “He lives alone in his apartment and eats ice cream on his couch,” she said, in reference to the circumstances of Jean’s murder.

“If you can’t help me, get out of my way,” she concluded.