Joel Orsini Isn’t the Only One Out at Izkina/Booty’s: Meet Yoni Lang 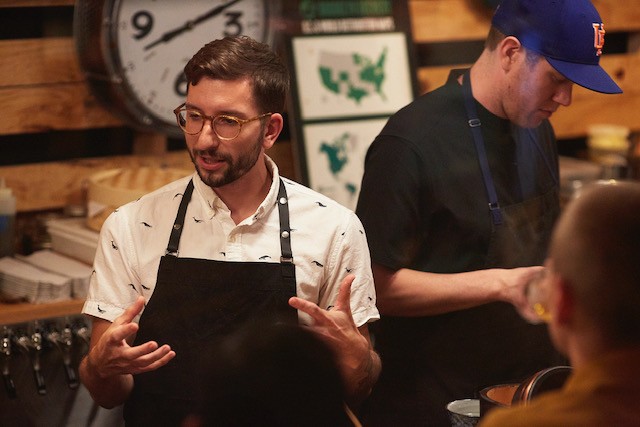 Rui Nakata
Yoni Lang has worked his way through various kitchens, learning something from each one. After working at Izkina/Booty's, he's now looking north.
Have you met anyone thrilled about the lovely hostel-adjacent bar/restaurant Izkina being rebranded as Booty’s?

We haven’t. Critic Brian Reinhart went to the Bar Formerly Known as Izkina to try the food, and it was still quite stellar. After all, "Joel's still there," many of us said.

But the business name. Yeesh.

With that name change came the menu of “international street food” and some untz-untz-untz music in the later evenings. It may not have been at all surprising when news came that chef Joel Orsini was leaving the place.

But that’s not the only news. Both he and Yoni Lang, who cooked alongside him in that kitchen, had their last days with the kitchen Sunday. While we may wonder if the place is going to serve food anymore, we’re going to take this time to talk about Lang, who went from riding 80 to 100 miles a day on a bicycle to pursue a love of sustainable cooking.

Lang was riding full time from about age 14 to 26, he says. He’d wake up, weigh his food, stretch, ride all day, record his stats. His dream was to race in Europe.

Today, his dream is looking more like a restaurant in New York. 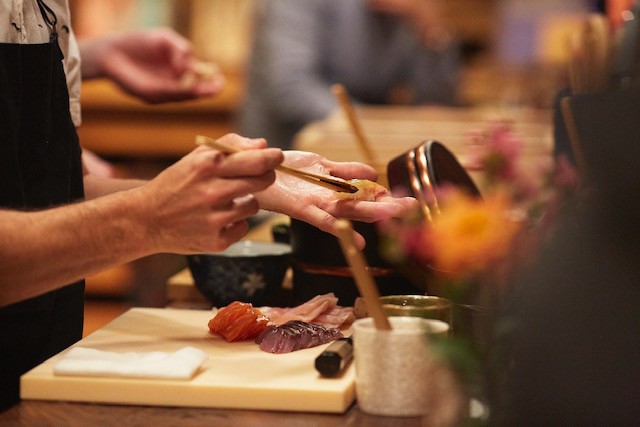 Yoni Lang prepares sushi at an event.
Rui Nakata
Lang, 31, is trained from various kitchens. He had always loved sushi, and in his hometown of Baton Rouge, he begged one of his favorite restaurants to let him learn to cook while he worked. No go. After seven visits and asks. They did take him as a barback, though, “letting” him work for free before and after shifts, where he ended up learning a great deal about the sushi bar.

He’d end up opening his own food truck in town, where he’d sell out regularly. It doesn’t sound weird, until you think more about the fact he was selling raw fish out of a truck in a humid, hot city. But it worked.

“But I wasn’t in that stage where I could progress on my own,” he says, which led him to call Austin to get into the Uchi concepts.

“I just started driving there before I even heard back,” he says. “They called when I was about halfway.”

Working at Uchiko, he learned from chef Masa Hamaya.

“He was the biggest influence on how I saw things,” Lang says. “It’s all about the small details.”

Details were something he was used to focusing on with riding, and the hours, by comparison, “weren’t that hard” for him.

Hamaya wasn’t the only lasting influence on Lang in Austin. 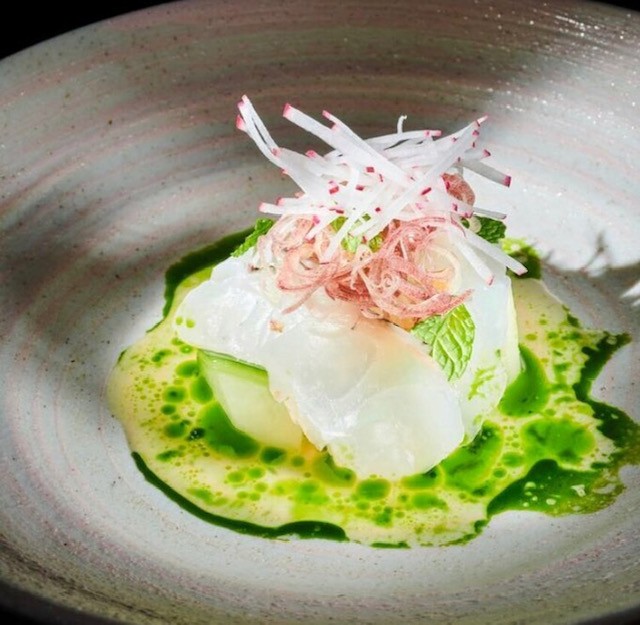 Lang's focus is commonly on raw fish at Wolf and the Fox Popup dinners.
Greg Rannells
“A lot of people don’t know, this is the third place that Yoni and I have worked together,” Orsini says. “We met in Austin in Uchiko: I was in the kitchen, he was in the sushi bar.”

Lang reconnected with Orsini at FT33 after spending about a year in San Francisco.

“I really wanted to keep learning about cooking rather than the raw aspect,” Lang says of his restaurant-hopping. “I learned some good stuff from Masa: If you go one place and learn one thing, it’s worth it.”

He continued that in working for Headington Companies’ Mirador. The last six months or so, he spent his time at Izkina (which it was called for most of his stay). Alongside that, he was running, and still runs, an underground dinner company with his girlfriend, Liz Scobee, who’s also in the industry.

But just last week, one week before he walked out of the Bar Formerly Known as Izkina, he launched another brand: Union Sushi Co.

“We had always planned on doing something,” he says of his business partner Jeff Miller. “It’s all sustainable sushi ... he focuses on sustainable fish, I focus on zero waste, preserving gardening.”

He references Monterey Bay Seafood Watch while talking about this, too. PSA: They have a super helpful app to help you make good choices in your seafood purchasing.

Now they’re doing pop-up dinners under that name, mostly in New York but also in other cities such as Dallas, Austin and Santa Monica, California. They have solid partnerships already; last week when they launched, they did so alongside Brooklyn Brewery.

To get to how he could contribute to this new partnership, Lang points to Orsini.

Yoni Lang (left) and Joel Orsini were the two-man show in the kitchen of Izkina. They were also behind the life sprouting atop the hostel's Deep Ellum roof.
Taylor Adams
“I thought Joel was probably the best person I could work with to learn more about zero waste,” Lang says. “It had to be one of the chillest kitchens to be in. It was just me, Joel, a garden and bees.”

“He’s by and large one of the most meticulous, clean-operating dudes,” Orsini says. “He was just as eager about everything as I was.

“He’s a constant busy bee. He’s always wanting to do things and learn something new. It’s something so many restaurants don't have anymore.”

As for him leaving: “My time there was always very dependent on Joel’s being there,” Lang says. 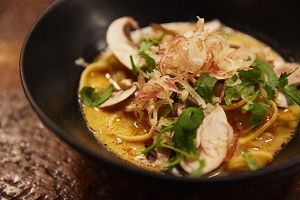 Much of Lang's work is going to avoid any waste while sourcing sustainably.
Brian Boulos
Lang is focusing on more pop-up and private dinners as he and his partner look for the right brick-and-mortar in New York.

With the Bar Formerly Known as Izkina, the pop-up dinners he does with Scobee and the new business, Lang doesn’t let sustainability and no waste leave his attention.

“It’s a terrifying thing when you talk to a fisherman and he says this whole stock of fish died before the season started because the water is too warm,” he says. “It’s our responsibility as restaurant owners, cooks, chefs, consumers ... no trash can in a restaurant is possible. No plastic wrap is possible.

“There was an old way, and there is a better way.”