Blackall Photography
Female founder Natasha DeHart is on a mission to prove blended whiskeys are better without substitutes.
Brewing beer and fermenting wine mark the beginning of the winding road for Natasha DeHart’s current passion: distilling and blending whiskey.

She and her husband Ryan DeHart just released their first blended whiskey in a pivot for their 7-year-old distillery in Lewisville. They’re putting all their chips in their new blended product.

Natasha is one of a few female founders in the whiskey game.

This month, Bendt Distilling Co. released Bendt No. 5, a blend of five distinct small-batch Texas whiskeys distilled, individually aged and blended together under one roof in Lewisville. It’s an aromatic blend of bourbon, malt, wheat, rye and light whiskeys.

“Making five individual whiskeys, aging them all in their own barrels and then blending them afterward is a whole lot of work for one product,” DeHart says. “We really love how this one makes all five of these whiskeys shine.” 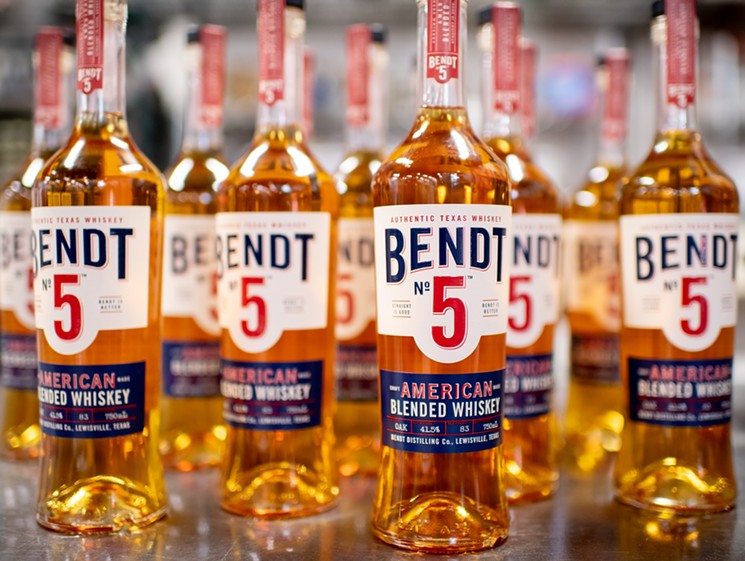 Bendt No. 5 is the first blended whiskey from the 7-year-old distillery, formerly known as Witherspoon Distilling.
Blackall Photography
The blend is made from nearly entirely Texas grain, sourced primarily from farms in North Texas. While American blended whiskeys can have up to 80% grain-neutral spirit, a potent spirit like Everclear substituted in blends, Bendt doesn’t use it. Their small-batch whiskeys are blended together with no substitutes or shortcuts.

“I am hoping we can change the perception of American blended whiskey. It can be truly flavorful and can be made of all whiskey,” DeHart says.

The operation has Mother Nature in mind. The rooftop is covered in solar panels powering a third of production with the Texas sun, and 12 tons of spent grain used each week feeds cattle at a North Texas ranch.

“We do our very best to be environmentally responsible as possible,” she says. “We’re always looking at ways we can do better on the conservation and reducing waste side.”

Natasha’s and Ryan’s love for spirits sparked while the couple were living in Munich, Germany, in the early 2000s. There, they adored the alcohol culture and craft beers, wines and whiskeys made all over the area. When the DeHarts returned to Dallas, they were disappointed with the selection they found before the craft beer boom, so they began homebrewing.

“Living in a foreign land, falling in love with the alcohol there and then not being able to find it ourselves, we started making our own,” DeHart says. “It started with homebrewing and evolved to the whiskey we love today.”

Bendt Distilling Co.'s tasting room is open on Fridays and Saturdays.
Blackall Photography
The distillery founded in 2012 was formerly known as Witherspoon Distillery, but the DeHarts are staking the future on something new.

“We changed the name of the company to match the blend, which is where we are planning the future of the distillery,” she says.

The distillery is in Lewisville just off Main Street in a former Piggly Wiggly. They have a large tasting room, a lounge and a 4,000-square-foot “whiskey garden” patio. In addition to the five whiskeys and the Bendt No. 5, there’s a craft cocktail menu.