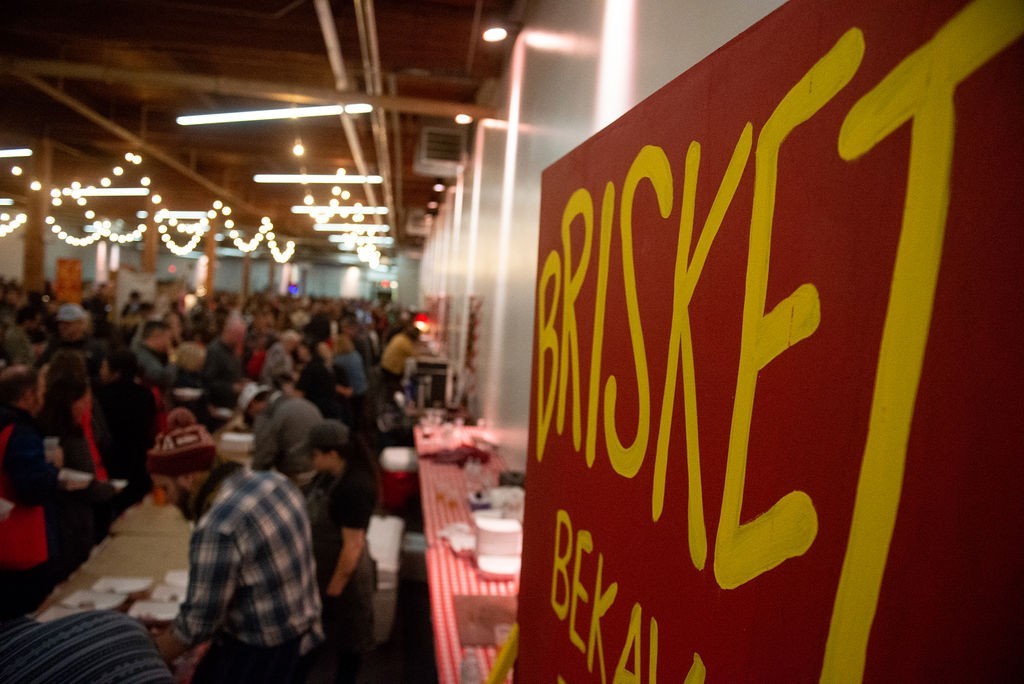 Brian Maschino
Meat Fight is back.
A foodie event known for smoked meats and cold beer with a cause-driven charity returns this November for its ninth year.

Meat Fight is a local barbecue competition like no other. This year, 16 Dallas chefs will smoke meats in four categories: brisket, sausage, burnt ends and wild-card tacos. Most important, it’s a party with a whole lot of fundraising.

In 2018, the group raised $225,000 for the second consecutive year, with all proceeds going directly to those living with multiple sclerosis, or MS. This year’s event on Nov. 10 has already sold out.

“Meat Fight is a little different than your typical competition,” says Alice Laussade, Meat Fight founder and CEO. “We have fancy Dallas chefs — James Beard winners and culinary badasses — where barbecue is not their everyday talent, and [we] put them at the smoker for fun competition.”

Jeana Johnson competing in the 2018 Meat Fight
Brian Maschino
Teams will begin smoking their meats the night before the event in preparation to feed 750 people expected this year. Half of the fun starts in the late-night hours when chefs add logs to the smoker and crack open a cold one. Brisket, burnt ends, sausage and pork will smoke all night as chefs kick back and enjoy the reunion over pecan and mesquite wood. Competing chefs may be experts in their respective kitchens, but smoking meat is not usually their focus.

“Obviously you want to do something you are proud of, but none of us are barbecue professionals,” says Janice Provost, executive chef at Parigi, who is competing this year. “There are definitely people who know more about this than I do. It’s a fun way to get out of our comfort zone and do something brand new.”

“I know nothing about smoked meats,” says Quiñones-Pittman, executive chef at Jose. “The best part of this event is about being yourself and stepping outside your element. Many of these chefs are friends, so we’re goofy and fun, friendly, but with a rivalry to win.”

Quiñones-Pittman is part of the team assigned the pork course.

Side dishes will be offered by 20 local restaurants, plus there will be whiskey samples from WhistlePig and beer from Lakewood Brewing Company, Four Corners Brewing Company and Tupps Brewery.

“This year, we have more chefs involved, more breweries involved and plenty of WhistlePig to go around for everyone,” Laussade says.

Meat Fight began as a backyard barbecue in 2010 when Laussade invited a few friends over as summer turned into fall.

“It started as just a kegger among some of my friends and chefs,” she says.

The following year, Laussade’s brother was diagnosed with MS, and Meat Fight became a fundraiser.

In 2011, three local foodies volunteered to judge the backyard barbecue: Brian Luscher from (then) The Grape, Justin and Diane Fourton of Pecan Lodge, and Daniel Vaughn, at the time a food blogger and now Texas Monthly’s barbecue editor.

“At the end of that gathering, they asked why it isn’t a public event,” Laussade says. “They told me, ‘If you want to make an impact, let’s open to the public.’ Very quickly this came together in a very real way. We were just talking over beers about this in the backyard.”

Professional chefs, not ones in barbecue, compete each year.
Brian Maschino
The following year more than $20,000 in donations poured in, and today Meat Fight raises more than $200,000. The proceeds directly benefit people living with MS.

“You’ll see that they put the money we raise to work immediately,” Laussade says. “After we announce our grand total, you will see people living with MS receiving the benefits from this event.”

Meat Fight has raised $1.7 million for the National MS Society since 2010 and allows people to participate in competitions through Meat Fight Endurance Labs.

“Personally, I have had employees and a dear friend that lost their mother to MS,” Provost says. “Ultimately, Meat Fight’s purpose is to find a cure.”

Over the years, the group has supported 39 athletes living with MS to compete in the Ironman 70.3 triathlon in Galveston with professional training, equipment and registration for the contest. Meat Bike has also provided a bike, helmet and gear to 245 people to participate in Bike MS, a two-day, 150-mile cycling challenge each year. Then, of course, comes the Dallas Marathon, where Meat Fight provides training, bibs and registration.

“All you need to bring is grit and determination,” Laussade says.

All anyone needs to bring to Meat Fight is an appetite and a koozie. You’ll likely have a beer in one hand and a plate of ’cue in the other most of the day. While most chefs describe Meat Fight as a fun, laid-back event, it’s primarily a competition, one that’s somehow both fierce and friendly.

The fundraiser forges friendships. Provost and Quiñones-Pittman met over the smoker back in 2013, and since then have competed in the Bike MS ride and band together with other chefs to offer exclusive dining experiences for the silent auction.

“AQ and I are besties now,” Provost says. “Meat Fight brought us together, and we’re inseparable today. It marked the beginning of a really good friendship.”

“Come for the barbecue and stay for the charity. We’re a ‘fun-lanthropy,’ and our impact is easy to see,” Laussade says. “I want to find a cure for my brother and all other people around the world living with this disease.”