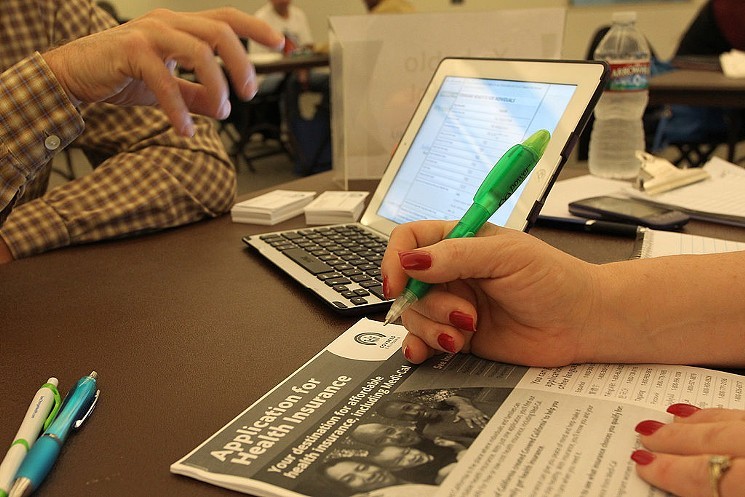 Getty Images
A new report highlights the impact on children under age 6.
Nearly a fifth of the nation’s youngest uninsured children live in Texas, a stark reminder that the state has some of the most restrictive policies in the nation governing healthcare benefits for its most vulnerable residents.

More than 8% of Texan children under the age of 6 are not insured, according to a report released Wednesday by Georgetown University researchers. That’s almost double the national rate.

The report is not surprising. A similar report, released in October, found that Texas had the highest uninsured rate in the nation among all children up to age 18.

Texas' increasing rate of uninsured small children mirrors a national trend, which has policy experts like Burak worried. The last few years have been a period of strong economic expansion, when more people would typically seek health insurance.

But since 2016, Texas' uninsured rate among young children increased by a percentage point.

“They already have a lot of uninsured kids, and they’re going in the wrong direction,” Burak said, referring to states like Texas during a webcast announcing the report. Medicaid enrollment has been linked to a variety of better outcomes later in life, from financial security to college completion, she added.

Only Alaska has a higher uninsured rate among children under age 6, a consequence of that state’s large population of indigenous people, who are far more likely to be uninsured. Texas’ problem, however, can be traced directly to decisions by state policymakers.

Whether children are insured depends on their parents. Those who can't afford it often obtain coverage through government programs like Medicaid and Children's Health Insurance Program, and participation by parents in these programs has been linked to a variety of better outcomes for their children later in life, from financial security to college completion, Burak said.

Texas is one of 14 states where policymakers have elected to not accept federal funding to expand Medicaid coverage to more low-income families. “Young children are more likely to be covered in states that have adopted the Medicaid expansion,” Burak added.


“Young children are more likely to be covered in states that have adopted the Medicaid expansion.” — Elisabeth Wright Burak

The crisis disproportionately impacts Hispanic families. Nearly 15% of Hispanic minors in Texas are uninsured, according to a separate report by the Georgetown researchers.

The Trump administration recently published changes to the "public charge" rule this year, which would allow immigration officials to consider enrollment in Medicaid when reviewing applications for green cards. The changes were blocked by federal judges after several states filed suit, but two of those injunctions have been lifted in recent weeks, paving the way for an eventual implementation of the rule change.

Around a quarter of Texas children have at least one parent who is not a citizen, according to the Center for Public Policy Priorities, an Austin-based policy institute. The latest numbers on low insurance rates among Hispanic children reinforce reports of the impending rule's "chilling effect." Immigrants, reports say, are forgoing lawful benefits out of fear of later being denied citizenship.

The state has put up other roadblocks as well. According to research by the center, participation in the state's Medicaid and CHIP programs has dropped in recent years, a result of cuts in outreach funding and new rules that add extensive red tape to the programs' enrollment process.

The cost of paying for care of the uninsured ultimately falls on taxpayers. In 2018 alone, the Parkland Health and Hospital System gave out more than $1 billion in un-reimbursed care. A third of its budget comes from local property taxes.

"We try to do what we can to help," he said. The hospital is expanding pediatric care to community clinics across the Dallas area to make follow-up appointments more convenient.

David Murphy, a researcher at the think tank Child Trends, explained to the Observer earlier this year how a lack of health insurance can create mounting problems for young kids, from irregular visits to the pediatrician to missed immunizations.

“When children don't have that regular check-in with a pediatrician or family practice provider, issues around sleep, diet, exercise — those kinds of things that are really important to stay healthy and to do well in school — those can suffer,” he said.