Alison McLean
Veal ragu cappelloni at The Charles is one of the reasons Dallas is in a golden age of pasta.
Beet salads, meat-and-cheese boards and grilled shishito peppers popped up on a lot of Dallas menus in 2019. But some bigger, broader trends also affected the way that we ate this year. Several were good, several were bad and others could go either way.

Let’s break them down.

Good: The Rise of the Asian Pop-Up Chefs

With the help of leaders like Jimmy Niwa, Reyna Duong and Donny Sirisavath, a new generation of Asian American chefs is taking Dallas by storm. The main venue, for now, is a series of night markets and pop-up events at Sandwich Hag, Khao Noodle Shop, the Bomb Factory and a variety of local breweries. But come 2020, we hope to see some of these talents making more headlines.

Ka-Tip Thai Street Food, which did the pop-up circuit for years, recently opened an acclaimed brick-and-mortar space in the Dallas Farmers Market. Saap Lao Kitchen, which sells brilliant beef jerky from its website, opened a storefront in Bedford this year. Some of the next stars we hope to see succeed include the quartet of Filipino American chefs behind Not Your Lola’s, another stellar pop-up called Ulam Modern Filipino Kitchen, the Nepalese dumplings from Momo Shack and Cheez-It fueled macaron business SneakerBaby.

Bad: All Our Food Writers Are Leaving 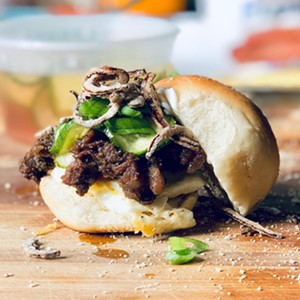 Ulam Modern Filipino Kitchen's beef tapa breakfast sandwich
Anna Swann
That’s a lot of brain drain, and it doesn’t include taco writer Jose Ralat, who now covers the entire state for Texas Monthly but still lives in Oak Cliff. At a moment when Dallas dining is unquestionably at a high point, and national attention is focusing on our city, pressure is on the few writers remaining to represent our city with accuracy and enthusiasm.

The responsibility is exciting, but it’s also daunting. Every word we write counts.

As an aside, if you’ve been waiting to jump in the food writing business yourself, now’s the time.

There has never been a better time to eat noodles in Dallas. Our pasta game is the strongest it’s ever been, and, maybe surprisingly, it’s not all because of Italian restaurants. Giuliano Matarese is doing incredible work at Mille Lire, yes, and so are David Uygur and Robert Baloga at Lucia, J Chastain at The Charles and Julian Barsotti at Nonna and Carbone’s.

But my favorite pastas in town are at Homewood and Sachet. And then there are the globe-hopping noodles Misti Norris makes at Petra and the Beast. Want an Asian bowl? Khao Noodle Shop is one of the best new restaurants in the country, beloved bar Cosmo’s serves killer bowls of pho and Chinese hand-pulled noodles are the stars at restaurants like Imperial Cuisine, Wu Wei Din and Xi’an Yummy Foods.

This is the golden age of rolled and cut — or hand-pulled — dough in Dallas. 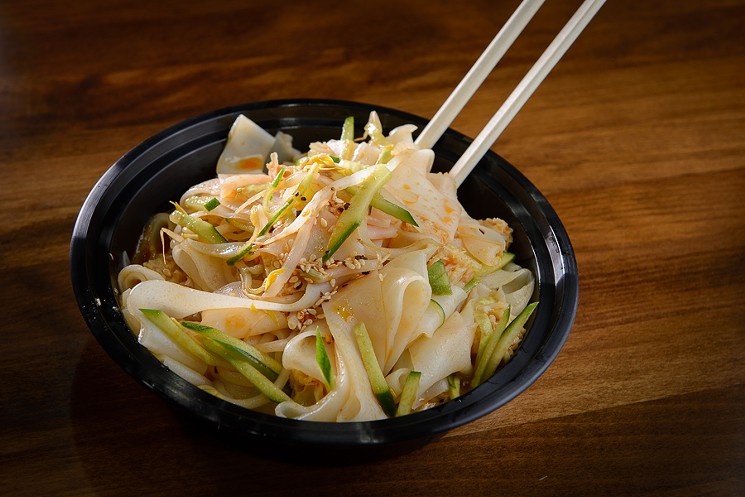 At the same time that casual restaurants proliferate and young chefs make their entries onto the stage, other Dallas restaurants are purveying $390 steaks, $4 deviled eggs (that’s $4 per egg), $35 enchiladas and a variety of new caviar service options. It’s a symptom of underlying income inequality fueling different economies for different diners.

The debate is raging on what effect extreme inequality has on a food scene; we’ve published editorials taking both sides. Ultimately, it’s pretty easy for a diner who can’t afford a $390 steak to simply not order it. But food writers who discuss such extravagances should be sure to inquire about issues like sustainability — the steak is flown in from Australia instead of being sourced locally — and economics.

Good: They Might Not Ruin the Bishop Arts District

OK, I’m a little out of my depth here, because I’m not an urban planner or an activist, just a guy who eats food. But the new development that has descended on Bishop Arts has, so far, offered up some pretty solid restaurants.

Losing El Corazon was a big blow to locals and Tex-Mex lovers. But well-thought-out concepts like La Reunion and Ceviche Oyster Bar have moved in, along with the newly-relocated taco shop Trompo and the already-beloved Tribal All Day Cafe. Food lovers across Dallas know about the Italian salumi at Macellaio and yakitori skewers at Salaryman, both of which have been featured in Texas Monthly.

For every misfire — a D Magazine review of Paradiso indicated the restaurant was made for Instagram, not hungry bellies — there’s an unexpected miracle like the slice of New Orleans that is Revelers Hall. The new apartment buildings are hideous, but as far as food goes, it’s so far, so good for the new Bishop Arts. 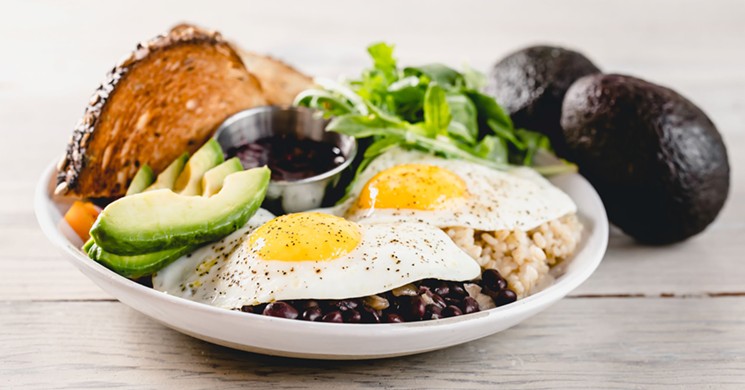 Maybe this is more of a pet peeve than a trend, but I’m seeing it around a lot right now. People want to eat fried food, but they don’t want to admit that the food is fried, so now menus across town are calling food “crispy.”

We can all be honest here, right? It’s not crispy because of some mysterious magic trick. It’s fried. Live a little!

Everyone from local chefs to national magazines noticed that this year, Dallas’ most interesting restaurant ideas were casual. Spots like Khao Noodle Shop and Ka-Tip Thai are as relaxed as restaurants get, and affordable, too. Even some high-end chefs, notably Matt McCallister, devoted themselves to restaurants where you can go more than once a year.

Another intriguing development has been the creation of high-end experiences in casual settings. Regino Rojas pioneered that at Revolver Taco Lounge, where customers can choose between tacos and margaritas in the front or a $130-per-person multi-hour tasting menu in the private back room. Misti Norris’ Saturday night tastings at Petra and the Beast are now booked months in advance. Even Stephan Pyles embraced the idea at Flora Street Cafe, although Fauna took a few months to find its chef, Peter Barlow, and its regular schedule, Fridays and Saturdays only.

The exciting point here is that a restaurant doesn’t need to be high-end to be ambitious. And even if it is, it doesn’t need to do so full time. Creative young chefs are finding ways to express themselves by thinking outside the 20th-century restaurant model. 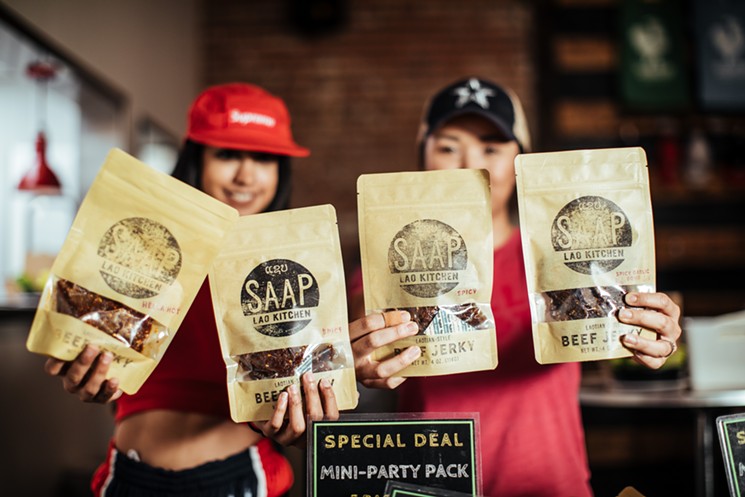 Saap Lao Kitchen's owners show off their popular beef jerky.
Kathy Tran
Good or Bad, Depending: Talent is Moving to the Suburbs

Dallas’ suburbs have been getting more and more exciting for a few years. The growth of Chinese restaurants in Plano, Nepalese in Irving and Korean in Carrollton have been just a few of the suburbs’ recent success stories.
Something slightly different is happening now: Established Dallas chefs are getting recruited out to the burbs because the burbs pay better and have lower overhead costs. This isn’t inherently a good or bad thing — or, rather, your opinion of it will depend on where you live. I’m an Oak Cliff dweller, so this development has brought me closer to area gas stations.

But this news has also deepened the connections between the food scenes of Dallas and its surrounding cities. And, although we’ve gotten some angry notes for including suburbs like Richardson and Farmers Branch in our Top 100 Restaurants, the truth is that as long as talent is flowing freely across municipal lines, North Texas food culture will only grow more unified.

Cuisine of the Year: Nepalese

2019 was the year of Nepal. Momos took Irving by storm, and pop-ups like Momo Shack brought the revolution to breweries across Dallas. Nepal’s iconic dumplings come in a variety of styles and with a range of fillings, which makes them perfect ambassadors for the mountainous Asian country with a surprisingly big immigrant community in the Dallas area.

What’s going to make a big impression on Dallasites in 2020? We’re hoping Filipino food will get a lot of media attention. It will be exciting to find out.