Lauren Drewes Daniels
Billy Flores of Bad Spanish Tacos
Billy Flores of Bad Spanish Tacos keeps his work area tight and clean. Not a single errant onion square or cilantro leaf lies anywhere but in their prescribed containers. No fingerprint smudges stain the table, no trails of salsa run down the sides of the sauce bottles. It’s simply clean, a theme of sorts that carries through to his food.

“I grew up cooking with grandparents,” Flores says. “They raised me. So, I watched my grandma cook all the time. That’s where I first learned to cook.”

Flores never quite conquered the native tongue of his father, who was Mexican.

“All my Mexican friends gave me shit for not speaking Spanish very well, so they called me ‘Bad Spanish.’ But, then my white friends never understood the Latin side of my world,” Flores says with a smile and a shrug.

He had another reason for using his nickname for his company title. It’s a nod to the purity of his tacos and ingredients: No BS. 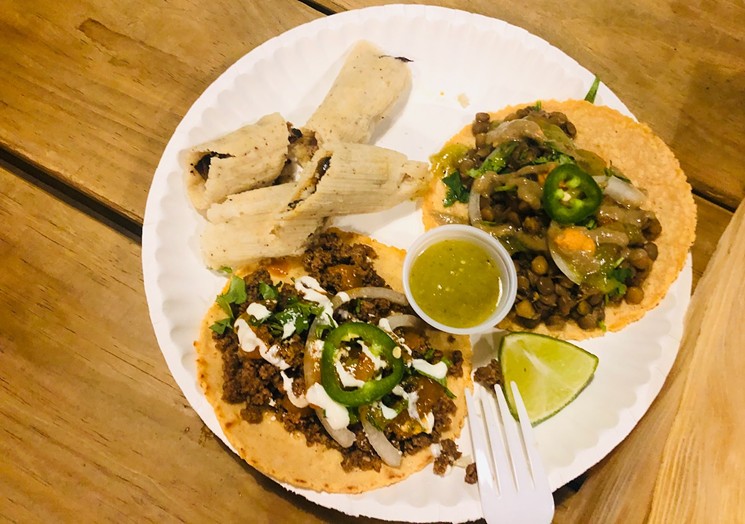 Eggplant, mushroom and chayote tamales, ground venison taco (left) and lentil carrot taco (right)
Lauren Drewes Daniels
“I press out all the tortillas fresh. I made these from scratch using mango nectar masa,” says Flores as he’s making a lentil taco for me. “Normally, I do lentils with cactus, but this time I used carrots instead.”

For years Flores worked in sales for a large soda company, but being tethered to an office wore on him. He was already cooking for friends and family pretty regularly, so one day he told his boss he was done with the 9 to 5. He was starting a taco empire — or at least a table. So, they promptly escorted him out of the building, and Bad Spanish was born.

Now, Flores smokes meat and preps food in the morning and sells tacos at night. He makes everything from scratch so that he can control all of the ingredients.

After losing about 100 pounds over the past year or so, Flores started paying really close attention to the ingredients in the food he was serving. He’s since found that he gets a lot of repeat business for that very reason. People will go to the breweries where he’s a regular and get plates of tacos and tamales to go, particularly for the vegetarian options.

“Making a vegetable taco delicious was something I took seriously,” Flores says. “I wanted a vegetarian taco heavy enough so that you could tell you had something to eat. And I like to balance carbs, protein and produce as much as possible.”

But it’s not all vegetarian, by any means. His menu features a full range of meats, including venison, pork and brisket.

On the night I visited him, the menu included carnitas tamales and eggplant, mushroom and chayote. For tacos, he had smoked brisket, pozole, mojo chicken, and lentil and carrot topped with two small dabs of red hummus. Others that are often in the rotation include sweet potato, eggplant, mushroom, smoked short ribs, sirloin with ancho sauce and mole verde.

Bad Spanish can be found somewhere five days a week. He usually takes Sundays and Mondays off but is consistently at Division Brewing in Arlington on Wednesdays and Fridays, Turning Point Beer in Bedford on Tuesdays and is on the regular rotation at Peticolas events. You can track him @BadSpanishTacos on Facebook.