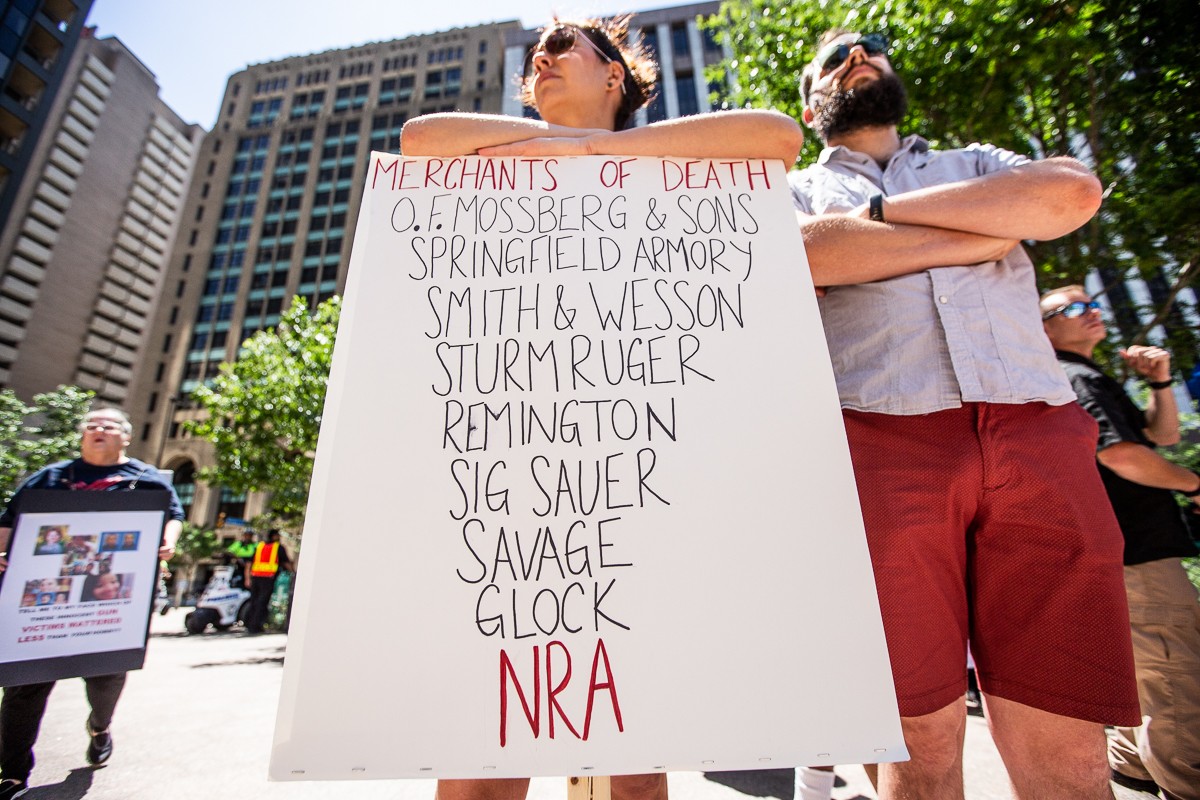 Melissa Hennings
Gun control activists in downtown Dallas gather blocks from the NRA's 2018 Annual Meetings.
Late last year, Texas Lt. Gov. Dan Patrick, never one to be mistaken for a moderate, struck perhaps the most conciliatory note of his political career when he said he supported closing the so-called "gun show loophole" and mandating background checks for all gun sales between strangers. Wednesday, a coalition of gun control groups made it clear that they plan to do everything in their power to elect a Legislature capable of holding Patrick accountable for his statements in 2021.

"I've seen firsthand over the last decade or so this shift in how Texans see gun violence," said Shannon Watts, the founder of Moms Demand Action. "Two things are happening right now in Texas that are contributing to that shift: The state is becoming younger and increasingly diverse and, after years of failure by lawmakers to address gun violence, gun safety has become a top issue for voters, especially in the suburbs."

Like many groups planning to pour money into Texas 2020, Gun Sense Majority: Texas views the suburbs surrounding Texas' largest cities as some of the state's biggest battlegrounds. The Texas House will be won or lost in places like Collin County and the Houston suburbs.


"We'll start by working to elect a gun-sense majority in the Texas state House — which has ignored gun safety and taken Texas backwards." — Shannon Watts

"We believe that Texas can be the next emerging battleground with gun safety at the tipping point," Watts said. "We'll start by  working to elect a gun-sense majority in the Texas state House — which has ignored gun safety and taken Texas backwards."

In recent legislative sessions, the Texas House has signed off on a bill allowing for the open-carry of handguns in the state and carrying handguns on college campuses. No meaningful gun control reforms have even been considered by the Legislature.

"We've identified more than 20 state House districts where we believe there are opportunities to elect new gun-sense candidates," Carr said. "Similarly to Virginia in 2019, nearly all of the battleground seats in Texas are housed in the fast-growing suburbs, where we know gun safety is a winning issue. ... More than 80% of our offensive targets are in the Dallas-Fort Worth or Houston metro areas."

Texas voters' opinions about gun control are moving with the rest of the U.S., in spite of the strong gun culture in the state, said Angie Cutler, senior vice president for research at the Global Strategy Group. Polling done by the group shows that Texans, especially in the suburbs targeted by the multimillion-dollar effort, are eager to curb gun violence.

"As mass shootings keep happening and more and more parents are hearing their kids, when they come home, talking about their lockdown drills at school, these voters are increasingly looking to their elected leaders to do something about it," Cutler said. "(They're) growing in their anger that leaders aren't doing anything about it."