There’s a legitimate reason that ZZ Top: That Little Ol’ Band From Texas, the documentary that premiered on Netflix last week, currently boasts a 100% Rotten Tomatoes score: It’s simply fantastic. There’s also a major reason the iconic trio with over 50 years under its belt has long been worthy of such a grand career film examination. The story of “Texas music” absolutely cannot be told without looking into the hard-charging impact of Billy F. Gibbons, Dusty Hill and Frank Beard. 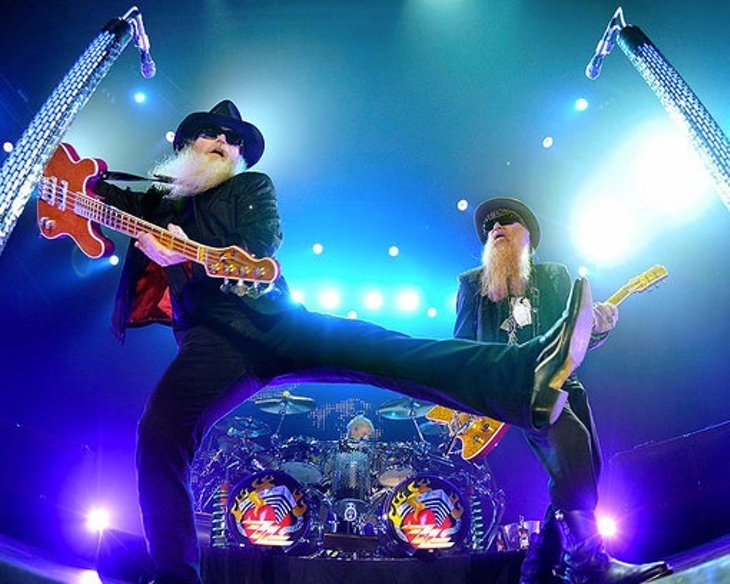 Billy Gibbons, Dusty Hill and Frank Beard have had their 50-year careers officially recognized by Dallas City Council and then-Mayor Mike Rawlings. Now a Netflix documentary tells their story.
Neil Zlozower
The long-lasting, and yes, current (more on that label later) iteration of ZZ Top is every bit as identifiable and linked to the grit, soul and groove of the Lone Star State as its icons Willie Nelson, Selena, Stevie Ray Vaughan, Bob Wills, T-Bone Walker and Beyoncé. As evidenced by the film’s A-list collection of celebrity devotees, including actor and musician Billy Bob Thornton, Queens of the Stone Age’s Josh Homme and Black Keys leader Dan Auerbach, the trio — which went from blues-forward roadhouse power trio to MTV-powered global megastars in the 1980s — have been transcendent Texas ambassadors for decades.

There’s not a lot in the film that the group’s most loyal, scholarly followers don’t already know, but for the rest of us, it’s an enjoyable peek into the band’s history — with some notable nuggets. Here are our four favorite takeaways.

The film gives its fair share of screen time to the history of each member, and as a result, the fact that Gibbons is the group’s sole original member is reintroduced for many who may not be aware. Hill and Beard didn’t join up with Gibbons until they both separately made their ways to Houston from North Texas, and after Gibbons dismissed his original two mates shortly after the group formed as a Doors-esque, organ-heavy trio.

Although the organ didn’t dominate the group’s vibe for long at all, such a shift means that ZZ Top is a part of a marquee list of trailblazing Texas bands that morphed into massive international successes only after a stylistic shift. In its earliest days, storied metal band Pantera toiled away as a glam-metal act, touring with ’80s relics such as Dokken, before going on to innovate and dominate with its groove-laden, Southern-fried take on thrash metal. And lest we forget, the Dixie Chicks began as a Western swingin’ bluegrass-flavored outfit before switching out lead singers and welcoming Natalie Maines into the fold and making a more commercially viable, modern style of radio-friendly country music.

Frank Beard Is Just the Coolest

The long-running joke that the drummer with the last name Beard was the band member without a trademark beard was indeed mentioned a couple of times, and the man himself even discussed his decision to opt for a clean-shaven face. He’s the one we’ve heard the least from over the years, so getting Beard's thoughts — on anything — is pretty cool. But more insightful were his frank, open tales of just how lowly his days of drug addiction were. The fact that he’s alive to not only recount the time he spent his first large check of $72,000 entirely on drugs, and to chuckle about the least “cost effective” ways of ingesting narcotics is basically a miracle.

But for our money, we’re ready for a podcast featuring only Beard listing the varmints and creatures the band took on its seminal 1976 Worldwide Texas Tour. In the slowest, syrupy-est Texas drawl imaginable, Beard, with a straight face, lists “buzzards, javelina pigs, rattlesnakes, buzzards” and more in an undeniably authentic way that makes us wish we were there more than we had before.

As we hinted above, the Worldwide Texas Tour must’ve been an epic happening. For the tour that Louder Sound calls “the craziest tour of the ’70s,” a gigantic Texas-shaped stage played host to the band's wild menagerie, not to mention the band. Even more impressive, is that in 1976-77 the band had yet to reach its commercial peak and was far from a proven arena-packing act. The tour lasted so long and was such a titanic undertaking, it was a key factor in the group taking an extended hiatus to recharge in the years following.

In the doc, the ZZ Top men discuss their role as “oddballs” and Southern-rock outsiders as a band that was brazenly Texan. The rock world seemingly hadn’t yet learned what the country music world was barely learning thanks to Willie Nelson’s return to Austin: Artists from Texas weren’t in a hurry to sound like everyone else. ZZ Top was Texan before being Texan was cool and this fabled tour proves it.

The Riffs Are Worth Revisiting

With apologies to the 2008 Jack White and Jimmy Page doc It Might Get Loud, this ZZ Top film is the ideal documentary to crank all the way to 11 if there ever was one. Classic cuts from the group’s earliest days are mixed in with live performance clips of the band setting up inside an empty Gruene Hall for a dazzlingly intoxicating effect.

It’s easy to become desensitized to some of the band’s biggest hits simply due to the fact that they’re overplayed. “Sharp Dressed Man” and “Legs” flooded radio waves and cable boxes in the mid-’80s and understandably for many fans, those songs haven’t exactly aged well. But hearing the blistering, greasy, blues-propelled opening licks to signature early tunes such as “La Grange” and “Brown Sugar,” or latter day jams like “Gotsta Get Paid,” make it plainly clear that it’s far too easy to take a band as long lasting and triumphant as ZZ Top far too much for granted.