What’s Good for the Car Wash Is Good for South Dallas, and That’s Really Bad

Jim Schutze
Dale Davenport admires a certain architectural model he came across last year in the offices of developers Matthews Southwest. The South Dallas Fair Park PID (noted on model) is a special taxing district Davenport helped create, now taken over by a Matthews-run nonprofit.
The wolf is at the door in South Dallas. The very near future could see massive dispossession and displacement there to dwarf the city’s long, ugly history elsewhere of dispossession and displacement.

The elected leadership of South Dallas not only will fail to raise a hand to protect it. They are already enabling its erasure.

A bitter irony — tinged with poetic justice — will be this: The legal process South Dallas leadership has corruptly inflicted on MLK car wash owner Dale Davenport is about to turn around and bite all South Dallas property owners in their backsides.

The lesson here is simple: If they could do it to the white man, they can and will do it to black people.

Last August I wrote a story that should have stopped the presses over at The Dallas Morning News, especially since their metro section has become a real estate section. I reported that the hottest land values in the city are in the historically poor and African American area on either side of Martin Luther King Jr. Boulevard, framed by Lamar Street and the Cedars area on the west and Fair Park to the east.

Sorry if this sounds self-involved, but I just can’t imagine a bigger real estate story in Dallas. The stereotype was always the opposite among people who weren’t paying attention (I include myself). The assumption was that the good land for investment had to be up north, where the rich white people live, not in South Dallas, occupied by poor people and minorities both black and Hispanic.

As it turns out, that assumption is now upside down. Last August I compared a block in the wealthy Park Cities area with a block in South Dallas and was able to show that the Park Cities block lost value in a recent year while the South Dallas block almost doubled in value.

I don’t know why. People have theories. We can talk about that another day. But while I was believing in stereotypes, other people were paying close attention to the reality.

My piece last August pointed out that Jack Matthews, a Canadian developer who has dominated the rebirth of the Cedars area to the west of South Dallas, has been making obvious efforts to have a certain say in what happens on MLK, including using a nonprofit to take over a special taxing district there.

The lesson here is simple. If they could do it to the white man, they can and will do it to black people.

South Dallas happens to be a part of the city where I have done a lot of reporting over a long period of time, so I am familiar with some of the recurring property issues there. Once home to a thriving black middle class (would have been upper if they had been white), South Dallas has suffered a great hollowing out of those solid home-owning residents as they have moved up and out.

Left behind are properties often burdened by decades of split inheritance and ownership, by conveyances that now have wobbly legal standing and in some cases by other hobbling obligations like unpaid taxes and fines. But people still live in those houses, especially old people.

As far as those people know and assume, those are still their houses and always have been. Nobody bothered them about it when nobody cared. Now somebody cares.

I still don’t see how the Morning News avoided chasing my story last August and putting it on Page 1 under huge World War II-era block-letter headlines: “THIS JUST IN: LAND RUSH IN SOUTH DALLAS!”

“SOUTH DALLAS A BETTER INVESTMENT THAN HIGHLAND PARK!” “OMG WHAT’S HAPPENING?” “KNOCK US OVER WITH A FEATHER!” “IS THIS A DREAM? SOMEBODY PLEASE WAKE US UP.”

On the other hand, it’s The Dallas Morning News, the newspaper whose motto should be, “All the news we want you to know.”

Finally last week, Ariana Giorgi and Hayat Norimine at the News did some great reporting on the story, identifying Matthews as one of the developers who had successfully lobbied Gov. Greg Abbott to designate South Dallas as one of the new federal tax-break zones — a potentially huge windfall for Matthews and other developers who might move into the area.

I say great reporting, because it was, but the story itself was hacked up, qualified and disarranged by editors so badly that the real point was almost inscrutable. Yes, there are legitimate questions about how these new tax breaks work and whether they will wind up serving their supposed legislative purpose.

But that’s not the story. The story is, “OMG! Jack Matthews! South Dallas! WTF?”

Please don’t think I am painting Matthews as a bad guy. His successes along Lamar in what was once a worn-out, blighted industrial zone are proof Matthews is an extremely able and far-sighted developer. His ability to spot the opportunity in the Cedars (new name) echoes a theme years earlier in what is now called Uptown (new name) along McKinney Avenue. It was developers not from Dallas, people who came here with fresh eyes, who saw in Uptown what local eyes could not imagine.

But in order for big things to happen in South Dallas, big changes have to happen in the ownership of the land, and the question is how. Who gets the dirty end of that stick? Guess.

As we saw just a few years ago when big, well-connected developers rode into West Dallas en masse, the developers themselves never really like to do the dirty stick-wielding. And why should they when they have their handmaidens at City Hall to do it for them?

Two years ago City Hall enacted the same dark pageant in West Dallas that it had carried out two decades earlier in Uptown. In the early 2000s, when developers first began looking seriously at Uptown, City Hall discovered a great crisis there of shoddy conditions and unscrupulous landlords, even threatening to use federal organized crime statutes against major landholders who refused to sell.

They sold. The developers bought. 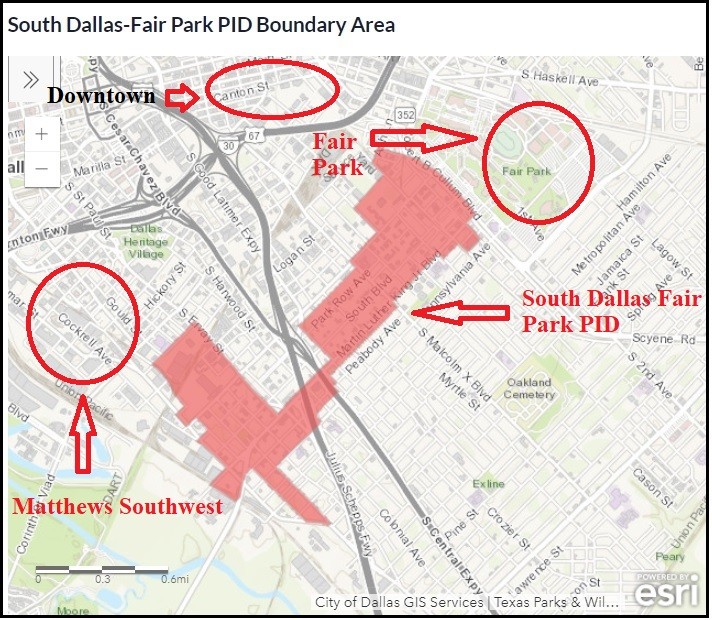 The South Dallas Fair Park Public Improvement District, now run by a Matthews nonprofit, is a bridge between the Matthews holdings in the Cedars and MLK Jr. Boulevard.
Jim Schutze
Exactly the same scenario unfolded a few years ago in West Dallas. All of a sudden, in a city with an utterly deplorable record on affordable housing, City Hall’s new great obsession was that poor tenants might be living in substandard housing. Never mind that the enforcement jihad unleashed by the city threatened to render most of those tenants homeless. It was the cleansing that counted.


The developers themselves never really like to do the dirty stick-wielding. And why should they when they have their handmaidens at City Hall to do it for them?

I have written about two million articles on Jim’s Car Wash on MLK, owned by Dale Davenport, who is sometimes somewhat unfairly known as “the only white man on MLK.” I say unfairly, because there are other white business owners on MLK and also because I have never once heard Davenport himself make race an issue.

But. Until very recently, I could not imagine any black business owner on MLK being set upon and persecuted the same way Davenport has been — cop cars left parked and locked all over his lot to prevent him from doing business, shots fired into his home, a special Texas legislative investigation that called the city’s treatment of Davenport a criminal racket.

Davenport was forced to close his car wash last June after a Dallas court declared it a crime hot spot and nuisance under state law. The judge in the case refused to consider the city’s own map of crime hot spots along MLK, which showed that the car wash was not in any of them.

When I wrote about that a week ago, a smart reader wrote to me personally to take issue with my reporting. I had compared crime at the car wash with crime in the upscale Victory development just north of downtown. I said my numbers showed that crime at Victory was greater than crime near the car wash, and it is, in hard numbers.

It’s a good point, and I should have addressed it in what I wrote a week ago. But the reader’s observation also tells me this: When the city gins up a case against a Dale Davenport, it makes no effort whatsoever to devise a consistent or meaningful measuring stick.

I have sat in court and listened to city officials and even sworn police officials offer evidence on a scale from anecdote to bald-faced lie about crime at the car wash. Never once have I seen even a shred of consistent scientific study or statistical measurement.

That means one thing. Agenda. The car wash case shows that when the city comes to court to force a change in ownership, it will say and do whatever it takes.

So now the snake turns. After its victory over the car wash, the city is expanding its use of Chapter 125 of the Texas Civil Practices and Remedies Code — the law used to shut down the car wash — to include more property owners in South Dallas.

That effort is in early stages. So far, no one has been taken to court. I haven’t succeeded yet in getting anybody to talk to me about it on the record. I will. I am aware of a very nascent effort to find pro bono legal representation for some of the property owners.

But lots of luck with that. A succession of City Council members representing South Dallas has already opened the door by aggressively pressing the city attorney to sue Davenport and the car wash. He did. It worked.

Now with some really serious money at stake, watch that same kind of legal persecution work on a lot of people who don’t look like Dale Davenport.