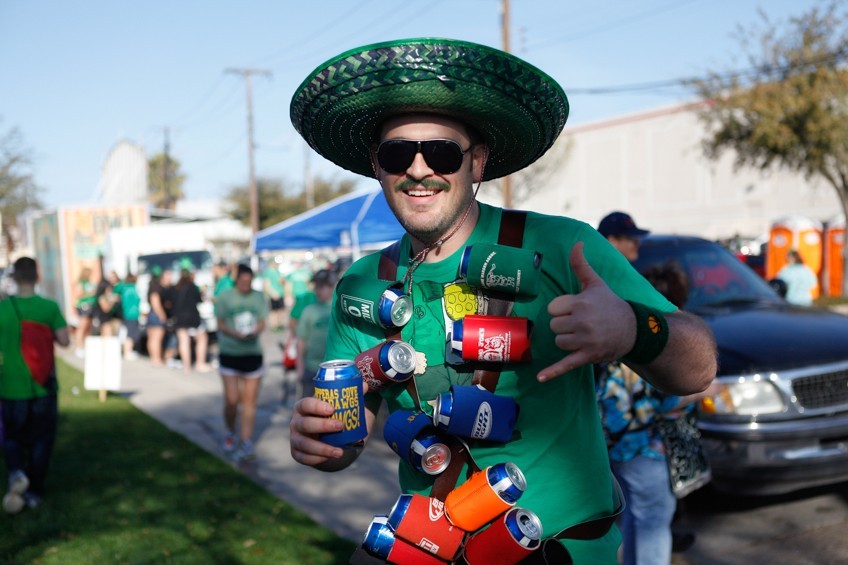 Stephen Masker
You know, St. Patrick's Day is technically a religious festival, but who are we to judge how one worships? The 41st annual Greenville Avenue parade is canceled.

Put your green hats away, Dallas. The St. Patrick’s Day Parade is canceled.

Following the lead of cities like Chicago and Boston, Dallas has officially canceled the Greenville Avenue celebration, which was scheduled for Saturday, March 14.

On Tuesday, a press release announced that the St. Paddy’s celebration was still on track, despite the fact that even Ireland was canceling St. Patrick’s Day. (Most of the country’s major public celebrations, like the one taking place in Dublin, were canceled this week.)

But as the World Health Organization declares the spread of COVID-19 is a pandemic, and as the virus moves into North Texas with three confirmed cases in Collin County and two in Dallas County, the Dallas organizers have reconsidered their decision.

"An event of this scale, without adequate public health protections, cannot be allowed to occur at this time," Dallas Mayor Eric Johnson said in a statement. "Our primary concern is the health, safety and welfare of our residents, and we will continue to take action accordingly."

And can we say, all things considered, that this isn’t much of a loss. Besides the death rate and widespread panic, and the fact that Italy is now closed, SXSW, Coachella and Ultra Festivals were also canceled, among many major concerts and events. While we feel for those who will experience financial losses as a result, can we all agree that St. Patrick’s Day is the dumbest of all holidays?

It’s a day that supposedly celebrates Irish heritage, but you hardly see anyone dancing a jig and eating a good, hearty shepherd’s pie. Instead, it’s become the bro holiday of choice, an excuse to throw up on the street and to get “kiss me I’m Irish” handsy with strangers. And all of this celebration of basic-ness goes down on a day that sees streets shut down so people can walk around in bright green, which flatters no one (sorry Billie Eilish), boasting of a holiday they have no understanding of whatsoever. Sometimes people dye their dogs green. And then they want to be kissed.

Of all cancellations, this is the one you should be least sad about. Sorry, not sorry. You can still day drink at home, though, and kiss your loved ones.