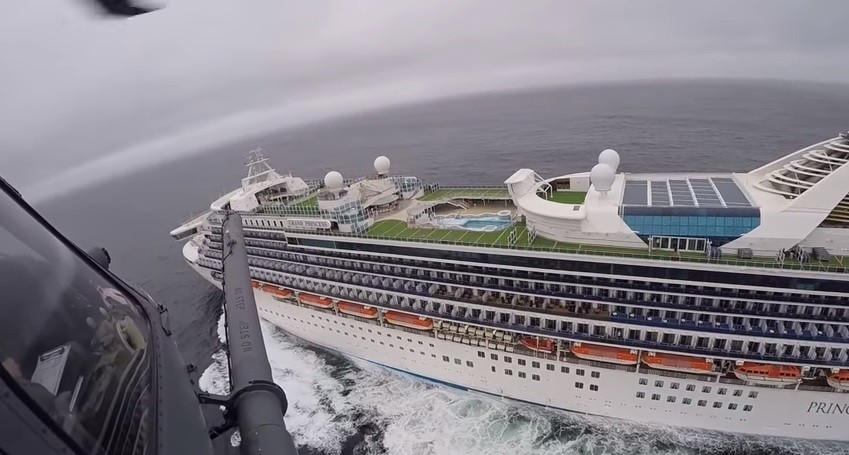 They can leave their small suite at will to walk the grounds, but the area where they are allowed to walk is surrounded by high chain-link fencing, patrolled by armed guards. No one needs to say explicitly what the guards are there to do.

“They have big lights they turn on at night to make sure nobody jumps the fence,” he says on the phone from Lackland Air Force Base.

“We are in a stockade of sorts,” he says gamely.

Anderson and his wife are not complaining. They have only praise for treatment they have received from the cruise line that operates the ship on which they were quarantined for six days before being sent with 148 other passengers to Lackland for an additional quarantine of 14 days.

At the base where they have another week’s stay ahead, Anderson says they have been well-treated. Their quarters are not a jail cell:

“It’s not big by any means. I’d call it a little corporate apartment. My understanding is these were designed for either cadets or for military officers. There’s a little TV room and kitchenette with a bar, a separate bedroom and a walk-in closet and bathroom.”

But something else is locked inside with them. The virus. They have watched ambulances whisk two people away from the base, presumably to hospitals, both former passengers aboard the Grand Princess, the ship that was taking them on a tour of Hawaii and Mexico when the virus struck.

“We’re in a situation where it’s a lockdown, but it’s not just a lockdown,” he says. “It’s a lockdown with a virus around us. So there is that stress. There is the potential to catch this virus, because it’s around us, and it was on the ship.”

Anderson and his wife are in their mid-60s. He was the city of Dallas preservation officer for 26 years and now does historic preservation consulting and specialized tours. His wife, Sara Bloch, is a dealer at Lost Again Antiques & Décor in the Dallas Design District.

“It’s a lockdown with a virus around us." — Jim Anderson

In the first week of March, the Grand Princess, a $450 million cruise ship carrying 3,500 passengers and 1,100 crew, was on the second leg of a 15-night, round-trip journey from San Francisco to Hawaii and Mexico. An elderly man who had been a passenger on the ship’s previous cruise died at home of coronavirus, and the ship was immediately rerouted from its destination in Mexico directly back to San Francisco.

Anderson and Bloch found themselves helpless pawns in a bizarre political drama. Military helicopters were landing and taking off from the ship, but the ship itself was not allowed to make port in San Francisco for four days, while the governor of California and the president of the United States argued.

At that point, coronavirus cases in the U.S. were still few. President Donald Trump, worried about the stock market, was still minimizing the threat of contagion. Trump said he was afraid that allowing the Grand Princess passengers to disembark in California would worsen the nation’s coronavirus numbers.

“I like the numbers where they are,” Trump said. “I don’t need to have the numbers double because of one ship that wasn’t our fault.”

But Trump’s intransigence was making a Flying Dutchman of the Grand Princess, which was left to maneuver off the coast until the politicians decided its fate.

Passengers were confined to their staterooms to contain the spread of the virus, but Anderson says he never saw tests or other equipment aboard being used to determine who was sick.

The Grand Princess was launched in 1998 at a cost of $450 million.
Ivan T. / Wikipedia
“We were quarantined and could not leave the room,” he says. “We had no masks, no equipment of any kind. Also we were never given a test on the ship.


“We sailed in a big square, around and around, but we couldn’t dock." — Jim Anderson

“We sailed in a big square, around and around, but we couldn’t dock. They wanted to keep the boat moving.

“We docked on the eighth. It was supposed to be those people who were infected or could have been infected, those people that were elderly and California residents who got off first.”

Anderson and his wife were not scheduled to be taken off the ship until the following day, March 9. But those plans took a curious turn.

“What was interesting to us as we looked out from our balcony, overlooking this whole experience of them unloading, was that Canada was in the first group to get off.

“So politically, Canada brought in a plane, took the people off the first day, and they were back in Canada before we even got off the boat. That’s how the politics from our country are screwing things up, and the Canadians are already home.”

Getting from the ship back to Texas the next day was not without challenge. “Our bus came probably around maybe 4 o’clock or so. They said up front that there was a problem with our plane. They said it was a mechanical issue.

“We sat on that bus for about four hours. Because we were still on the dock next to the boat, they let us get out and use porta-potties that were there on the dock.”

But Anderson says the delay on the dock had an upside — an opportunity for them to get to know some of the doctors who had come to San Francisco to help fight the contagion.

“We talked to all the doctors in the medic tent, and they were all really friendly. They were wonderful.

“They were the doctors who went to Katrina and Puerto Rico. From what I understand, these are regular doctors that take time off to help with emergency preparedness.

“They admitted that they’re not making very much money when they’re doing this, but they do it because they want to be involved.”

From cooling their heels in their staterooms on the ship for nearly a week without testing, suddenly they were crowding onto buses without masks and using portable toilets without sanitizing gear, all of which seemed to mock the whole idea of quarantine. But at least when they finally got to the plane, Anderson says, things began looking up in other ways.

“It was a private airplane kind of like a corporate jet. It was big. It had probably 150-200 seats, all leather seats. It was very nice. Everything was first class.”

They got to Lackland AFB at about 4 in the morning and discovered they were being given comfortable quarters. The meals provided by the base have been good, Anderson says, and he can order whatever he and his wife want from a nearby H-E-B grocery store, including beer and wine.

He says Princess Cruises have been “extremely generous.” The cruise line not only has agreed to refund the full cost of the trip itself but additional expenses normally paid for by passengers like special meals, bar tabs, even clothing purchased in the ship’s shops, as well as hotel expenses in San Francisco and airfare. In addition, the line is giving them a voucher for a free cruise after March 30, 2021 — a trip he says they intend to take.

For all the tension and uncertainty they experienced themselves, Anderson says he feels compassion for another set of people he saw on the ship: “There are some people you see on a cruise, this is the last trip of their life. They’re a stage 4 cancer victim or very, very elderly people that can hardly walk or in wheelchairs. And you can tell that is something they are doing because it’s their last thing to do.”

He says he sees these people now at Lackland: “There are some elderly people I feel very badly for. They’re not doing well. This is not something an 80- or 90-year-old can deal with. They are not doing well.

“There are also a couple of horror stories. A couple told us their 90-year-old father was separated from them. He is in Atlanta at another base.”

Anderson and his wife are travel-wise survivors. I ask him if he can get a real drink anywhere. He says yes.

“We smuggled booze along. I take water bottles and fill 'em up with bourbon or whiskey. I put it back in the shrink wrapped six-pack container. I’m good at that.”

He stresses again that he has no complaint about how things are being handled at Lackland. I ask him what the days are like.

“It’s very, very boring,” he says. “It’s stressful, because when you go outside you can’t touch anything. You don’t touch the handrails. When we go out, we don’t pick anything up. We wash our hands when we get back.

“We have television. There are two televisions, one in the living room and one in the bedroom. It’s limited. We don’t have movie channels. You watch CNN and whatever you can find on basic cable. Sara and I read a little bit, talk to the neighbors. It’s boring.”

He knows that while they are locked away, the world outside the guarded chain-link fences is changing by the hour. “Literally this whole thing exploded since we have been quarantined and, as you well know, it has gone around the country. What’s happening to us is now happening to everybody. We just happened to be the first.”

They are among the first to experience what may soon become a commonplace  — the disruption of our lives, the abrogation of our freedoms, the fear of an invisible force hunting and taking down people close to us. I ask if, as one of the first, Anderson knows something now, something he can tell the rest of us who are still waiting.

“We just have to realize that these things in life happen to people,” he says. “We happen to have been in a bad place at a bad time. But I think what it comes down to is that you just have to be patient and persevere.”