Good to Go: Saap Lao Kitchen's Kit Is Worth the Drive for Pickup 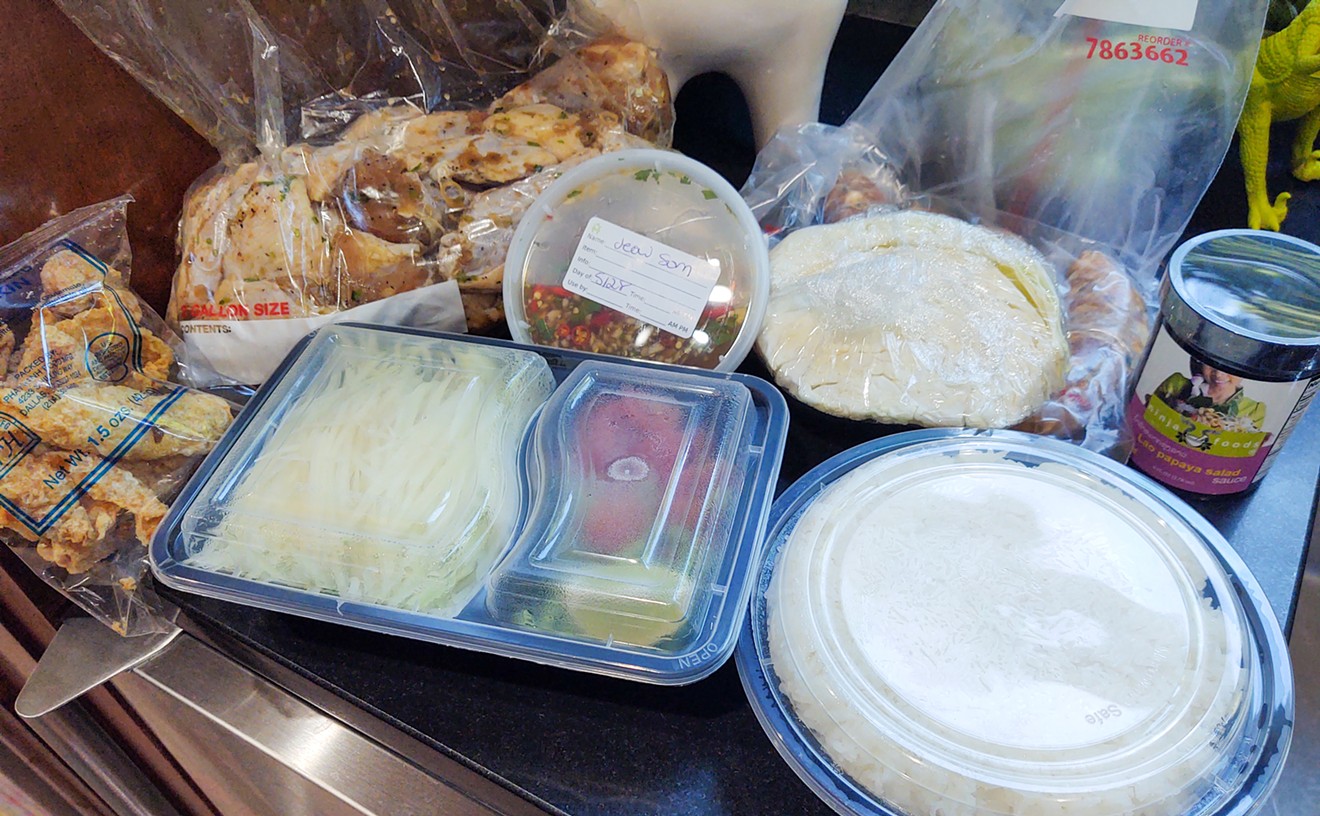 Even in Normal Times I probably don’t hit the suburbs for food often enough. Frankly, I don’t like suburbs, and when you live in Dallas, you’re always going to wind up driving by some awesome restaurants as you’re trekking out to the hinterlands.

In COVID Times, I’m so socially distant that I’m like a low-rent version of Howard Hughes. It’s possible I forgot how to drive.

So when a neighbor offered to drive to Bedford (BEDFORD!) to pick up a Laotian feast, that was the only way I was going to try it.

The thing about the mid-cities is that they attract such a large number and variety of AAPI (Asian Americans and Pacific Islanders) immigrants, and where there are a lot of immigrants, there will soon be a lot of great immigrant cuisine.

If your whole exposure to Laos is Kahn Souphanousinphone calling Hank Hill “stupid redneck,” you’re going to want to check out Saap Lao Kitchen. Laos is so much more than hilarious insults.

For $45, we got the Lao Food Quarantine Kit, which was big enough that my neighbor and I shouldn’t have both bought our own. One kit can feed four easily.

You get about 3 pounds of savory ping gai chicken wings raw and well marinated, four large links of sai oua sausage, sticky rice, a papaya salad kit and a little tub of jeow som dipping sauce. On a per-calorie basis, it’s a steal.

In the world of quarantine food kits, we always appreciate clear instructions.
Philip Kingston
The kit has to be cooked only in the most basic way. The salad arrives in a divided container with julienned papaya on one side and the accouterments on the other. Mix in a bowl with the included dressing, and you’re done. The salad was the least exciting part of the meal. It needs something other than papaya as a medium. If you’re used to the Vietnamese version of this dish, you’ll miss the carrot.

The meats are where it’s at. Both the sausage and the wings just have to be dumped out of their bags onto baking sheets and baked for about 30 minutes and they come out perfectly. My neighbor grilled everything, and that might be an even better idea.

Cooking is easy on this one: throw on a sheet tray and bake.
Philip Kingston
Lao sausage has coarse cubes of fatty pork and a ton of herbs. The contrast is delicious. Lao sausage makes western sausage taste boring.

The wings have a brilliant sweet and salty marinade, and everything is heavy on the fish sauce. I suspect grandma’s recipe is a little spicier, but these are made for a broader crowd. The jeow som was full of chilies and added a bit more heat.

In addition to the meal kit, we tried khao piak sen, which is Lao chicken noodle soup: the noodles are tapioca, and the broth has kaffir lime, ginger and fish sauce. I may never eat the western version again.

The jerky everyone's crazy about
Philip Kingston
Saap Lao is maybe best known for its beef jerky, which is medium-dry and covered with a spicy glaze. I tried classic, spicy and Hella Hot. All were delicious and accurately named. Pick your spice level, and you’ll love this stuff.

They’re only offering the meal kits and soups on the weekend, and they’ve sold out quickly the last two weeks, so watch the website carefully or sign up for the newsletter.