Paige Stewart
Brothers Juan (left) and Brent Reaves produce a post for social media.
As many restaurants close permanently during the coronavirus pandemic, others pivot and find new ways to stay open, and some are leaning heavily into social media.

For brothers Juan and Brent Reaves, owners of Smokey John's Bar-B-Que & Home Cooking, social media has been vital in surviving the pandemic.

“There [are] tons of people that are closing right now, and most of the people closing are people who didn't have a social media presence,” Brent says.

Juan and Brent frequently post to their business' Facebook and Instagram accounts as part of their survival plan. In the past, they often went live on Facebook, but once the shutdown happened, going live and constant posting was a part of promoting and informing customers.

“The part of what we were doing with Facebook live is educating whoever we could in front of our [live feed]: 'Hey, we're still here. We're battling the same things as you. We're learning as we go. It's all new,'” Juan says. “And [we're] just really trying to connect and keep that continuity with the people that we had and then and introduce ourselves to the people that we didn't.”

While the brothers were already posting regularly — a funny video or a post about a special — now they're going live every day at closing time. They are just having a simple conversation with followers, friends and anyone happening to drop in on their live feed. It's causing them to get attention from all over the place. For hundreds, it has become must-watch screen time.

“A lady told me she was just looking for something and we popped up so she just pushed play and she started watching,” Brent says. “So she's been watching for like three weeks. She's never been here.”

Spending all their time posting to Facebook and Instagram and hanging out with customers is proving to be not just a casual act. A chance catering gig for the Dallas Mavericks turned into significant revenue and a viral post for Smokey John's.

“A friend of ours referred us to the Mavericks, and they were doing something at Parkland. So they called us, we did their order, we pumped it hard on social media that we did this order for the Mavericks, for Justin Jackson of the Mavericks — he paid for it,” Juan says.

Fox 4 picked up the story about the catering job for The Mavericks' player, and because of slow sports news due to the coronavirus, the story was shown a few times. It became almost sort of a commercial spot for the restaurant.

“People started saying, 'We saw y'all's commercial,' and I was like, 'We don't have any commercials,' and they would say, 'I saw y'all on Channel 4.' They kept running the story,” Juan says. “The Mavericks reposted it. It got so much traction it helped drive business. That was a direct result of social media. That was a huge part of us sustaining our business.”

Val's Cheesecake on Lower Greenville.
courtesy of Valery Jean-Bart
The Reaves brothers aren't the only ones getting creative and using social media to stay in business. Valery Jean-Bart, owner of Val's Cheesecakes, knew he had to do something. Sitting at home, Jean-Bart decided to reach out to friends for ideas. He sent a mass text message to friends who were local Instagram influencers and talked about Takeout Tuesday.

“So Takeout Tuesday started as me on the sofa composing a text to over 30 influencers and bloggers saying, 'Hey, I don't get to see you guys a lot. I don't know what you're doing, but there must be ways that we can see what's important to each of us.' I want to see what we can do as a community to help the restaurant owners, bar owners,” Jean-Bart says.

“You had several influencers who said, 'You can do this. You can do that,' and then it grew into a Group on Facebook and an Instagram account. I had the idea, but these influencers helped me.”

Each Tuesday, a different neighborhood is featured, and the restaurants offer discounts and specials. The first Takeout Tuesday, which was Aug. 3, featured Val's own Lower Greenville location. Other areas of Dallas and suburban cities have also been included. 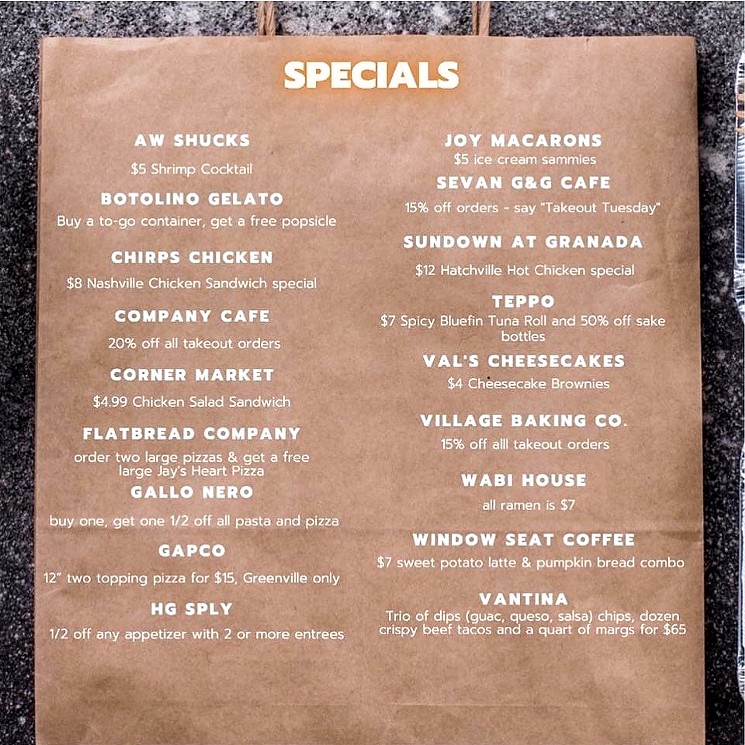 The whole social media push may seem excessive or trite, but Val saw a difference in his Tuesday sales after the first push.

Using social media to keep the doors open and lights on is not a bad idea. Brent Reaves thinks posting could prevent a proprietor from becoming another causality to the coronavirus pandemic.