TC Fleming
The hue isn't off in these photos: These new McNuggets are quite red.
We’ve had six presidents since 1981, but only one kind of McNuggets.

There are certainly readers who have lived in a world without them, but the majority of us probably can’t easily call up memories of a McNuggets-less universe.

McDonald’s modified the recipe in 2016 to improve nutrition, but the flavoring has remained unchanged until now. 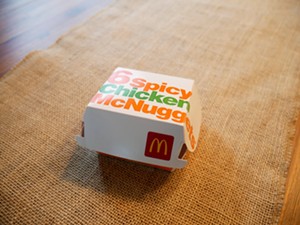 If you happened to be around for the opening day of the Spicy McNuggets circus and ordered a six-piece on the McDonald’s app, you would’ve unlocked a BOGO offer.

Ordering ahead fits seamlessly with their preexisting workflow. They already have a bunch of nuggets sitting there under warming lamps: Using the app lets them know to bag an order with a minimum amount of effort/communication, which is always the goal at a fast-food joint.

With my free second set of nuggets, I opted for the McNuggets Classique, partly to have a control group to contrast the new nuggets, and partly to help me cool down after dipping my tongue in the potential fire of spicy chicken.

While controversial, ordering a set of mixed nuggets may be a good way, perhaps the only way, for people with low spice-tolerances to live life on the edge. I’ve encountered some resistance at Wendy’s in the past when trying to order a set of mixed nuggets, but if your McDonald’s location does allow it, give it a whirl.

As to the super-red nuggets themselves, they’re wonderful. It’s the perfect amount of spice. You feel the heat, but it’s more about flavor than winning Scoville competitions. Plus, you can absolutely house a six-piece without looking like a Looney Tunes character that’s just been pranked. 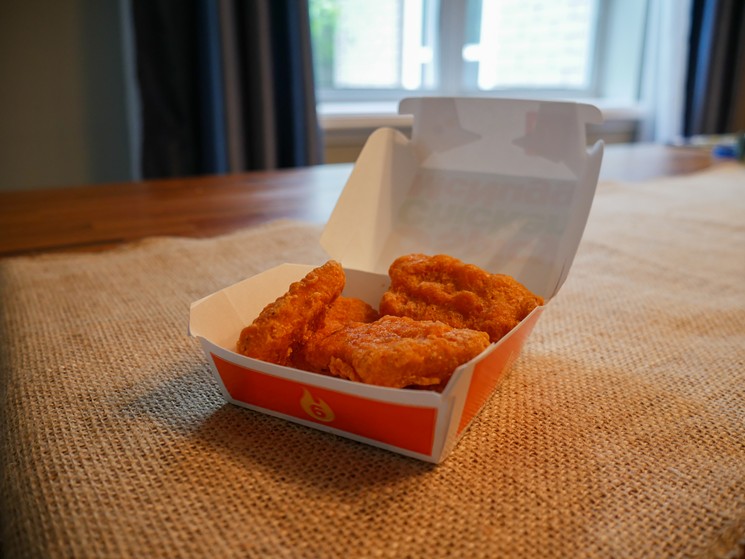 How close a shot is appropraite for fast food chicken? (We dare not go closer than this.)
TC Fleming
With the batch I had, the chicken itself was on the dry side, as were the regular nuggets. So I would chalk that up to the general inconsistency of fast-food restaurants: You never know when you’re catching a batch that’s been under those lamps for awhile.

There's also a new Mighty Hot sauce — a blend of red jalapeños, cayenne pepper, garlic and a hint of sweetness if you need more to add to these spicy McNuggets. On my visit, the ranch was an appropriate complement, though.

For the first time we have two varieties of McNuggets to pick from. There’s a lot going wrong in the world these days, but spicy McNuggets isn’t one of them.